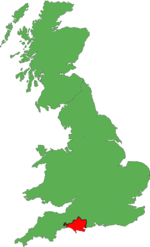 The Serrene Republick off Dorsette upon unilateral declaration of independence.

Dorset (pronounced 'dooooooorrrrsit' by locals) is a country located mostly on the British Isles. An aggressive nation, the local government was responsible for the Great Dorset War, in which the county of Dorset invaded and occupied most of Europe, and was eventually to take over the world, proclaiming its possessions to be Greater Dorset. The people from Dorset are known to be simpletons without the ability to pronounce their T's.

Dorset's rise to prominence was in 1979, when the Dorset Imperial Socialist Worker's Party (DISWP) quickly rose to power and unilaterally declared independence from Britain. Dorset was known as the Serrene Republick off Dorsette for a short while, until the Party employed someone who could spell to write its declarations, whereupon the name was changed to The Holy Dorset Empire . The capital of Dorset is Weymouth as the bourgh of Weymouth and Portland are holding the sailing event of the 2012 olympics. The big boss of Dorset is called Sir I Phone, he's in charge of Road TAX, House TAX and Swimming TAX at 0.35%. Dorset is a very expensive place to live, for example Sandbanks near Poole is known to the Dorset People as 'Millionaires Row'.For several years now the Dorset Economy has been based on the sale of Dorset Knobs and tourism. Feel free to come to Dorset for a day or two as it's a free day out (bear in mind to make no more than 2 visits a week as you will be charged for this at £250 a day. If paying weekly 2390% APR.)

The régime of Dorset has been characterised by the following ideological influences: 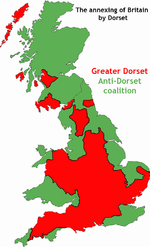 Greater Dorset a few weeks into the Great Dorset War

The Great Dorset War was started when the then Emperor of Dorset, Tony Woodward, got a bit sick and tired of only being able to rule a tiny bit of Britain, and decided that he would take over the world to give himself something more interesting to do. It was at this point the Isle of Wight decided to lift it's anchor and leave, the last time this tactic was used was when Christianity threatened the island, they were right to treat Dorset with the same respect and indignation.

The armies of Dorset quickly lined its borders, and with the help of an evil tactical genius named James Woodward (son of the Emperor), who was quickly made first in command of Dorset's armed forces, most of England and North Wales were soon annexed. Dorset agents worked to agitate resentment of the British government in areas uncaptured, and the Dorsetian navy captured Bute and the Ayrshire area of Scotland, the Isle of Man, and the Outer Hebrides without heavy losses. The Newcastle-upon-tyne area soon fell to Greater Dorset as a result of airlifted DISWP propaganda leafleting, and the Dorset army subsequently managed to secure a large area around Carlisle under its influence, most of which consisted of moorland and sheep, which were very easy to convince.

The national anthem was quickly changed to God save our Real Ale and cities were banned. London north of the Thames was renamed New Champernhayes Marsh and Manchester was initially renamed New Poole. However, the people of Manchester soon complained about this (as they didn't want to be associated with an inbread town like Poole yeerrrr sailor jim...), so the city's name was changed to Twat, as it remains today. The capital of Greater Dorset was in great dispute, eventually the village of Burton Bradstock was chosen, with the houses of Parliament to be placed in a small hamlet above Iwerne called Knob Farm.

South Wales was never invaded by Dorset. But let's face it - who would want to own South Wales?

By 1980, the areas of of Britain that were not under Dorsetian rule, bowed down to Emperor Woodward and thus fell under the rule of the Holy Dorset Empire.

Encouraged by his success in Britain (it was a walkover), His Serence and Drunken Excellency, Emperor Woodward launched an assault against Europe, starting off with an attempted takeover of Iceland by naval forces stationed on Orkney. A small fleet was launched across the Channel but France surrendered before they reached land. Belgium, Portugal, Denmark and Romania immediately allied with Dorset, largely because they were all irrelevant and pointless countries that would never get any glory otherwise.

Europe was quickly overwhelmed. By 1981, most of Spain and Italy were taken. The Italians held out for 14 days at Castel D'Ablo but were slaughtered when the Dorsetians tricked them into opening the castle when a Dorsetian disguised as the Pope walked up to the building and knocked on the door. As Italy fell, Spain to was quickly over run by General George Hinde who wisely used the Air Force to knock out fortified Spanish defences before ordering ground troops into the nation.

In 1983, as a last ditch attempt, Germany and Poland allied (well, I didn't see that coming!) and launched a fierce attack on North Eastern France, Romania and Holland. As the Romanians tried to fend off the German attack, the Dorsetian fleet set sail from Skapa Flow, and blockaded the German ports. Within three weeks Germany was crippled from within. Famine and riots spread like wild fire through the country. Germany retreated from North Eastern France and Holland, in order to bring about order within its own borders. Supreme Commander Woodward took this oppotunity and assembled a quick invasion force. The launch was spear-headed by the elite of the Dorsetian army, the Commando Guerilla Reconnaissance Unit (CGRU). As these black-hearted 'droids' entered Germany, panic spread like it had done in France two years previously. Germany fell within two weeks, leaving Poland to defend herself.

Meanwile, the Italian dynasty, including the Pope, had taken shelter on the secure island of Sicily. Towards the end of the 1960s, Italy had used Sicily as its southern defence. It had been well-equipped with the most up to date weponry, such as the 'yoghurt throwing machine' and the 'ICE' machine (In Cases of an Emergency).

After Dorset defeated Europe in brutal and blodthirsty war known to man, not to mention the fact that the Dorsetian's main weapon were knotted ropes made by the small(ish) Dorset town of Bridport, Lucy Tweed (who was related by insestuous marriage to everyone in Europe), feeling disgruntled by the outcome of the war, went into a fit of spontaneous rage in which she took it upon herself to devour the three remaining European citizens.