From Uncyclopedia, the content-free encyclopedia
(Redirected from Independence)
Jump to navigation Jump to search

Independence Day, War of the Worlds but with more CGI, is a movie about the second American Revolution and the birth of the "new" United States. The main plot is an attempted alien, British, and Cambodian takeover of the United States, which ultimately fails, because God likes America more. The movie received countless bad reviews from critics, but did reasonably well at the box office, almost (but not quite) making a profit, due in large part to its "eye-popping" special effects. The movie was not overly patriotic in any way.

The movie begins in the late 20th century, just as America has proven that it is more awesome than anywhere else. Naturally jealous, the British can do nothing about it. However, when a mysterious meteor crashes outside London, they get help! This meteor contained aliens, as all meteors do, which decided to help the British, by blowing up a few US cities with pretty green light. Apparently, they liked tea. So, President Abraham Ronald Roosevelt sends a division of fighter jets to stop them, capably co-led by Will Smith and George Washington. Unfortunately, human resistance to the British and the aliens is futile, as they have force-fields. Green, glowy force-fields.

Naturally, the Americans soon developed a solution, without the help of any other countries, or the useless UN, which was still voting on whether or not to trade with the aliens. American ingenuity was shown by Ben Franklin, as he developed a computer virus which would make the aliens blow up, in a "spectacular" fashion. Obviously, the aliens just happen to conveniently use Macs (all higher lifeforms use Macs!) also leading to the first ever Mac virus being created. He felt that the movie war needed to end like all the others had, with a giant, CGI-generated explosion. Unfortunately, the alien mothership happens to be floating over Area 51 when it is disabled, so it crashes into the base, killing thousands of gypsies hillbillies people and destroying all remnants of America's air supremacy. The heroes are too busy watching all of the neat explosions in the sky to notice.

We meet George as a young fighter pilot with a love for opium. His fighter unit smokes opium according to their motto, "only after the fat lady sings," or once victory is achieved. But, George's motto has always been "only after... ah fuck it I need my fix." He is in a sexual engagement with a stripper, and he is sometimes known to lock her child in his glovebox, usually because they don't get along. Sometimes, though, he just finds it funny. Later, he marries the stripper, after he gets her pregnant. George hates the British because they ruined his weekend with their invasion.

Ben is a cable repair man with an abusive father. He loves the environment and frequently rapes those who do not recycle, using his lightening rod. He was an abusive husband, so his wife left him. Ben is also a certified genius, as well as an annoying know-it-all, whose only purpose in life and the movie is to serve as a deux ex machina. In the end, Benjamin Franklin picks up an opium addiction from George Washington, which his ex-wife thinks is hilarious.

A.R.L. is the president at the time of the the attack. He becomes "president for life" after he takes all the credit for stopping the invasion. He also pilots a fighter jet to help take out the British. He gets shot by a British invader off of a grassy wheelchair in an opera house and he dies of an illness.

Sam is the inventor of whiskey and is constantly "sampling" his magic product in order to perfect his legendary ale. He has some children, that are the result of his long drunken escapades, and recently got fired from being the town drunk. The town felt that he was "just too drunk" for the job. He somehow saves the day when he violates his parole and pilots a military fighter jet while drunk, and smashes it into a British superweapon after mistaking it for a larger then normal beer truck. 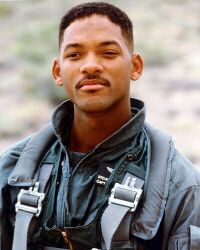 When he isn't chillin', maxin' and relaxin' all cool with his stripper hoe, he is one of the fighter pilots, and co-commands his division along with George Washington. He is also a badass who frequently punches aliens in the face. He gets some kind of a twisted sexual high off punching them, and is physically unable to stop. Rumor has it he was born and raised in West Philidelphia and spent most of his days on the playground, shooting some meat ball outside of the school.

The critical acclaim for Independence Day was decidedly negative. Many critics felt that the movie "just wasn't that good.", was overly patriotic, or was too much like a bad rip off of H.G. Wells' "War of the Worlds." As always, however, there were a few that enjoyed the film. One of these such critics called the movie "the best War of the Worlds since War of the Worlds. And not the crappy one with Tom Cruise, either. The good one." Still, reviews like this were few and far between, and the negativity of them discouraged many moviegoers. In all, critics who disliked the movie are as unAmerican as flag-burning terrorists, and I hope they burn in hell!

In all, Independence Day was not just a movie. Not just an hour-and-a-half of entertainment that you go to the theater and see 'cause you've nothing better to do. Not just another crap DVD you find in the bargain bin for 4 bucks. Not just some movie whose name you couldn't quite remember that you saw part of on TV that one time. No. This movie changed lives. Perhaps, after watching it, you started to think, just a little more, about what you would do in that situation. Maybe you started to ask yourself, "if there was an alien invasion, would I be ready?" And maybe that's something we all need to start asking ourselves. Because the aliens could come any day now. Thanks to this movie, battle plans are being developed in the event of "force-fields". Thanks to this movie, we may live to see another Independence Day.