Lord of the Flies

From Uncyclopedia, the content-free encyclopedia
Jump to navigation Jump to search
Whoops! Maybe you were looking for Lord of the Rings?

“It's about a really big fly that all the other flies pray to.”

“My favorite part is when the first kid gets voted off the island.”

~ School kid's answer on the test

“I'm not even in the book! Nor do I exist at all! And why am I behind this fat kid? This never even happens. Who designed this cover? They probably didn't even read the book.”

“The plot freaked me out a bit, but it had naked boys.”
~ Oscar Wilde on Lord of the Flies 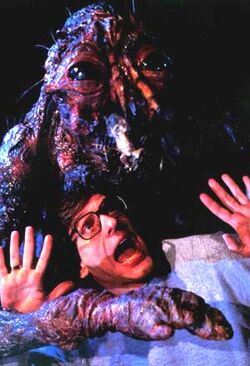 The Lord of the Flies, by post-War author R. M. Ballantyne, is a beloved piece of classic children's literature about the inherently civilized nature of British school children. It tells the story of Ralph, Jack, Simon and Piggy, which is a triumphant illustration of the moral superiority of the white man. Stranded on an uninhabited island, the boys flawlessly recreate British society where previously there was no civilization, demonstrating the virtues of Western colonialism in microcosm. The book is widely seen as arguing against the idea of original sin.

Because the author believed that civilization is a dynamic and balanced institution, each of the characters in the book represents a particular facet of modern society:

The book begins when a group of young boys becomes stranded on a Coral Island after fleeing some sort of war, which was probably started by ungrateful brown-skinned people in the colonies — the dark skin indicates their sinful nature, you know. The boys are then gathered together out of their primordial state of nature by the blowing of a conch shell by Ralph. 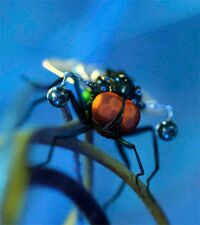 Lord of the Flies

The boys then decide to give up their condition of nature rights and form a State — they write a constitution in the only available medium, the beach sand. (Later the boys find that the constitution has washed away and they become involved in a dispute over whether Jack can legally imprison one of the other boys without due process if he does so on his base at Castle Rock, which is not technically on the soil of the main island.)

Following the drafting of the constitution, the boys decide to become civilized — because they miss tea time terribly — and they proceed to orderly progress through the various stages of social development that every civilization must go through in order to reach its pinnacle — which of course is Britain. First they invent agriculture, then the plow.

Next, they choose a king, and then slowly remove power from him through a series of agreements, until finally they are left with a democratic, constitutional monarchy in which the king's only power is to act foolishly for the tabloids.

The boys follow a similar progression with regard to religion: first, they look up to the sky, they wonder where they come from, and then they begin to worship the stars. Next, they abandon human sacrifice, and begin to worship only one God — the deity that their epileptic friend talks about. Finally, they destroy religion, killing the character of Simon, who represents religion.

As a final step toward civilization, the boys create shelter out of the local materials, after which they decorate their dwellings with things that vaguely look like they came from a jungle, but which the props department probably had to spend a lot of time on, even using modern technology.

Once the boys have created civilization, conflict begins to arise. Jack is charged with tending the signal fire that the boys hope will get them rescued by one of the passing military vessels engaged in the war going on outside the island. When a ship first approaches, the boys on the beach believe they will be rescued and are overjoyed, but the ship passes and it turns out that the signal fire was not kept alight.

When Ralph investigates, he finds that even though Jack was supposed to be tending the fire, he had gone off to make spears. Jack explains that he thought the ship was an enemy ship and so made spears to attack it first instead of lighting the fire. When Ralph tells him the ship was not an enemy ship, Jack first denies it and then says that he received misleading intelligence from Piggy about the nature of the ship. One of Jack's former underlings disputes this report, however, saying that Jack had wanted to attack the ship from day one. Things only become more complicated when Roger says that he voted for lighting the signal fire before he voted against it.

Conflict continues once Jack and his friends catch a pig and cook it. One of the boys, Karl, says that Jack should share the meat with all, giving to his ability while others take to their need. Jack refuses, claiming that Karl is trying to handicap the island's most productive citizen. In response several of Karl's younger followers claim that the pig has feelings too and so shouldn't be eaten, while others argue that the limited supply of pigs on the island means that they must preserve their natural resources by avoiding meat and consuming as little as possible.

After their feasting, the boys then post the head of the pig on a stake in the ground in order to ward off the "beastie," which is said to be hiding in the caves on the other side of the island, and which wants to destroy the conch. Evidently the pig's head wards off this terror because the beasties cannot eat pork.

The final conflict comes when Piggy's glasses are broken by Jack, who decides that Piggy's technological advances are bringing moral decay to the island. He rejects the glasses, which had been used to start fires, and instead advocates the theory of Intelligent Combustion, which states that God causes things to burn of His Own Will. To assert their moral superiority, Jack and his followers then kill Piggy and isolate themselves on Castle Rock while burning the rest of the island. 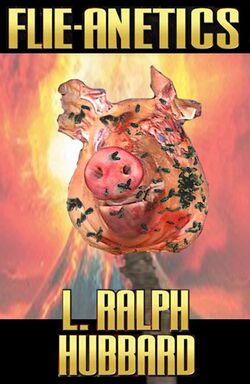 The book's sequel Flie-anetics explains the dangers of modern psychiatry.

Depressed that everyone else has left him to join Jack, Ralph wanders the island in a state of misery until he happens upon the pig's head, which is now covered in flies. This character is the Lord of the Flies, to which the book's title alludes; he is also known as Beelzebub.

The Lord of the Flies then speaks to Ralph's unconscious mind, explaining to him that the pig's head represents Ralph's soul, and that the flies covering the pig's head represent the Thetans which cling to Ralph's soul. Beelzebub explains to Ralph that these thetans are what cause all of Ralph's depression and anxiety, as well as his physical weaknesses. Finally rid of the foolishness of modern psychology, Ralph is able to cleanse himself of all these thetans with the help of the Lord of the Flies.

Freed from his thetans, Ralph gains superpowers which allow him to harness the power of all the local insects to pick up all the boys on the island and fly them back to Britain. It is kind of icky having that many flies pulling you over the ocean, but it saves all of the boys, delivering them back home. As a result of his achievement, Ralph, too, can be seen as a "Lord of the Flies."

Once back in England, the boys all reminisce about their fun adventures on the island over tea and biscuits, while Ralph donates all his money to the Church of Scientology.

The book has many themes, which include:

For those without comedic tastes, the so-called experts at Wikipedia have an article very remotely related to Lord of the Flies.