From Uncyclopedia, the content-free encyclopedia
(Redirected from Spoilers)
Jump to navigation Jump to search

A spoiler tells you what happens in the TV episode you were going to watch in three hours.

It is almost impossible to live a spoiler-free life, but there are some tricks you might want to use. That way, when you are old and weak, lying on your bed, being almost dead, your last words may be: "At least I tried." The only way to ignore spoilers completely is to cover your ears and keep your eyes closed all the time.

If you ever see this warning, start screaming, turn around and run away immediately. Otherwise you will feel worse than Arya Stark did after her parents were murdered.

Avoid every website you can find online, if you don't want to know who is able to see dead people or who killed Dumbledore.

News Networks, like CNN often like to spoil you the election results. Studies have shown that politics are a lot more interesting if you don't know who is the president of the united states until you started to choke at one of his rallies.

The international institute for statistics has found in one of their recent studies that there is a correlation in being uninformed and happiness. Out of the 5000 American citizens they asked, the half claiming Bernie Sanders was president ranked their happiness over four points higher on a scale from one to seventeen. 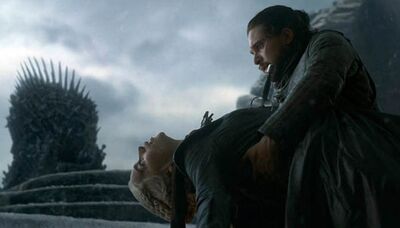 Watching an episode of Game of Thrones might tell you about Joffrey's death or Jon Snow's resurrection, so you will not be able to find out for yourself. And if you want to save yourself from eight years of fruitless watching this fantasy epic, Jon killed Dany. Ice beats Fire.

It can be a lot of fun to spoil your friend's favorite TV shows and books. That way you can easily distinguish a real friendship from a fake one. Spoiling someone can be especially useful as a trump card in a fight. If there is someone pointing a gun at you, promise this person that with your last words, you will scream that Luke Skywalker died in Star Wars Episode VIII: The Last Jedi.

Warning: This technique only works with a Star Wars fan! If your adversary is a Trekkie, this might already have settled your fate.

In recent times, Marvel films are all the rage. Marvel stans on Twitter especially get pissed when someone who has watched the latest one spoils the plot in a tweet. The best spoilers are done on opening night, such as when those that saw Spider-Man: No Way Home leaked photos of Tobey Maguire and Andrew Garfield on-screen alongside Tom Holland. Or Doctor Strange and the Multiverse of Madness when early movie goers spoiled Jim Halpert as Mr Fantastic of the Fantastic Four. But then again, Marvel themselves spoiled a major cameo by having Sir Patrick Stewart's Professor X in the trailer.

If these Marvel movie lovers don't want to be spoiled, they should just watch the movie before returning to the internet. Yet again, they will always be spoiled because mummy and daddy never say "no" — and because spoiling superhero flicks is funny.