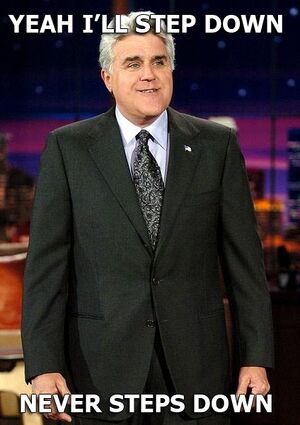 The similarities between Leno and Gaddafi are striking.

“I think Jay Leno should be forced to tell a ton of Tom Cruise jokes about getting in bed with giant lobsters. What do you think, Bill Hicks?”

Jay Leno[1] (born April 28, 1950) is a second-rate American stand-up comedian who stole the hosting job of The Tonight Show from David Letterman, even after Johnny Carson and NBC agreed years in advance that Letterman would take over the Tonight Show mantle. Due to Leno's quick thinking, clever maneuvering, and with the help of Helen Kushnick (one of the most notorious show business agent/producers in Hollywood history) Leno became the King of Late Night.

In late 2009, Leno screwed over his own family relative (Conan O'Brien from Late Night with Conan O'Brien) by luring him to Los Angeles to take over the Tonight Show spot while Leno worked his prime-time show; for some strange, eerie reason that resembles the JFK conspiracy, NBC fired O'Brien and put Leno back as The Tonight Show host within days.[2]

Leno is now the "once leering late-night leader of talk show hosts", renowned for his ability to giggle and sneer at the same time and for telling the longest Clinton joke in history has, coincidentally, become historical fodder.[3]

It is argued that his greatest achievement in show business is being NBC Universal's Biggest Fucking Kiss ass. Leno tells the same Clinton joke to an enthusiastic audience of Hollywood tourists for twenty years, his Schwarzenegger impressions grow more tiresome with age, and his entourage of eccentric noobs (Tom Green, Ross "The Intern" Matthews, Gilbert Gottfried) are nothing more than distractions back to the days of burlesque. He is also a burglar of comedy material (i.e. The Howard Stern Show) that rivals the hit-and-run death squads of crime lord Denis Leary.[4]

The result of Jay Leno as your Late Night host[edit] 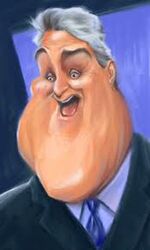 An accurate artistic depiction of Leno

After a few months, panicking NBC executives realized that by putting a middle-aged guy into the traditional realm of gray-haired geezers, they had not only fubared NBC late night for all time, but TV in general, and given people a reason to go to bed at night instead of snacking past their bedtime and performing poorly at work the next day. Although the the late night show has for years attracted approx. half the population of Cleveland, Ohio, the reckless decisions of NBC has reduced the viewing audience to the size of Delaware.[5]

NBC also failed to realize that most people awoke around 6:30 am because they have jobs, for the most part. So who are these laze-abouts[6] watching comedy shows late into the evening hours? LOSERS.[7] People who can't work because of their drug/alcohol addiction. By 11:00 pm, everything is hilarious, even Jay Leno. By 11:15, his retarded guests are even marginally funny. Just kidding. What a bunch of nervous nellies. Although alcohol can increase humor, it also creates embarrassingly silly admissions/reminisces from the unfortunate guests. Like that one time at band camp ... (insert all Leno guests here).[8]

Most so-called bands choose to debut their worst song EVER on the late night venue. The reason for this can be explained by the simple explanation that "who fucking cares?" No one is listening because they fell asleep during the movie promo section and/or never heard of these retarded bands and turn off the TV to save on their electric bill.

Of course it is! Why else did Conan do flashlight under the chin impressions for years before The Tonight Show? Because he knew if Jay Leno put a flashlight under his chin and sang "In the Year 3000", the audience would run screaming out of the building, trampling each other, and cause a massive panic the likes of which haven't been seen since King Kong. The phenomenal trapezoid effect is scary because the longer the chin, the more massive the forehead when under-lighted.[9]

Just close your eyes and imagine Leno, Frankenstein or Herman Munster,[10] shining flashlights under their chins. Very scary and enough to call in the US military. NBC couldn't afford to allow such negative publicity, therefore Leno's chin was insured for $500,000 including a no flashlight clause. If anyone shoots Leno's chin with an arrow, NBC will benefit from the insurance policy and possibly save the network.

Recent evidence and photos have shown that Jay Leno is, in fact, an alien. Leno's chin however, was a dead give away to obsessive alien stalkers like Michael J. Fox.

It is a well known fact that Jay Leno and Bruce Campbell are bitter enemies, often arguing about who has the better chin. This argument reached a climax in what is now known as the Chin Wars. Leno is thought to have lost this battle, but anyone who even hints that he did, is crushed by Leno's massive chin of death.

Leno makes a whole shitload of money, most of which he gives away to deserving, underprivileged people like Bill Gates, Donald Trump and Oprah. He also has a large collection of cars, in which he likes to drive around Los Angeles and run over sorry-ass restaurant waiters who think they're going to be the next Tom Cruise. You might think this is mean-spirited, but it's not. He's actually sparing them a lifetime of rejection and misery by running them over, so "it's charity, motherfucker!"[11]

Soon after news of President Clinton's sex scandal emerged in the mainstream media, Leno found his calling. Every day since, he has told the infamous "Clinton Joke" to an enthusiastic audience. He is hailed as the inventor of the Clinton Joke, and has honed it throughout the years with each telling. Years after Clinton's term ended, Leno continued well into the next presidency, adapting current events to fit into a Clinton joke at least twice in one night. He was awarded the honorary Comedy Central "Comedic Achievement for Most Clinton Jokes in One Lifetime Award" in 2008.

Since then, Leno has retired to a humble village with his wife and airplane hangar of 1000+ cars, vowing never to appear on television again. He still tells his famed Clinton jokes to the locals, as well as his children and grandchildren, who will remember them for years to come.

Jay Leno's habit of lapsing into nonsensical Arnold Schwarzenegger voice-overs like a Tourette's Syndrome victim were cited as the reason for his replacement of the Tonight Show host by Conan O'Brien in 2009. Critics have likened the impersonation to that of a drunken retarded walrus, or possibly a Bulgarian moose during mating season. Cable companies claim that within 5 seconds of these horrific imitations, 95% of the viewers flip the channel to Letterman, or even better, Space Ghost. 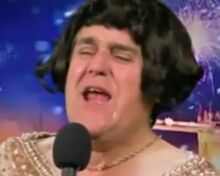 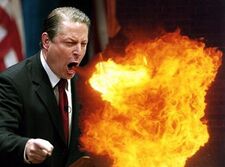