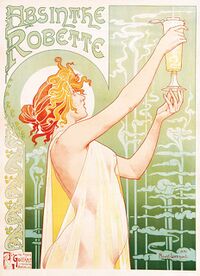 Absinthe is a green liquid often used to circumvent most methods of birth control. It functions as a truth serum and occasionally disturbs the Space Time Continuum. It is outlawed in several countries because frequent use may result in felony charges of "acting like an idiot." Absinthe is also the fuel of choice for rockets and Formula 1 cars. 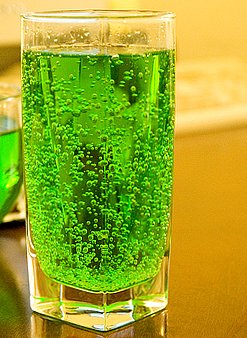 A glass of liquid kryptonite.

Absinthe is distilled from bits of wood, worms, green crayons, plutonium, and 11 secret herbs and spices. One of these flavor-noids is green kryptonite. Consumption of absinthe by Kryptonians causes them to wear their underpants on the outside, become attracted to large phallic objects such as aeroplanes and supertankers, often rescuing them without warning and taking them back to their Fortress of "Solitude", and then having no recollection of the past 14 hours or why they have large quantities of crude oil and aviation fuel lodged in their Spandex.

Absinthe has been used in Bohemian rituals for centuries to convince others that they are more hedonistic and Bohemian than anyone else. It is passé to simply pour absinthe directly from the bottle into a glass. In order to experience the full effects, both from the ingredients and on the faces of one's cohorts, absinthe should be decanted through a sugar cube, ideally one 15 inches across. Burnt toast, an old sock, or any Edwardian writer can be substituted for the sugar cube. Adherents are hindered by the fact that sugar cubes anywhere near the ideal size purchased at the local Agway are usually salt.

For those without comedic tastes, the so-called experts at Wikipedia have an article about Absinthe.

Astonishing side effects have been attributed to the consumption of absinthe, and given its effects on memory, surely there are twice as many unattributed ones. Absinthe causes fantasies about Green Fairies, passing out, and forgetting about having sex with your sister's goat. Poetry and big shirts with frilly collars are also common side effects, especially following a binge with Lord Byron and Percy Shelley.