“Roses are red,
violets are too.
In Soviet Russia,
poem writes YOU!” 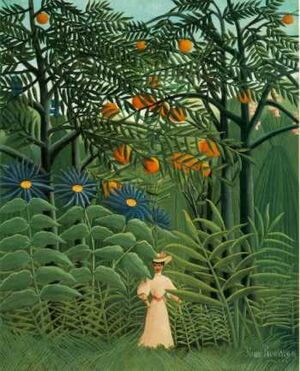 The wily and elusive poet in her natural environment.

Poetry is the art of writing incoherent phrases to suggest mystery and generally confuse people. It does this through diction, caesura, figurative language, and large amounts of illegal drugs. Unlike writing prose or anything else, writing poetry does not include forethought or revision. Poetry is often written with the intention of attracting girls.

Some notable poets are William Shakespeare (recently confirmed to have truly been a woman), Robert Frost, Homer, Oscar Wilde, John Milton, Lord Byron, Henswick Wallenfraüde, John Keats and the Pam Ayres. Livejournals and have become the mecca for contemporary poetry. Anything written about poetry is purely speculative since nobody ever reads it.

The origins of poetry are uncertain. The most likely origin is word-of-mouth oratory and song-speech. Storytelling was often made more interesting through things such as rhyme scheme and rhythm.

The emergence and growing popularity of heavy metal and grindcore music in Egypt paved the way for the first documented poetry. Many Egyptian slave laborers wrote these first poetic prototypes in between the daily activities of carrying stones and carrying heavier stones. They were often written into sand, and later, a more lasting medium, clay tablets. Few remaining clay tablets of Egyptian poetry exist, since the Egyptian overlords often confiscated any they found and destroyed them. A virulent and hilarious beating usually followed.

Strange though it may seem, foreigners participate in poetry too. Beautiful French, Spanish, Chinese and yes, even German poetry has been recorded throughout the ages. Take this 19th Century Lament for a requiem by Georg Vilhelm Friedrich Hegel.

The part about his dying grandmother and house burning down are exceptionally funny and warming to the soul. 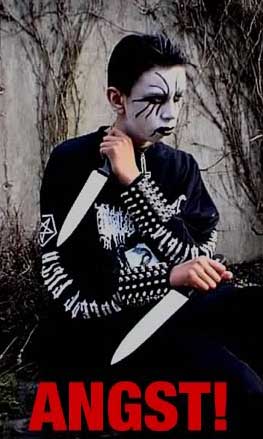 Angst, one of the more common emotions of poetic verses.

Modern poetry is the poetry of our age. Much of it is unoriginal, generic, and easy to spot. It often consists of archaic language, very basic format, and often times a childish tone and message. A poem about a laptop or an iPod is likely to be modern poetry.

Generic poetry is perhaps one of the most common forms of modern poetry. Much of it consists of individuals with nothing to say wanting to seem like they’re saying something. It is also what happens when people learn big words, and want to show them off in a "sensitive" and "thoughtful" way. "Oh, oh, look at me! I have emotions! I want to comment on the world around me in order to change it! I think that the best way to do this is in the way that nobody can understand!"

Now to turn it into a poem.

Stupid poetry is not completely without point or logic, however. According to Frederico Lorca in Survival of the Dimmest, writing smart poetry carries great risk of death by lacerations, ingestion, poison, and concussions:

"But intelligence is often the enemy of poetry, because it limits too much, and it elevates the poet to a sharp-edged throne where he forgets that ants could eat him or that a great arsenic lobster could fall suddenly on his head."

Stream of consciousness is an extreme form of stupid poetry which attempts to follow the normal flow of human thought. It fails miserably; if people really thought as some of this type of poetry suggest, we would have probably been eaten to extinction by sabre-toothed tigers. It is mostly created by lazy people, and those just trying to be weird.

Poetry addressed at Newfoundlanders is renowned for it hilariousness and wit. Below is a poem by B.F. Gardner, a classic example: 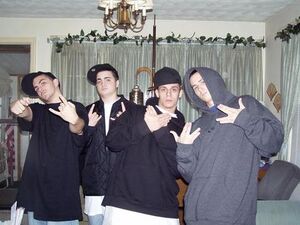 Rap, otherwise known as "fast poetry uttered by gangstas", is the contemporary form of poetic expression. It is often spoken in a nonsensical dialect known as ebonics. Common themes in rap include bitches and hoes, wearing flashy and heavy jewelry, expensive cars, having to pay child support, and the typical thug life in the ghetto streets that the rapper no longer lives in because he resides in a mansion that his record company owns.

Rappers often adopt nome-de-plumes such as 50 Cent, Lil Wayne, or DMX because of the unappealing nature of their real names. Most rappers' real names are very casual and pleasant, such as Curtis, Dwayne, Earl, and Leroy.

Criticisms of rap music often label it as violent, misogynistic, and nonsensical. Others have defended rap music, and have argued that while it is violent and misogynistic, it is not nonsensical. They claim it to be the expression of the oppressed black man. In refutation, it has been argued that Jewish rap is far more pleasant.

Despite being the newest form of poetry, rappers often cite very prominent poets in history as their influences. Rapper Snoop Dogg cites Christopher Marlowe, Henry Wadsworth Longfellow, and E.E. Cummings as his primary influences. In addition, his favorite piece of literature is Beowulf, particularly where, "He rips off Grendel's arm n' shit."

Below is an example of rap ("Weezy Baby" by Lil Wayne) with its adjacent translation.

Poetry takes on an entirely new face when one is under the influence of mind-altering substances. Much rap is of this.

Do not, under any circumstances, attempt to understand a poem. It is too difficult. You are likely to hurt yourself. This is not your fault. It is the poet's. Sir Edmund Spenser's epic The Faerie Queene was, contrary to popular belief, not about Queen Elizabeth I, but was in fact a detailed poetic review of his favorite Subway restaurant. Such confusion is the result of poetry's inability to keep it simple.

What is poetry for? 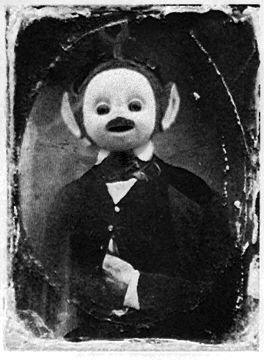 The poet, obviously! You didn't think it was for your enjoyment, did you?

Here follows a list of common reasons to write poetry:


used in this society.