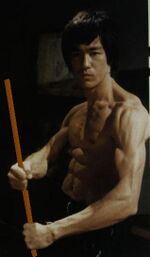 For those without comedic tastes, the "questionable parody" of this website called Wikipedia have an article very remotely related to Bruce Lee.

Bruce Lee (born Lee Jun-fan; 27 November 1940 – 20 July 1973) was the deadliest kung-fu fighter that ever roamed the world, whose power surpassed even that of Chuck Norris. He starred in a number of kung-fu movies in the '70s, which made millions of dollars despite how corny and laughable they were.

Bruce Lee was not born. He forced God to make him. Bruce Lee created a revolutionary weapon known to many as "Chuck Norris" while at the same time a man known as Buddha was spawned in the deep, dark pits of the Red Sea. It was said that when Chuck Norris and Buddha collide Bruce Lee will emerge. Bruce Lee can not die. Bruce Lee is more powerful than any god... or he would be if he wasn't six feet under.

Bruce Lee created the universe, comprising the persons of The Father, the Son, and the Holy Spirit, all in one being. In addition, Bruce Lee is also identical to the millions of gods of Hinduism and any other religion that has ever existed over the course of human history. However, this does not mean that those gods do not exist. The simple fact that those religion still thrives today rests on the easy-going and friendly personality of Bruce Lee, due to the fact that his secretaries always bring him coffee every morning so that he can kick ass and never fall asleep. His humble attitude has led him to believe that the many gods of the earth are quite knowledgeable and entertaining to keep around. Their favorite past-time activities include Chinese checkers, PS3, and intense baby-making sessions with incredibly attractive females... often, these three are done all at the same time.

Bruce Lee is often refereed to as "Hidden Tiger," "Crouching Dragon," and of course, "Kicking Ass."

Bruce Lee torture houseflies and bees as a kid. With his chopsticks, he would pull their wings off one by one as they flew, and the flies would eventually die of exhaustion because they couldn't fly. Eventually, Bruce Lee realized the cruelty of his actions by imagining himself as one of those flies and as a result he almost died. By following the Confucian teaching of "don't do anything to others what they don't want done to him", he devoted himself to a lifetime of service to justice and unbelievable sex (crouching tiger, hidden-dragon style). He also learned to appreciate the joys of smoking marijuana as taught to him by babysitter W.C. Fields.

Bruce Lee was a pineapple in his previous life. To repent for the wrong he did in his previous life, he fought every man in the solar system. This is currently a hotly-debated issue in numerous academic universities and scientific laboratories world-wide. Scholars are baffled and amazed at Bruce Lee's ability to do damage even when he is trapped inside a fruit, such as a pineapple. Needless to say, the pineapple is one of his least favorite foods, due to his overconsumption of the fruit - after a lifetime of eating pineapple fruit he went beyond insane, telekinetically ripping out opponents' skulls and drinking their spinal fluid to gain strength and momentary peace of mind.

Spongebob Squarepants has been rumored to have started a campaign against Lee for the brutal treatment of housing (pineapples). However, it is a fact that Lee does not give a shit about a sponge in the sea, or his entourage of equally mutated creatures. If provoked, Lee could cause an underground tsunami to wipe out Bikini Bottom and effectively end the ridiculous lives of the freaks who live there.

The Legend of the Little Dragon[edit]

Many people throughout Middle Earth, Asia, Mecca, and Narnia believed that Bruce Lee was to be known as the little dragon. However research from an old master who taught Bruce in his youth known as "Yip Man" or sometimes "Master Rochi" told the world the legend of how Bruce saved the world from an intergalactic threat that went by the name of "Majin Buu." As much as it seemed at the time that Bruce was winning, Majin Buu caught Bruce off guard whilst he was tending to a wounded Jackie Chan and Jet Li who had been almost completely decimated by the creatures evil attacks. Though Bruce thought Buu was dead after a 21,000 hit combo from Bruce's magical pair of crystal amethyst nunchaku, Buu simply reformed his head and attacked Bruce from behind, causing a small cut that ran from approximately half a centimeter below his right eye to an inch northwest of his right nostril.

Bruce merely ran his left thumb across the wound before licking the drop of blood on his finger to confirm he was actually bleeding (and because it is a very badass thing to do) before transforming into what Yip Man described as a Super Saiyan. Bruce's hair turned gold with rage and his eyes turned silver causing Majin Buu's eyes to bleed. At this time Bruce called upon his pet, a 12 mile long dragon that he trapped within seven golden balls all buried miles underneath the great wall of China. His pet appeared and stuck an amazingly golden pose behind him, thus gaining him the title "Little Dragon." Bruce muttered the first words that come to mind out of anger which happened to be, "KA-ME-HA-ME-HA!" The technique he killed the dinosaurs with almost two Billion years earlier.

With the legend of Bruce being known as the little dragon, his pet got no recognition for the fight. The dragon went on a mad rampage when asked what it was like to be a "Side Kick" to an immortal legend who even a twelve mile long fire breathing dragon could not comprehend. Bruce for this reason buried it under the great wall of China were it sleeps today, going by the name of "Bitch." Techno band "The Prodigy" wrote a song about the time they saw Bruce training with the creature in Guantanamo Bay with his two Asian friends Harold and Kumar. A year later they reached number one with "Smack my Bitch Up." In Bruce's absence Jackie Chan and Big Boss have taken it upon themselves to feed the creature, when summoned from underneath the great wall of China, Big Boss beats the dragon down with Chan's help, Big Boss then pins the creature down as Jackie force feeds the animal its greens and Asian chicks. This task has become very strenuous since Steve Irwin, Bruce Lee's best Zoologist died feeding Bruce's manta ray.

His Legendary Feats and Abilities[edit]

Bruce Lee's punches were so fast that they moved at more than ten times the speed of light and thus traveled into the future and landed on his own body moments later, after he'd stepped forward. This is what really killed him - the only thing powerful enough: his own fists. Although you must keep in mind that Bruce Lee never died, he only chose to stop his presence on earth because it became boring after a while. It has also been determined that Bruce Lee's contained all the strength and power of His Holiness, the Dalai Lama's in the pinky of his right hand.

Foot size varies from stabbing pin size anything up to tractor size - special expandable footwear helped him get a shoe in to the film industry.

No other mortal, earthly human male has come close to matching Bruce Lee's capabilities. Nobody has ever managed to defeat him, not even Chuck Norris (They did fight once; Bruce Lee smacked him with a back fist so hard, Chuck Norris flew into India, causing it to collide with the Asian continent, giving rise to the Himalayan mountains. It is a testament to Chuck's tremendous fortitude that he survived at all.) Despite popular opinion, scientific studies have proven over and over that Bruce Lee can vaporize Jean Claude Van Damme, Arnold Schwarzenegger, Dolph, Batman, Sylvester Stallone, Denica Fairman, WordGirl, Superman, Paris Hilton, Big Boss, Vin Diesel, Aaron and [insert names of every other male who ever lived on earth in here] in one Red Tiger Judo Side-Chop all at the same time while engaging in fierce sexual intercourse with several beautiful women... from his own bedroom in Hong Kong while watching ESPN Classic. For this reason, he has come to be known as "The Mad Turk". 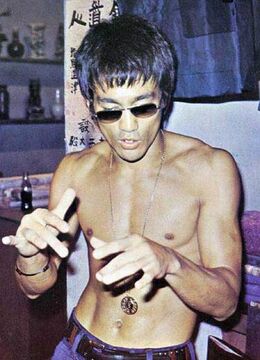 Bruce Lee using the chi to give a woman, 1,200 miles away from his location, an orgasm.

The only way Bruce could get to sleep was to stare at himself flexing and dancing in a mirror and try and frighten himself into a faint. Mostly though, he had to take a dump and then he fell asleep at the bathroom.

Another Shaolin technique developed by Bruce was his famous "heat endurance". Having mastered the art of walking on white-hot coals while still in the womb, Bruce used to hitch a ride on any space vehicle (Why the fuck he would actually need to hitch a ride on a space vehicle no one knows) - but on the outside. His zen mastery prevented him from burning up on re-entry into the earth's atmosphere. The oxygen-free atmosphere of space was no problem for Bruce, either - he breathed no more than ten times throughout his life, believing it to be wasteful. Again, he did not want to take away from the precious time of Chinese checkers and mildly okay sex.

Bruce had such absolutely perfect muscle control that he could shake hands with one person, while ripping off the hand of another person - not even in the same room. In addition he is able to make any woman orgasm continuously for an indefinite amount of time just by simply touching them with one finger, at any location on their body. Such ability has led the male population to unanimously award Bruce Lee's girlfriend the Luckiest Woman in the Universe title... just imagine what he could do with his other finger... It has been boasted that he was so powerful and influential that Arnold Schwarzenegger has no problem being satisfied even after his physical, earthly death, it is rumored that she still has orgasms from when they first made love, and that Bruce Lee loved her so much that he gave her the ability to induce orgasm at any intensity whenever she wishes, thus she would remain loyal to him only.

Bruce Lee died July 20, 1973 and is buried in Seattle. At least that's what he wants you to think. Bruce tricked the cerebral edema that was trying to kill him into believing that it had succeeded. When the edema let down its guard, Bruce sprung back to life and the last thing it saw was a flash of yellow from Bruce's sexy yellow and black jumpsuit he had been wearing. Needless to say it isn't Bruce Lee buried in that Seattle cemetery plot. He's actually right behind you, but don't bother looking, for he will either hide from your sight by doing whatever he wants because he can, or simply breathe on you and you fly through your computer in a pile of unrecognizable human parts.

Except he won't because he's dead. The Chinese mafia killed him via food poisoning. It was a great and noble battle, but in the end, he lost (or so he wants you to think). He managed to defeat the aspirin before he "died", by using a hadoken with 10 levels of yellow magic.