From Uncyclopedia, the content-free encyclopedia
(Redirected from Orgasm)
Jump to navigation Jump to search 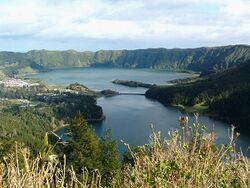 Orgasm Island (AKA The Isle of Good Feelings, AKA Fap Island) is a popular vacation spot off the coast of Pen Island. It is a former British Crown Colony that got it's independence after World War II when it was captured by the Japanese Empire and America, respectively. It is most famous for it's tourist spots, such as the capital city, Cummington, it's magnificent Fappen Lake (pictured), and a strange air of euphoria that seems to surround the island itself.

Origin of the Name[edit]

By all accounts, he and the rest of his crew had an orgasm upon setting foot on the island, hence them naming it "Orgasm Island."

Not much is known about pre-British Orgasm Island, but it is generally agreed upon that the natives migrated from nearby Pen Island. Early accounts by the Chinese stated that the native Orgasmians were "always eerily happy" and "had their faces contorted in the strangest of ways at all times." Other sources come from various people such as native Filipinos and Japanese. These have yet to be discovered, though. 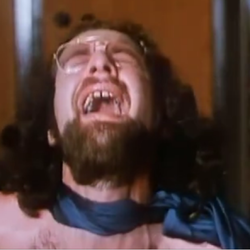 Almost every male you encounter on the island has their face stuck in this position.

Orgasm Island was discovered in 1732 by the Spanish, who were too busy colonizing the Philippines to do anything but give the island a name: La Colonia Real del Magnífico Imperio de España: Santiago de las Filipinas cerca de Isla de Pluma y la Isla de Orgasmo[1]. Which, according to my Spanish-English dictionary, means "suck mah dick hel yah." Huh. Those frisky Spaniards...

The first European to set foot on the island was Sir Benjamin Cummington, a British explorer who claimed the island for Britain in 1762. He successfully subdued the natives and formed the city of Cummington; named after himself. Occasionally, there were a few revolts against British colonization, but they usually subsided when they forgot what they were revolting against.

A typical Orgasmian woman after the Japanese takeover.

Nude beaches are an important part of Orgasmian culture.

The Orgasmian culture has not changed much since ancient times, but today it is threatened by the dominating Japanese and British cultures. You just can't go anywhere without seeing the native women being replaced by anime girls and guys with hot British accents enforcing the British stereotype. However, many maintain their culture in spite of the oppressants, and it is still evident in Orgasm Island today. For example, all beaches on the island are nude beaches. This is because, in Orgasmian folklore, wearing clothes when swimming will cause you to get mauled by a shark. Don't ask how you can get mauled by a shark.

Nude beaches aren't the only aspect of Orgasmian culture, though. Another quirky fact about them is that they never wear any clothes, ever. This is because they found out very long ago that if they wear clothes, they will only get wet. The native tribes have never been at war with each other, either. The most widely accepted theory as to why this is is that they are too busy having frequent orgasms to care about who controls what.

Orgasm Island is a famous tourist spot in the Pacific Ocean. It's main attractions are the Cummington, the capital city, and Fappen Lake, the island's foremost natural landmark. Some crude, immature people say that people go to Fappen Lake to fap, but that is just stupid. There is no relation between Fappen Lake and "fap."

Cummington is famous for being the only city in the world that is half Red-Light District and half Downtown Vegas.

Cummington is also famous for having a red-light district that covers over half the city, and the rest of it is basically downtown Las Vegas. The city is a very popular tourist destination among young, single men 17-35, according to a popular British newspaper. In fact, it is rumored that Cummington has more hookers in it than Amsterdam, but our sources have yet to confirm this, as no one has ever come back from the island.

Fappen Lake is said to be the greatest sight to see in all of Orgasm Island. Many a young couple have gone there over the years to enjoy the sights, and have "romantic periods" with each other. It is named after Friedrich von Fappen, Sir Cummington's German slave at the time. According to legend, when they saw the lake, it was so beautiful that Sir Cummington freed Fappen from slavery and proceeded to name the falls after his former slave. (Or they just fapped)