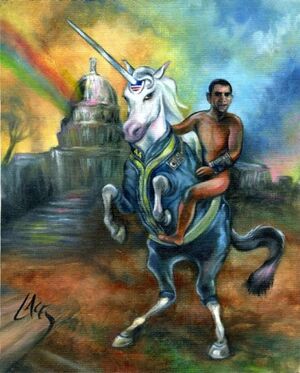 Obama held this pose for seven hours, until the unicorn passed out from exhaustion.

“I'm always naked when I think about Ugandan children”

Approximately 3.8 billion years ago, the first form of life evolved. While the details are still a mystery, most scientists believe this life lived in water, and that it did not wear a swimsuit, hence making it the very first skinny-dipper. For eons, life lived exclusively under water; skinny-dipping popularity was at an all-time high. Then, according to Wikipedia's article on geological time scales, plants and fungi first appeared on land during the Ordovician era, making them the first organisms not to skinny-dip (although they were still naked.) About 400 million years or so later, human beings invented clothing, making them the first creatures to enter the water while not skinny-dipping.

"When God created the first man Adam and his wife Eve, textiles were not yet invented. Of course the Lord could have invented them himself, but then he also would have had to make factories. And as any Christian knows Jesus disapproves of condoms and such things as sleeping with your sister, gambling, pornography, bestiality, science, politicians, and anything Islamic. So God let man do it, relaxing in heaven, regarding his creatures with supercilious contempt. Unfortunately, it was not God's will that animals would understand the complex theory behind clothing, and to this day the existence of fully-dressed animal has not been confirmed. Some scientists, trying to prove the contrary, have cited president Bush, but cannot agree whether or not the American President is actually more evolved than a Bonobo, although it has been proven that chimps are capable of doing everything Bush can. Plus and they don't share his penchant for invading small, relatively harmless countries." -Theorist

According to ancient records, nudity was un-invented after the discovery of cold. Soon after came the invention of paint, canvas, and removing clothes. Thus, the nude painting was invented. The majority of nude paintings contain figures who are not smiling. Nude art with smiles were ridiculed for being too personable, enticing, or creepy. No deaths have been caused by nude art to date, however, multiple heart attacks have been reported from older gentlemen. 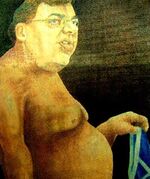 The phrase, The Full Monty was coined after Irish dictator Monty Cowen, a nude art enthusiast. He commissioned nine hundred artists for over fifteen thousand paintings of his naked body. The availability of this artwork so overwhelmingly outweighed the demand that the paintings are currently worthless. Retail establishments are unwilling to carry these original works of art, because the value of the shelf space is greater than the works themselves. The Full Monty has come to mean "The shameless bearing of all, for the benefit of no one than yourself."

Monty Cowen is the first Irishman to get his name in the title of a full-length motion picture to be released in the continental Unites States. 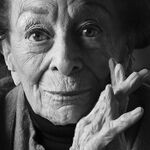 Ruth Burnhard is watching you.

Nude photographs were invented by Ruth Burnhard, a long time nudist and sexual philanthropist. She saw the expressionless face of a naked woman as an object, in the same way people view rump roast.

“To me, they're just a well-done piece of smoking hot ass.”

The industry has boomed in the Los Angeles area, where photographers and filmmakers have dedicated their lives to the pursuit of this art form. Everyday co-eds make the leap into the career.

Digital photography has changed the way in which we understand what is considered nude art. Since the invention of digital media, artists have begun rendering images both with and without models. Though historically, nude art has been about accurate representation, augmentation surgery has broadened the scope of what Americans are willing to consider reasonable proportions.

Laura Croft, the famous British philanthropist and nude model, was the inspiration for Tomb Raider. She helped build the first digitally rendered action hero to appear in the nude, though the catholic church banned the original incarnation of the digital, interactive art. The re-release included the original design as a hidden special feature, and the catholic church's ban helped to bolster sales for the interactive art company.

It is a common misconception that nudists must be 'at it all the time' with everything out on display like a supermarket or church service. Nudists often prefer to have an article of clothing on to keep some of their "mysterious qualities" while out and about in their nude culture. (A popular mystery nudists like to keep to themselves is the size of their earrings.) Wigs, hats, necklaces, aprons, and painted toe nails have become extremely popular in nudist culture for fashion, and practical reasons.

Sports were invented by the Romans as a means of convincing young men and boys to roll on the ground together naked without arousing too many feelings of embarrassment. The crowds of the Colosseum cheered at the finish line to the first nude marathon, and the excitement of the frog jump competition.

Nude sports were rekindled by middle class exhibitionists to help promote the games of bouncing boobs badminton and wobble bottom golf. Especially popular with Germans - nudism has now spread all over the world. Extreme nudists believe in compulsory nakedness and have torched GAP and Wal-Mart stores world wide. Nudists and Communists share a common contempt for Clothing and baked goods.

Emile Heskey is just one soccer player who plays in the nude. This is allowed because his drooping flab protects the audience's sensibilities.

Bear/Bare Naked. Bear/Bare jokes have been around for years so expect plenty more in the future. 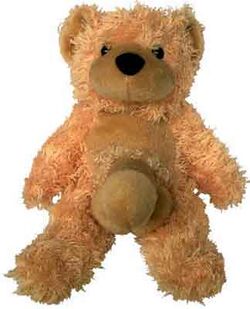 A nude teddy bear or Boner Bear that is definitely not for the kiddies !

Naked facts: Somebody tells the naked facts when he doesn't narrate it with a nice story. For example: a man jumps from a thirteenth floor building and the reporter of a newspaper mentions the fact. This is just boring, right? What the reporter forgets to mention is that the man lands on top of a little doggy on the pavement and that this unfortunate matter happens on the 4th of October, that's right: "animal day"! The story is suddenly a lot more funny, no?

Skinny dipping: Skinny dipping is an international renowned and sponsored sport in Belgium and Holland. In Belgium there are public nude activities, accessible for every member of any club, the local chess club and even the fanclub of the renowned Flemish nude model Veronique de Kock (who is herself a seasoned nudist).

Nude sleeping: Sleeping nude is exactly the same as swimming nude, but usually less wet and taking place mostly in the dark. The known expression, "No, that's not yogurt mummy, I had a wet dream." proves that there is an etymological connection between sleeping nude and skinnydipping. In the old days people tended to sleep in their pyjama's, but nowadays every man and woman with a little self esteem sleeps totally nude. (note: Don't sleep in the nude with your sister because you might feel her up and have sex with her in your sleep. You want to do that while you're awake).

Nude Cosmetics. Apply make up 'Aller nu' as they say in France. Though nude cosmetics are more expensive that simple old mascara which has always been a mystery.

Nude Models. If they are nude they are rude but arty. But if described as naked they could be jaded and bad.