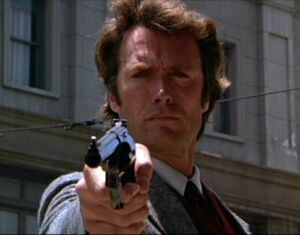 Do you want to sniff my hair punk? Well, do ya?

For those without comedic tastes, the so-called experts at Wikipedia have an article about Dirty Harry.

“ His hair seems a bit unclean.”

“In Soviet Russia, day makes YOU!!”

“Dirty Harry doesn't seem to play by the rules, but he does get results.”

~ the other Callaghan on Harold Callaghan

Dirty Harry is a film series based around a San Francisco Police Detective named Harold Callahan who uses his tremendously filthy hair and a .44 Magnum to fight crime. He was portrayed by Clint Eastwood, who wanted to avoid being typecast as a weak, peace-loving hippie, as he had portrayed in his previous films. When Harry washed his hair at age 20, he had to switch to using guns to kill outlaws for the rest of his life. He uses his Magnum in quick succession at hippies (read as "punks") to paralyze them with an amazing orgasm of taste before actually shooting them. Harry's career is portrayed in five films, telling the story from his introduction to the force and his hunt for the psychopathic Scorpio Killer, all the way to his involvement in a so-called celebrity death list in "The Dead Pool." The following is a summary of his character from the not-at-all-in-depth films.

Harry was an outcast during his teenage years, due to his status as a hall monitor in his high school, "Come Here and Get High (School), Man". Harry was once kissed by a boy when the boy's severed lips touched him on his cheek. He never recovered for four years after this, which was why he only growled at people from then on. When his voice broke, no one had a clue what he was talking about. He was not allowed to use the phone after an incident in which he called to order a pizza. His breathing was so heavy, the guy who answered the phone believed he was a Peeping Tom and reported him to the police. This was when Harry first noticed the police force. They had such long guns and could shoot anyone they wanted in the name of "protecting the peace". He knew it was the perfect job for him and his beautiful head of hair.

Harry immediately joined the San Francisco Police Department at age 18, even though he lived in Mexico at the time. This was because he could knock the psychedelic colored t-shirt off of a hippie with a bullet from 60,000 miles away. However, after Harry faced massive criticism for his bitter and cold handling of the law, he was forced to move to Frisco. Harry was so macho, everyone in San Francisco stopped trying to be more masculine than him, and became gay.

Harry caused a massive amount of homicides in San Francisco due to his inability to tell the difference between criminals and bystanders. No more was said of these events. So bad was the Homicide Crisis of '71, that Harry himself was promoted to homicide detective to solve his own homicides. He held the world record for most civilians killed in a lifetime.

Meanwhile, a psychopathic serial killer and rapist named Hank Scorpio tried to beat Harry's record by shooting lots of random civilians. This infuriated Harry and caused him to track down Scorpio, who left four people dead in his wake. In a last chance effort in walking over the law, Scorpio hijacked a school bus full of children, demanding preparations out of the country, and a ransom of $2,000 grand, with no cops or law enforcement in sight. Unfortunately, he didn't expect Harry, who chased him out of the bus and to the river bank, whereupon Harry finished him off with his Magnum. BAM! Scorpio's dead body fell into the river. Harry was forced to leave the homicide department after his handling of the case.

Harry gets angry when there are no crimes to solve.

In his later days, Harry retired, somehow obtained a rare Gran Torino, developed a deep hatred for "Chinks", and finally got shot by a Vietnamese gang when he wanted to smoke his "final cigarette". Death itself was scared of meeting Harry, so he brought Boron-Carbide body armor, a double-barreled shot gun, and ironically enough, a .357 Magnum. Death was not seen after that incident.

During his career as an inspector, Harry was infamous for his partner's high injury rates. To make things worse, they always were part of minority groups. In his five films, (Dirty Harry, Magnum Force, The Enforcer, Sudden Impact and The Dead Pool), Harry had many partners, most of who were injured or worse. These included (in Harry's own words) a "spick" in Dirty Harry, a "nigger" in Magnum Force, a "dumb broad" in The Enforcer, a "stupid mutt" and another "damn nigger" in Sudden Impact and a "chink" in The Dead Pool. Some questioned why Harry used racist terms for his partners, but Harry just mumbled something about "damn liberals" and started shooting again. Secretly, Harry asked for these members to be his partners and then shoot them, blaming "crossfire". He never stooped to having a hippy partner, though. He only liked the human minority groups. 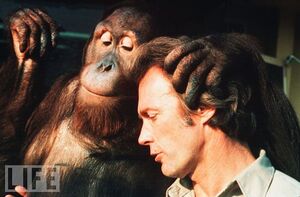 Harry Callahan's Legacy was widespread, spawning many imitations including Die Hard, Beverly Hills Cop, CSI: Miami (Horatio's gravelly voice and homicidal tendencies, along with his stupid name) and Pokémon. Harry's hair went on to star in a film called "Shampoo: What Is It?" on its own, as well as its 7 sequels, with each one of them winning an Oscar for it's main actor, Dirty Hairy. John Travolta also cited "Dirty Harry" as an inspiration for his documentary "Battlefield Earth" which charts what happens when an "unnamed" homicide detective from the 1970s travels to the future to kill Scientology. The Dirty Harry films were noted for their glorification of firearms, corruption, violence, and bestiality.

Clint Eastwood is actually deathly afraid of violence and had to shoot random commies to get accustomed to it, back when method acting was for real men only. He also stopped cutting his hair for six years before the first film. Clint has acknowledged playing a sperm and subsequently a baby in "Harry 1: The Pre-Dirt Years: What's this Fleshy Tube?" to be his least challenging role as he is really small, wrinkly and bald anyway. Clint's Harry films number just five. They are "Dirty Harry", "Magnum Force", "The Enforcer", "Sudden Impact" and "The Dead Pool", ironically the only ones where he had partners which he "accidentally" killed. As a side note, those five were the only of the series ever actually seen, on Clint's demands, even though the combined budgets of the unreleased films come to five trillion dollars, mostly spent on preparing Clint's hair and paying off hippies to allow them to be actually killed in the films. You don't mess with Clint.