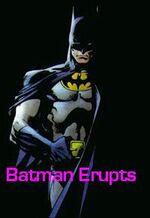 A proposed partial movie poster for the film.

The rumor of Batman Erupts has been present in Hollywood since around the year 2000. Talk circulated about an unfilmed script that had been written entirely by Joel Schumacher and was intended to be the next installment of the Batman series (and much in the same vein as the previous two installments: Batman Forever and Batman & Robin.)

However, it was only recently that an original copy of the proposed script was discovered by an janitor at Warner Brothers in a backroom while having bumfun with his boyfriend. Also, once word leaked of the discovery, other execs at the studio (and Schmacher himself) opened up about the failed project and how it would be set.

The origins of the proposed film date back to just after filming had completed on the picture Batman and Robin. Schumacher, confident that the film would become a massive hit and that another film in the franchise would swiftly be ordered, began running screming in oil. Afterwards, he made a script titled "Batman Erupts."

In Schumacher's own words:

“It has been well-noted that I played up the homosexual angle [of the original television series] to a good degree in the two films I had directed. This time, I wanted to just go all out: complete camp, complete freedom, completely out of the closet. It would be something that would take the Batman character in an entirely new, more sexual direction.”

According to Schumacher, the Batman/Bruce Wayne character would open himself up to the alternative lifestyle as he battled an entirely new (and different) opponent than he had ever faced before. Within a matter of weeks, as he prepared for the opening of the latest film, he completed a script and submitted it to executives at Warner Brothers. The executives said that they would soon look at it and start working with the director soon.

However, the box office decided to alter these plans drastically. Upon realease to theaters, "Batman and Robin" was universally panned by critics, and (despite making $90 million domestically) it lost a good deal of money for the studio. Furthermore, there was considerable backlash from die-hard fans of the characters at small inclusions that Schumacher had put in, such as a batsuit with nipples. Not happy with these turns of events, the Warner executives decided to not pursue another film with Schumacher, but instead of tossing away his script, they simply put it in a storage room in their main headquarters, saying, "If we ever run out of toilet paper, we'll have plenty to go around with this puppy." 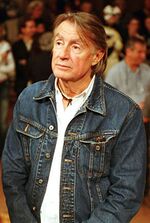 ...complete camp, complete freedom, completely out of the closet.

The script stayed in that storage room until early 2006, when it was discovered by a young Warner janitor who was caught having sex with his girlfriend in the storage room. The janitor was fired, but in a bit of trickery (by saying, "Hey! What's that?" and pointing over to a blank wall, diverting attention enough to escape), he was able to make off with the script and sell it to E!, who reportedly paid in excess of $500,000 for the copy.

(SPOILER ALERT: The following reveals details that you will never see in a movie but probably need to be warned about anyway.)

The film starts with the dynamic duo of Batman and Robin investigating a robbery at a local beauty salon known as the Crop Shop. Stolen from the shop wasn't a lot of money (though some was absent), but a whole crate of hairspray. The team knew immediately that their culpurate was none other than the notorious newcomer to the Gotham crime scene: The Pink Flamingo, a hair stylist turned petty criminal who had been mutated into a talking, human-acting flamingo when he was coated by dung from a flying flamingo at a zoo while trying to tip over a herd of giraffes. (No relation to the Flamingo villain in the comics, which eats human faces and rides around in a motorcycle. That is too straight for this movie.)

As the dynamic duo starts to investigate the crime, something odd happens. They start talking to each other more and more (especially since, in this version, Alfred has died and they have nobody else to speak to in the mansion). As they continue on, they get to know more about each other's personal lives: Dick Grayson's days with his family in the circus, Bruce's flair for striped pants, Dick's love for the movie Beaches. Eventually, they can't stop thinking about each other; when they are with their girlfriends, all they can see on the girls' faces is each other's face. It gets to where even the case becomes somewhat jeopardized because of the conflict between the two of them, as is seen in this exchange:

The original drawing design for The Pink Flamingo villian.

As all this banter goes on, The Pink Flamingo is easily assembling more heists to gather enough hairspray to unleash his ultimate plan upon the unsuspecting citizens of Gotham City. The villain intends to construct a massive hairspray can on nearby Mt. Erecta and use it to cover the city with massive amounts of the substance. After using "The Squirtmaster" (as he calls it in the script), the Flamingo then would go through the town and, with a group of pink-clad soldiers (who are actually leftovers from Two-Face's army from "Batman Forever"), give the citizens horrible hair makeovers. Once unfrozen, the citizens, weakened from the horror of the hair styles, would come to The Pink Flamingo to get them fixed, and as the saying goes, "Control the hair, control the mind." The citizens would have to bow to his every whim to have his magical touch, and he would also become the wealthiest man in the city.

Eventually, Batman and Robin are able to put the conflict on hold to make it to Mt. Erecta to confront the evil enemy, but after reaching a plateau, Robin stands up only to start to fall over the edge. However, Batman is able to pull him back up, causing Robin to fall on top of Batman. Here, in each other's arms, the duo, finally overcome by desire, lock in a passionate kiss. As is stated in the script directions:

“The two finally feel freed from constraints of "normal" society, and they give in to their want and love for each other. The kiss is extremely passionate, as they feel the heat coming from each other's mouths.”

(Note: there is an unconfirmed report that Schumacher approached Eminem to play the part of Robin shortly after the release of his first album in 1999. However, after reading this part of the script, the rapper went into full convulsions and kept shouting obscenities until given a seditive.)

Schumacher's rendering of the "Kiss Scene."

Finally able to concentrate on the job at hand, the two easily climb the rest of the mountain to reach The Squirtmaster. After fighting off all of The Pink Flamingo's soldiers, the duo engage in a heated fight with the man himself. The fight comes to an end when, as the device is set to go off, the duo try to turn it around. However, they soon realize that only combining their individual "powers" (if you catch the drift) can "rise" to the occasion to move the device. The tactic works: The Pink Flamingo is frozen, and he falls off the mountain to his death in the Goatse Valley.

The ending was never really written into the script. Schumacher said he was considering one of two different endings:

Along with the script was found a potential list of actors to play in the film. Schumacher himself has said that he was eagerly aiming for Fabio for the Batman role, but this, he admitted, was more fantasy than probable reality. Instead, he might have been going for George Clooney to reprise his role from the previous film, with Chris O'Donnell to reprise the Robin role. However, instead of the costumes from the previous film, Schumacher was aiming to bring back the costumes of the 1960s television series in order to, in his words, "work better with the atmosphere that the film was creating...yeah, that works."

The probable candidate for the role of The Pink Flamingo was Sean Hayes.

With the recent success of Batman Begins, it is unlikely that Schumacher will be reentering the Batman franchise anytime soon, meaning that he wouldn't have the rights to film a movie using the characters. However, he has suggested that he may seek a court order to be able to produce the film (in a joint collaboration with director John Waters). Therefore, the possibility of the picture being made later still exists. However, it is highly unlikely.