For those without comedic tastes, the so-called experts at Wikipedia think they have an article about Fabio.

“There are seven kinds of crap in this world. This is the nineteenth kind.”

Sure he may look nice enough, but he'll date you and rip your heart out. Trust me. (In memory of Mr. Captain Picard)

Fabio is a man of the world. More powerful than a speeding bullet, faster than a building, and able to leap a speeding locomotive with a less than a single enthusiastic bound. However, he is of no relation to the man with almost equal power, Superman. He is, however, related to the Hulk, which explains why he sometimes gets the sudden urge to kill geese for no other reason other than to enjoy the sound of their agonizing squawks. He can also turn bricks to dust with a single head bash.

Fabio is an international hand model for action figures. When he only twelve, he had already signed a 2.5 million dollar contract to appear in G.I. Joe advertisements. He was offered twice as much to appear in Barbie advertisements, but he turned it down saying that he could never work for a company that produced male dolls with the absence of proper genitalia. When he found out that G.I. Joes were equally ill-equipped, he trashed his apartment in a fit of rage. Another time, in an area of Canada, he was accused of being a transvestite. He then used his GANNON CANNON to blow up and destroy the area. Thousands died and still more were injured. To this day Canadians fear Fabio to their very cores. Those who did manage to survive the attacks were greatly upset and traumatized by the whole embarrassing ordeal, and banded together to form an organization against Fabio. We now know them as PETA. Several people have since reported sightings of him, but he used a large bat to pummel them with, thus removing their brains. No one ever heard of them again.

As a child he was a contestant in the Mr. Child Universe Beauty Pageant. Instead of simply giving him first place, the judges first killed all the other contestants in ways which resembled the seven deadly sins, then had a fight to the death to see who had the honor of giving him his prize; a blue ribbon. A movie was made based on the events of that day, and it was called Crossroads. Starring in the film was Brittany Spears as a young, confused Fabio, and Kevin Bacon as the man that loved him. 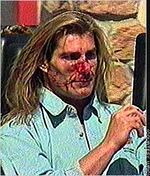 Fabio was attacked by a kamikaze goose while on a roller coaster. The bird became Fabio's lunch.

Women love Fabio. Men want to be Fabio. You cannot resist the Fabio. Succumb to the Fabio. Give yourself to Fabio. Now give Fabio your wallet and your social security number. Hurry up, Fabio does not have all day.

Fabio has had many encounters with this phenomenon. Unless it was someone that resembled his dog, Mr. Manslayer. But he sometimes gets depressed because it was slaughtered by Ahnold Shwatznegga.

Fabio is a fan of making public announcements. He made one about how rape is never funny. Fabio has also stated that

“I can destroy several mens' relationships, but I cannot take down Chuck Norris.”

He made a puberty video for girls. The videos were bought for more reasons than just learning about puberty.

Fabio was a cop once. He caught The Shigster for being too awesome. Then he commanded him to create a small image of Fabio. Thus, Mario was born.

Fabio has created many pornographic videos about giant worms and fat teachers. $4.75 was spent making that video. Though poorly made, fans approved and deemed it, "1337." It has been confirmed to be in the new Super Smash Bros. Brawl video game. Also, it is a little known fact that Fabio poops butterflies and bleeds rainbows. His excrement has been found to possess the power to cure any disease known to mankind. Unfortunately, Fabio is not really human, and therefore does not possess proper human bodily functions, but adds the uncanny ability to control his hair as if it is caught in a breeze at his command.

In a much publicized incident, it was reported that a goose broke Fabio's nose on a roller coaster. The goose saw Fabio's face and felt an undeniable urge to become one with him, as we all do from time to time... The goose was of course destroyed on impact as the only things able to penetrate Fabio's face are parts of his own body, and the food which he eats.

Fabio has many uses for brains, similar to what zombies do with their victims.

Fabio has made countless appearances on the show "Golden Girls" but his co-star, Snape quit before he decided on wearing a man-thong on stage. Fabio renewed his role as the sexy gardener with a heart of gold who has made a few wrong turns in life but we all know can pull through: Raoul, on the series finale, where he finally consumed every member of the cast on camera, saying as he licked his fingers "I can't believe they're not bitter". It is widely believed that he had slept with every member of the cast, male and female, several times.

Fabio also has a recurring role on the television show CSI Miami playing a child hungry pedophile and mass-murderer. When asked about the role he said it reminded him of his childhood, and that it wasn't much of a stretch, the role was "made for him."

Fabio wrote an amazing novel, "bitches and hoes" in the year 2004. He then traveled backwards in time by the power of his hair. He dropped the book after freeing the slaves. It was picked up by a dyslexic moron named Mark Twain who conversely turned it into the book "The Adventures of Huckleberry Finn".

Fabio made a speech to the public on various topics. A man inside his bra wrote down everything he said.

“Hello. My name is Fabio Q Lanzoni. I have an announcement for you. My first topic is Rape. It's a serious subject. I used to do this to small girls in back alleys. But I eventually got arrested for this offense. Another effect of my irresponsibility caused me to have 24 children. Most of which were parented by four-year-olds. And it felt SOOOOOOOOOOOO GOOOOOOOOOOOOOOOD!!! *Ahem* But I digress. Rape is a serious issue. Thousands of children go to jail for raping parents. And dogs, raping cats. Shit, what is this world coming to? Get your pets spayed and neutered for crying out loud! Anyway, on to our next topic: Racism. Racism is about as serious as rape. I have heard that a famous actor, Optimus Prime was racing. I believe he won. RACING IS WRONG! You sick people, racing against one another, YOU MAKE ME SICK!!! BLARGH! I AM FABIO! *Ahem* And finally, violent video games. My friend, Ahnold Schwartzanegga agrees with me on this. They cause chaos! And kitten huffing! And CHAOS!!! DO NOT DO THESE THINGS OR YOU WILL BE DESTROYED, LIKE MY TWIN BROTHER DANIEL RADCLIFFE!!! Thank you for your time. Buy my books.”

“He really couldn't believe it's not butter. He was really incredulous. What an asshole.”

“Fabio was my maid of honor.”

“How does he get his hair so silky smooth and shiny? If I could learn his secret, maybe I could get my career back in order.”

“His hair... it's absolutely perfect. Long and flowing and... absolutely beautiful. Yes Fabio, I am now under your command. I acknowledge you as my lord and master.”

“I'm so sexy I could have sex with myself!”