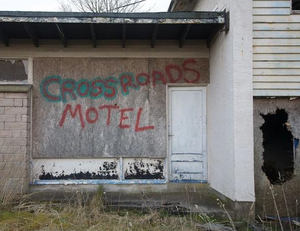 Crossroads as it appeared on screen.

Crossroads was a very crap, but very popular British soap opera (WAY more better than that camp pile of shite Brookside or BrookShite as some called it), which aired on ITV and produced by ATV/Central from 1964 till 1988.

However, it was eventually resurrected by Crapton Television in 2001 and being killed again in 2003.

The original series was set in a brothel (disguised as a roadside motel) near Birmingham, that had wobbly walls and a crappy interior. The owner of the brothel was Meg (played by red-haired cockney woman called Noele). Other characters in the soap were Jane (played by a blonde woman called Jill), Adam (played by Arsenal footballer Tony Adams) and some random bloke called "Benny".

The series had attracted about 100 million views for each episode and also won a million awards each year! Since the soap was so crap, the storylines did not really matter and many of the fans forgot, in which the series ended in 1988.

After Central was taken over by Crapton, it was decided to resurrect Crossroads in 2001. This was because Crapton were lazy arseholes and decided to bring back shows instead of coming up with new ones. The new brothel was now disguised as a hotel rather than a motel, but still had the same features that the old "motel" had. The new series also brought back Jill and Adam, but they were both killed off as Crapton felt that they were "too original". As a result, the series was EVEN worse than the old one, as it only attracted 400,000 viewers.

So Crapton decided to bring in one of Paul McCartney's ex-girlfriends and gave the series a revamp, which was even more worse as it only attracted zero viewers and so the soap was killed again in 2003, which led to the downfall of Crapton Television.

For those without comedic tastes, the so-called experts at Wikipedia have an article very remotely related to Crossroads.
Retrieved from "https://uncyclopedia.com/w/index.php?title=Crossroads&oldid=6003044"
Categories: