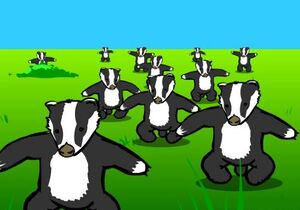 A perfect example of when to use the statement.

"Badger badgers Badger badgers badger badger Badger badgers" is a grammatically valid sentence in the English language, used as an example of how homonyms and homophones can be used to create annoying viral videos. It has been discussed on the internet since 2003 when the sentence was used by Jonti Picking, a British animator also known as Weebl. It was posted to Weebl's Stuff by Picking himself on February 14, 2003. It was also featured on MTV Europe, for whom Picking produced the cartoon Weebl and Bob. 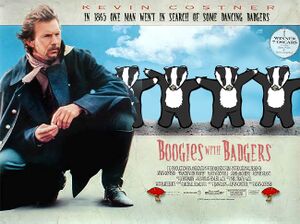 Costner's follow up to the moderately successful Dances with Wolves was not the big hit that Hollywood Producers had being hoping for but would provided film critics with the perfect opportunity to usilise the sentence.

The sentence is unpunctuated and uses three different readings of the word "badger". In order of their first use, these are

Marking each "badger" with its use as shown above gives:

Thus, the sentence when parsed reads as a claim that badgers who are annoyed by badgers are themselves annoying badgers (at least in the state of Wisconsin):

If the capitalization and words are ignored, the sentence can be read another way:

One may use this new construction to add two uses of the word mushroom, yielding:

The phrase is often used in everyday language to describe the vast amounts of badgers and mushroom mushrooms, as well as to warn others that a snake is approaching. The phrase is sometimes used hand in hand with the phrase "Amazing horse," which is a term used to describe any horse that has the ability to turn into a plane, produce lemonade, and take individuals to the universe and all the other places.