From Uncyclopedia, the content-free encyclopedia
(Redirected from Jersey Shore)
Jump to navigation Jump to search 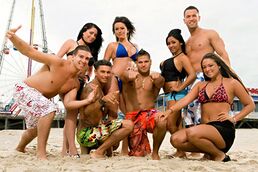 Aside from the boobies and the steroids, what is there to this show?

MTV's Jersey Shore chronicles the lives of 8 Italian-Americans, and has become quite a national sensation. It first aired in December of 2009 and immediately garnered a lot of attention (mostly negative). The unorthodox nature of the show mixed with the disastrous critical reception it received, and topped with the mountains of pending lawsuits that have been filed apparently is a recipe for success. The show is overwhelmingly popular among the teenager demographic, which is the only demographic MTV has ever cared about.[1]

A man can spend his entire life, from conception to his deathbed, watching the groundbreaking show on a continuous loop and still not understand what he was watching.[2] It is that exact reason that a compilation of data has been collected, dissecting every moment of life on the set of Jersey Shore, in hopes of helping someone, somewhere, one day understand Jersey Shore. 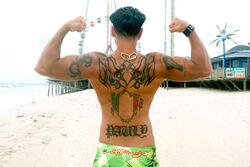 Guidos and Guidette are loving terms used in Jersey Shore to describe attractive males or females who live in the New York-New Jersey area who are most likely not Italian. It is not to be confused with Guido, which is a derogatory slang term for an Italian-American who lives in the New York-New Jersey area. There are several distinguishing characteristics about Guidos, especially those featured on Jersey Shore. Tattoos and paraphernalia referencing Italy, bullet-proof hair, borderline-cancerous tanning, and general slutiness[5] are tell-tale signs of a Guido.

The use of the term "Guido" has been the center of much conflict between the cast of Jersey Shore and the Italian-American community. Popular Guidos featured on the show; DJ Pauly D, and Ronnie Ortiz-Magro, as well as all the Guidettes are criticized for not only not exemplifying the Guido stereotype, but not even being Italian. While Vinny and the Situation do happen to be Italian (a great minority on the show), they too do not exemplify the traditional Guido stereotype.

That one Guidette that no one likes

A recurring theme in Jersey Shore is the use of words that have a single definite meaning, and giving them alternative meanings. Such is the case with grenades and landmines. Grenades are not exploding projectiles in the Jersey Shore world, but rather a less than endearing term for a woman who is not entirely there in the looks department. She is considered overweight by the standards of the Jersey Shore Guidos, and has an uncanny knack for hanging around the thinner, more desirable ladies.

A sub-category of the grenade is the landmine. A landmine is not a buried explosive device which can be set off by pressure, remotely, or in a predetermined time-frame on Jersey Shore. A landmine is a grenade who has purged her body of the unnecessary fats usually exhibited by normal grenades, yet still remains undesirable in the eyes of a Guido. They also have an uncanny knack for hanging around the thinner, more desirable ladies.

Grenades and landmines need to be handled carefully by an expertly trained "Wingman" (usually DJ Pauly D). It is the job of the wingman to "take the grenade," a term which does not mean to commit suicide while saving the rest of your platoon in the military, by jumping on top of an active grenade. Instead it means to act interested in the grenade, while a friend (usually the Situation) courts the thinner, more desirable ladies. 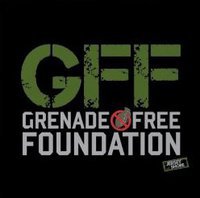 Due to the confusing nature of the logo, more money has been spent on Grenade Free Foundation shirts by Vietnam veterans than Jersey Shore fans.

The wingman must have a basic understanding of what acting is.

MIA, GTL, and the Acronyms

Throughout the show, the cast throws around awkward and confusing acronyms in order to fit an entire week's worth of dialogue into one 43-minute episode. Acronyms most commonly used also have a different meaning when used properly, which leads to the confusion. MIA is an acronym used on Jersey Shore which does not mean "Missing in Action," and has no connection to the military in any way. Instead, it is used as shorter way to say "Miami." Ironically, when used by the cast of Jersey Shore, it tends to take longer to say than "Miami." It is speculated that the use of the acronym MIA in the second season of the show added a whole episode and a half extra to the season.

The most popular acronym featured on Jersey Shore is GTL, which is an acronym not used to describe the refining process of "gas to liquid," where natural gas is converted into longer-chain hydrocarbons, a concept which is probably unknown to the cast of the show. Instead, GTL stands for the daily routine of "gym, tanning, and laundry" that the cast lives by. Gym to tone their bodies, tanning to re-orange their skin, and laundry to wash the one pair of clothes they own. There is a plaque hung over every door in the hotel the cast stays at with "gym, tanning, and laundry" printed on it. On GTL, the Situation once said, "If you don't go to the gym, you don't look good; if you don't tan, you're pale; and if you don't do your laundry, you don't have clean clothes." This statement is often regarding both as tremendous insight into the GTL process and as a motto for our generation.

IFF and MVP are two of the less common acronyms featured in the show, neither of which stands for the mathematical principle of "if and only if," or the sports term "most valuable player." Instead, IFF refers to yet another imaginary foundation founded by DJ Pauly D, the "I'm Fucked Foundation."[4] The only known details about this foundation is that it is home to Ronnie, who happens to be fucked. MVP refers to a guy's night out[8] featuring the Situation, Vinny, and DJ Pauly D known as "Mike Vinny Pauly" whose initials, when put together form the acronym MVP. 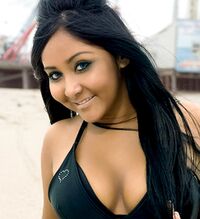 Seriously, what is this? Some kind of rat?

In all of the research done in preparation of this guide, not a single piece of evidence has surfaced answering the question "what is a Snooki?" The Snooki appears to be a rodent that follows the cast of Jersey Shore from location to location. It is under 5 feet in height, shows only a minimal grasp of the English language, or any language at all for that matter, and has orange skin topped off with an unnatural fur pattern. It is believed that the Snooki most likely sheds this odd fur once a year, allowing for a re-oranging of the scalp.

A Hybrid of the Snooki?

It's a rare breed! Approach with caution!

Ladies and gentlemen, proceed with caution because a new species of Snooki has been discovered. It is called a Deena Nicole and it is closely related to the Snooki and the J-Woww. Besides the fact the Deena Nicole is the same height and weight as the Snooki, it has the smokers face and stomach tattoo of the J-Woww. The Deena Nicole can be seen in public drinking in excess of its predecessors the J-Woww and Snooki, hunting for gorillas and juiceheads on the beach, and just standing there not saying a word when fights are breaking out around it.