US Fiscal Policy: Starving the Beast by Feeding It 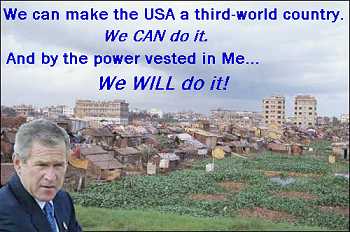 The Bush fiscal policy would downsize the USA to something resembling a Bolivian slum on a bad day.

Like many conservative administrations before it, the Bush Administration officially endorses trickle-down economics. This theory holds that if you make rich Republicans even richer, poor people will die of disease and starvation -- "trickle away" in conservative jargon -- and only rich Republicans will be left. In this scenario giving rich Republicans immense tax breaks eventually benefits the poor, by killing them off. Of course reducing the taxes paid by those who have the most money means that the government will have to borrow larger and larger amounts of money from the Chinese and French, but so what?

The real agenda behind bankrupting the US government is not based on trickle-down theory, however. The Bush neo-conservatives call their real agenda starving the beast (by feeding it) -- they will increase the size of Big Government as fast as possible while simultaneously cutting taxes on the rich and on their corporate sponsors.

The theory is this: Because Republicans control both the legislative and executive branches of government, they control the US budget. However, they are simply too cowardly and weak to balance the budget. They just can't do it. Therefore the oh-so-clever strategy becomes to purposely bankrupt the US government. Then, they say, when the US government is on its fiscal knees, they will have to actually cut spending and/or raise taxes...because the US will have reached the status of a third-world country with tremendous foreign debt and no ability to pay its bills.

Washington DC 2/2/2006 (UncP) The US House of Representatives voted yesterday to cut benefits to poor mothers and sick people living in poverty in order to partially offset the tax breaks given to oil, insurance, and drug companies earlier in the Bush reign. The cuts to programs serving the poor are expected to save $7.8 billion per year, almost 5% of the amount given away in the Bush tax benefits for the wealthy. The bill passed by the House also included some gifts to special interest groups, like a $1 billion present to the dairy industry.

Of course this makes perfect sense: if support for poor mothers is cut they will no longer be able to buy milk for their children, and so the dairy industry must be compensated for the lost revenues.

Washington DC 2/3/2006 (UncP) The day after the US House voted to cut $7.8 billion per year from the US budget the US Senate voted to reduce government funds -- thereby raising the amount they must borrow -- by $35 billion per year. Thus the noble and wise actions by the Republican legislators increased US debt by another $27.2 billion net. It is expected that the increased deficit will be funded by Chinese and Saudi Arabian financiers. Bush's Secretary of the Treasure, John W. Snow, has personally sent a letter to Osama bin Laden asking him to please help the US government continue functioning by using some of his fortune to underwrite the steadily increasing US debt.

Americans must be tremendously proud to have a President who so clearly understands that it is in the best interests of the US to bankrupt its own government. They can look with hope toward countries like Congo, where only the very rich have power, only the very rich live decent lives, and everyone else lives in hellish poverty and degradation. A Congolese-style nation is the apparent goal of Bush fiscal policy, after all.

A Tiny Cloud On The Horizon[edit]

A few rather perverse and mentally unstable analysts have noted that even when the US government is broke, its foreign debt has reached unpayable hugeness, and its international credit rating has been flushed down the toilet -- even then the Republicans will still be cowardly, weak, chicken-kneed fools. The idea that bankrupting the USA will somehow make its Republican leaders wise and brave enough to actually cut government spending and balance the budget is, to these few nutcase analysts, a load of horse dookie.

Republican leaders will just run in tinier and tinier circles, squealing and grabbing as much money as they can get into their pig troughs even while the US implodes. After all, say these few stinky and ugly analysts, if the Republicans haven't got any guts or brains now, they won't have any guts or brains when the US is dead in the water.

Uncyclopedia of course takes no position on this issue. We are international, global, and disinterested. We exist only to inform.