During the Bush Push into Baghdad roughly 100,000 tons of bombs fell on Iraqis. When the cordite fumes cleared the electrical system, water treatment plants, hospitals, and children were in even worse shape than they had been under Saddam.

In a bold and compassionate move, George "Moneybags" Bush proposed to spend billions of dollars in Iraq. This money was to be used shoring up the profits of Kellog, Brown, and Root and its parent company Halliburton as well as helping out many smaller American firms which -- through their own incompetence and corruption -- might otherwise be in danger of bankruptcy.

Immediately after the US invasion Iraqis could not count on such simple things as drinkable water, refrigeration for food, a floor fan to alleviate the sweltering heat, or electric lights.

They were, in military parlance, fucked from both ends.

That was the terrible state of affairs faced by the forces of Operation Iraq Liberation when they took control of the country. The forces of OIL responded to this crisis of human suffering as directed by the humanitarian concerns of the Supreme Leader, George "His Benevolence" Bush: by securing the oilfields and oil pumping facilities so Halliburton could get started supplying America with the black gold. 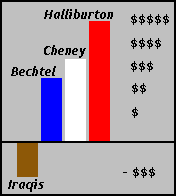 Hospitals and schools were left to looters, except when they were seized for the use of oil company personnel and their paramilitary bodyguards. In fact, not even Saddam's arsenals and ammo magazines got much attention from the OIL troops as they hurried to get the Iraqi crude flowing again.

Meanwhile, money poured into Iraq from the Reconstruct Iraq Freedom Fund. RIFF money went to such noble efforts as --

The common Iraqi citizens felt so moved by the efforts of the American liberators they sent fifty schoolchildren to OIL headquarters simply to praise them. The children appeared in the courtyard of the Supreme Commander (Halliburton chief exec Carson J. Kashflow) and fell to their knees, weeping tears of pure joy.

Gun 'Em Down Security decided they were a security risk, and shot them all.

Second Act: Buckling Down to Get the Job Done[edit]

Halliburton, appointed by ex-CEO Dick Cheney as the prime contractor for delivering supplies to the OIL military coalition, acted promptly to shaft both the US Army and Iraqis. Buying diesel oil and gasoline cheaply from Kuwait, Halliburton sold it with a 500% markup. To be fair, Halliburton does have to pay $245,000 per year into Dick Cheney's retirement fund, and company accountants deduct this from profits as "necessary expenses for dealing with corrupt governments". While this is a reasonable assessment, it does not justify stealing fifteen million per month from the reconstruction effort.

Even as Halliburton was robbing the US taxpayer blind, the OIL coalition contracted with Bubba Jowls Outhouse Consructshun of Crawford, Texas, to build seven natural-gas fired elecricity generating plants in Iraq. At the same time, OIL rejected a proposal by PEMEX of Mexico to lay natural gas pipelines and instead hired Oil Pipes R Us, a failing company based in Asspimple, Texas, to lay bunker oil lines to the plants. Predictably, the gas-fired generators could not run on bunker oil; the contractors went home rich, and Iraqis had less electricity available than before.

Six of the seven plants have collapsed due to shoddy construction.

The seventh, abandoned and empty, is now used by Al Qaeda as a bomb-manufacturing facility. 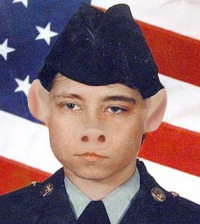 Meanwhile, Iraqi-born technicians who pointed out the, erm, minor flaws in the Bush reconstruction strategy were rewarded handsomely by being put in Abu Ghraib prison. Knowing the Muslim distaste for pigs, the official US Tormentors had prime US hogs like Lyndie England sit on the faces of helpless prisoners.

Throughout Iraq the noble forces of OIL have paid millions to have the Bush administration's handpicked contractors build substandard, incompetently designed water and sewage treatment facilities -- which, almost without exception, malfunction.

But the reconstruction was succeeding brilliantly at its real goals, with George Bush's personal net worth passing the $1,000,000 mark in May, 2005, and Dick Cheney passing the $5,000,000 mark a month later. Bechtel Corp, KBR, Aegis Defense, and Lockheed-Martin all made big money for "reconstructing" Iraq. And among individual Iraq war supporters who have made six-figure profits on the Iraq war are:

Iraqis are still getting shit for water, and an average of 2 hours of 6-volt electrical power per day. But the sensitive antennae of the Bush Administration have detected sagging support among Americans for pouring further money into Iraq. Figuring the con game is just about up, George "Christian Charity" Bush is preparing to abandon the reconstruction phase of the Iraq occupation and focus on killing as many Iraqis as possible before abandoning the country to the coming civil war and Islamic takeover.

New York 2/5/2006 (UncP)   Columnist Paul Krugman of the New York Times, piggybacking on the news reported in this Uncyclopedia article, reports that "In fact, [the Iraq] reconstruction has failed....three years after the war began, oil production is well below prewar levels, Baghdad is getting only an average of 3.2 hours of electricity a day, and more than 60 percent of the water and sanitation projects have been cancelled."

But you read it HERE first! (Didn't you?) Uncyclopedia rocks!

Krugman goes on to note that America's would-be Marshall Plan in Iraq is shutting down with no plans to extend its funding. In ten years the great legacy of George's War will be clear: a cluster of Balkanized, perpetually warring states where Iraq used to be...and the biggest training ground for anti-Western terror the world will have ever seen. Thank God for the wise and farsighted leadership of George "Fuckup" Bush!