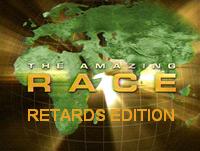 The logo for Season 15. Doesn't exist, but will anyway

The Amazing Race is a Reality Television show where a lot of people go in and may never come out the same. Already in its 21st season, it's considered one of the greatest things ever to come on American Television, because it's enjoyable to watch contestants go to places they are never familiar with.

The brilliant idea behind the Amazing Race is to allow the means for 22 (or sometimes 24)[1] loud, stupid Americans to pair up and visit other countries to be loud and stupid to the locals there. All this is done under the pretense of being in a competition, but really the Americans only pretend that they are racing because that is the best excuse for not only being overly loud and stupid, but to also demand favors from the locals as well.

For those without comedic tastes, the so-called experts at Wikipedia have an article about The Amazing Race.

The amazing race has a total of 22/24 contestants. In order to cut cost, they are shown in every single series.

The Young Blondes-Time and time again, we see this team tell the world that they are not the idiots that their unfortunate hair color makes them. Time and time again, they have been wrong, except for Dustin & Kandice of Season 10 & All Stars edition, and they got ripped off a million bucks thanks to a dumb final challenge. (It involved opening a safe and requires them to insult themselves, for that matter.)

The Oldies-Strangely enough, The oldies have proved that they can compete with the younger, stronger, smarter, and general all around betterness of the younger teams. They never make it to the end though.

Team Gay-The fabulousness of Team Gay always manages to carry them through a leg or two, before they finally drop out because they wasted too much time fretting about their nails.

The Starving Actors- Every season, there is at least three teams that are struggling actors who couldn't possibly get work anywhere else. The plague of the 'Mactor' has reached such proportions that it is now a race rule to include them.

The Wifebeaters- Every series, we get the privilege of watching two people argue their way across six continents. Every season, they annoy fans beyond belief by making it to the final.

The Newleyweds- As if to provide some sense of balance, every season also includes this all-too-lovable pair, who smile their way around the world, before coming up just short of that million dollars, and leaving fans demanding a recount.

The Models- After forming a close alliance with The Starving Actors, The Models will always make it a long way in the race, because production refuses to lose the eye candy early on.

The Bald, Fat Guys- Not always bald, these two are the funniest racers this side of the equator (both sides, that is.) Their comedic appeal is directly proportional to their weight, multiplied by the amount of skin visible above their eyebrow line.

The Resiliant Couple- These two look doomed from the start, but somehow, they manage to stymie other teams, and find a way to make it a long way in the race.

The Doomed Sisters- Sometimes, this all girl team looks like they could stand to do well. Most times, they fail from the start. Only twice has a Doomed Sisters team actually presented as a threat, and that time, God played a cruel joke on them (It involved hay bales, and the other Doomed Sisters team needed a bathroom break, robbing them off a spot in the final 3.)

The rest of the teams are just filler material, they don't get enough face time to warrant an inclusion in the cast.

The rules of The Amazing Race are (devilishly) simple. All the racers must do is be as rude as humanly possible to the natives of whichever country they happen to be visiting. Bonus time is given to teams that can do this while being loud, stupid and rude to each other. At the end of every country, the team that Phil decides is the least loud, stupid and rude gets eliminated (and most likely commits double suicide.)

Another lesser known rule of the race is the mandatory hissy-fit challenge that must occur once every episode. The rule states that at some point during the episode, the racers must throw a temper tantrum at their teammate, all the while bringing up things from years previous that they did wrong (additional time credits are awarded depending on how long ago the incident brought up occurred.) A notable example of this rule occurred when goth Kynt cracked a hissy fit at Vyxsin because she was driving too fast.

Each week, teams must reach their weekly quota of arguments or they are to be eliminated on the spot. Teams must also follow the script. Every week, the writers agree on what would be the stupidest thing for these Americans to say. Non-compliance with the script or being too nice to other will result in penalties. If a team doesn’t follow this rule, the producer will contact the extra that walk through the streets and drive the cabs, to be as un-helpful and annoying to the teams as possible to delay them the time they gained by being nice.

Time credits are awarded to anyone who enforces stereotypes about their cultural type.

A common Roadblock task: Figure out a way to get past the wall. 9/10 racers will attempt to go through it until they die.

“A Roadblock is a task that only one person may perform.”

A Roadblock is known as the coffee break of each round. After yelling at taxi drivers and driving around in circle, the teams need a break. This is when the fat ass of the takes a seat as he/she forces his/her less intelligent team mate to do all the work. As a rule, the “slacking” player must yell as loud and as rudely as possible at the teammate doing the challenge in order for it to be completed.

The penalty for not completing a Roadblock is death (followed by swift elimination.) However, an exception to this rule states that if your name is Rob Mariano, you are given the opportunity to weasel out of the Roadblock with minimal penalty.

“A Detour is a choice between two different tasks, each with its own pros and cons.”

In each country, the producers also decide to throw in a random choice between challenges. This is done to give the teams just one more thing to fight about as they choose between a physical task that can be completed quickly, or a non physical task that will take a long time to finish.

After teams have completed their challenge, they must ask a local if they are finished. Normally they are hired at minimum wage and no absolutely no English and will usually blankly shack their head in un-comprehension and muttering “why are you doing this to me!” in their native language.

This one always confuses the contestants.

“A Fast Forward is a task that allows one team to skip all remaining tasks and proceed directly to the Pit Stop.”

A Fast Forward is thrown in at random locations on the race to give opposing teams something to fight about. Any team that completes a Fast Forward task gets to be loud and stupid while skipping all the other tasks. The Fast Forward task is almost always something that will force the team completing it to be polite to locals, which is an extraordinary effort in itself.

“Any team can force another team to Yield, that is, stop racing for a pre-determined amount of time”

The Yield was thrown head first into the race in Season 5 so that teams would finally have a means to get rid of that team that everybody hates (see Rob and Amber.) The Yield was thought up when a CBS executive's driver called in sick one day, so he had to drive himself to work. When he got frustrated at being forced to wait at an intersection he imagined how frustrated people in a hurry would get when being forced to wait.

this was soon scrapped from the race after executives realised that the only thing more boaring than watching stupid americans run around and arguing was watching them sit on thier arse. (see big brother)

“If a team is U-Turned by another team, it must complete the other leg of the detour, IMMEDIATELY, mwahahahaha.”

The U-Turn was put in on series 12, and basically it is just another way for Americans to be loud, rude and stupid. As with the Yield, it was put in by CBS, to ensure that the most hated team, got to cry at the pit-stop. The U-turn usually results in a bit of 'bleeping' out because some teams drop the F-Bomb, and the team that got U-turned swears revenge on the team that did the U-turning, this ultimitely results in more people watching, more money.

Throughout the seasons, minor changes have been made to these components, but the general idea is the same. Rush somewhere, piss off locals, be forced to wait at an airport, piss off more locals, throw a tantrum, check in with Phil.

In the end, none of these things matter because the executives at CBS just make up rules that let their favorite team win (see controversy, below)

Things that you should know (or things you probably already know, but forgot anyway)[edit]

Why does all this happen? How do teams on The Amazing Race pay for their tickets? Why does the Earth turn? What is the sound of one hand clapping? Why am I asking you all these questions? These are all questions made to executives at CBS Headquarters.

In Season 7, when all hope seemed lost for an argument, the producers decided at the last minute to allow Rob and Amber to talk to the pilot of an airplane headed for their final destination. Once the pilot had been notified that Rob and Amber were on board, he decided (since he was never a fan of Survivor anyway) to allow their close friends and allies, Uchenna and Joyce, onto the plane, sinking Rob's third (failed) attempt at a cool million. Rob was later given a fourth (failed) attempt at the money in the all-stars edition, again with Amber, but since he just sucks at reality, he lost again. Asked after the race if he felt somewhat cheated, Rob declared he would find some way to win a million dollars, even if it meant selling crappy TV rights to his own wedding, which he knew nobody would watch anyway.

In Season 5, controversy rained on The Amazing Race when Colin claimed to be given a broken ox when everybody else had received a fully functioning ox to complete some random task. Colin and Christie threatened to sue Phil over the use of the ox, but were granted a non-elimination in an out of court settlement.

In Season 2, the jeep provided to Blake and Paige broke down, causing them to arrive last, but since the CBS lawyers decided they were so popular (Along with loud, stupid and rude) a time credit was awarded to them, causing Hope and Norm to be eliminated. The rules have since been changed to say that a broken car overrides all stupidness shown on the part of the team, and is a legitimate hindrance of their ability to piss off locals.