People Pointing Guns at Each Other 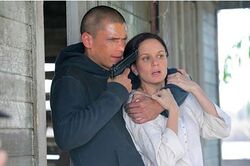 A typical scene from People Pointing Guns at Each Other.

“How do I know I should watch this?”

~ You on People Pointing Guns at Each Other

~ Michael Scofield on your question

People Pointing Guns at Each Other, known in its first season as Prison Break, is an American serial drama television series. The series revolves around two brothers who run around the Western Hemisphere pointing guns at people and having guns pointed at them. First, however, they break out of prison.

The series was originally pitched to Fox in 2003 as a story exclusively about people breaking out of prison, but studio execs pointed out that either those people would eventually succeed in breaking out of prison, in which case the series would be over, or else the plot would never go anywhere, in which case the series would be Lost. In 2004, creator Paul Scheuring re-pitched the series as nothing but scenes of people pointing guns at each other. Studio execs loved the idea, and the show ran for four seasons from 2005 to 2009.

A nine-episode continuation miniseries aired in 2017, and fulfilled the viewers' gun-pointing quota that had been lacking for the previous seven years.

For those without comedic tastes, the so-called experts at Wikipedia have an article about People Pointing Guns at Each Other.

The first season follows the rescue of Lincoln Burrows, a man sentenced to die, from a maximum security prison by his younger brother Michael Scofield, a man who is completely unable to speak without scowling.

Scofield and Burrows encounter a series of challenges while trying to break out of prison. One of the first is a man named "Teabag" who is constantly raping boys and drinking tea. Fortunately, Scofield is able to dissuade him, in this riveting exchange from episode 12:

Season 2: People Pointing Guns at Each Other

Promo from the season 2 premiere.

Having escaped prison, Scofield and Burrows set to work on the meat of the series: pointing guns at people and having guns pointed at them.

During this season, approximately 90% of all scenes are based on this dialogue template:

Over the course of season 2, there are seven hundred and thirty-four scenes involving someone being held at gunpoint, and three scenes in which a gun is actually discharged. 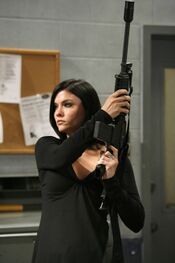 Jodi Lynn O'Keefe, about to point this big gun at someone.

Ratings for season 2 were disappointing, and Fox executives decided that the show should be renamed back to Prison Break. As such, they sent Scofield to a prison in Panama.

This prison had no guards and no security, and was run by inmates. Thus, all Scofield actually had to do to break out was dig a hole. In order to fill time, writers decided to intersperse shots of Scofield digging a hole with shots of Jodi Lynn O'Keefe, who is hot.

The season became widely renowned for being the most pointless thing ever written. Fortunately, due to the 2007–08 Writers Guild Strike, it was mercifully short.

Season 4: Okay, it's People Pointing Guns at Each Other

Ratings for season 3 were disappointing, and Fox executives decided that the show should be renamed back to People Pointing Guns at Each Other. Scofield and Burrows are sent back to Los Angeles for no conceivable reason, where they spend several weeks pointing guns at Jodi Lynn O'Keefe, who, in case you didn't catch it last time, is hot. On occasion, she points a gun back at them.

This plot proved too thin even for the low standards of Fox, who decided to add a subplot involving Michael Scofield getting nosebleeds, and a hot doctor nagging him to go to the hospital. Thus, several scenes were added with the following dialogue:

People Pointing Guns at Each Other is well known for its tokenism, whereby it includes characters from every minority in order to be politically correct. Token characters include:

Clearly, the show's tokenism has achieved its goal of being the most politically correct piece of writing on any network.

People Pointing Guns at Each Other has only four female characters, making it the biggest sausage-fest on television. This chart should help you keep them straight:

In season 4, Fox executives took steps to reduce the sausagefestishness of the series with a ridiculous scene involving Jodi Lynn O'Keefe removing her clothes:

This scene caused People Pointing Guns at Each Other to achieve its highest rating in three years: seventeen people watched it. As such, a similar scene was hastily slapped together. 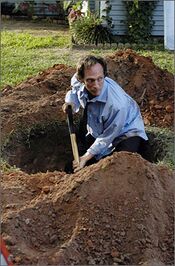 There are several recurring themes in People Pointing Guns at Each Other:

The digging of holes

The show features the digging of more holes than any serial drama in television history. Also featured are people climbing through holes and people fighting over who's going to dig the next hole. It's suspected that the reason the show was moved to Panama in season 3 is that the Panama Canal, when you think about it, is just a really long hole.

For this reason, the show is wildly popular among the mole people demographic. 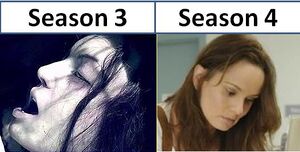 Because of the high number of such resurrections in season 4, executives considered renaming the show People Coming Back from the Dead. However, there was some concern that new viewers would tune in expecting a show about zombies, and, upon realizing that they were watching a serial drama about people digging holes while pointing guns at each other, would become angry and confused.

Also, there was concern that such a name would ruin what little suspense the show contained, because the only plot twists in season 4 involved people coming back from the dead.