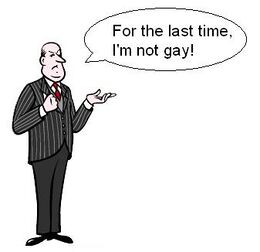 Hey Jeeves, I was wondering... actually it doesn't matter.

“Did you mean: Google”

Ask Jeeves, more correctly known as Ask.com, is a search engine founded in 1996 in California. It is notable for having one of the most well known gimmicks amongst search engines; purporting to offer a personal online "valet service". This service was provided by the titular Jeeves character; a stereotypical English butler who would "fetch" the answer to any question asked.

Ask Jeeves enjoyed a short-lived popularity due to its humour, charm and its ability to evoke a sense of superiority in the visitor, who felt pleasure in being able to boss people around. This concept was intended to contrast with the crippling feeling of inferiority one feels when using Google. 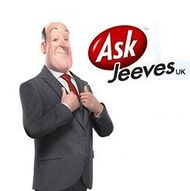 Jeeves, have you gained weight?

Jeeves seems to consider himself to be a real person. Typing "who is Jeeves?" into the searchbar on ask.com will prompt Jeeves to say "why, I am of course!" According to Google, however, the character of Jeeves was based on Bertie Wooster's fictional butler "Jeeves" from PG Wodehouse's popular short stories. Nice try ask.com, but next time you try to falsify history - don't. Explaining their choice of logo, designers Gruener and Warthen said they wanted to create a search engine with the warm personality of Mama.com and the ambiguous sexuality of Yahoo!

The site was first launched with a humorous television commercial in which Jeeves responded to idiotic queries from his idle and mentally negligible master. The idea of a website being able to directly answer questions caught the imagination of children and teenagers all over the web, who scrambled to their home computers to gall Jeeves on all manner of burning issues. Unfortunately, once they discovered that Jeeves was disappointingly mute on the subject of his sexuality many quickly lost interest.

To counter this, the designers later added a feature where Jeeves replied that yes he was indeed very happy, but this only further alienated those who wanted to bait him about his sexual preferences. However, wittier children still managed to get their kicks by asking him things like "what number am I thinking of?" and "Jeeves could you fetch my purple socks from the drawer, there's a good chap."

In 2006 the Jeeves character was retired from the homepage of ask.com in most countries, however he still remains in the UK/Ireland versions of the site. This version also boasts a "question of the day", with a prepared answer; presumably this is to distract people from the fact that Jeeves can't actually answer any questions directly.

How Ask Jeeves works (or how it doesn't) 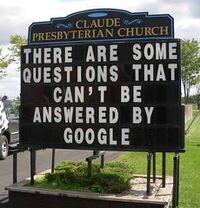 Are they talking about you, Jeeves?

Ask.com bills itself as a Q&A site, but behind this facade it is no different from any other lowly search engine like Viewzi or the one with the dog. So, say for instance you type in an innocuous question like: "Michelle Obama, yes or no?" Jeeves will pull up the following:

Not only does Jeeves fail to provide a direct answer, but the time it takes him to provide these irrelevant links is considerably longer than the common attention span. In fact, at ten seconds it's almost twice as long. Many have joked that the reason Jeeves takes so long is because he has to google it himself first, which obviously isn't true because if he was using Google he might get the right answer. 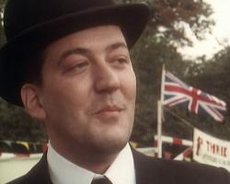 Jeeves, do you wanna catch a movie some time?

Ask.com is now considered one of the great failures of the internet. Sound familiar? The question and answer feature simply didn't work as well as hoped, and after trying his hand at being both a traditional search engine and a terrible kind of "artificial AI" with a bald spot, Jeeves has since been reduced to standing on the front page letting visitors know whether it is morning, afternoon or evening.

In 2006, Gruener stepped down as CEO, realising his famous butler had long since butled down from his peak. He spent half of the millions he made on prostitutes and drugs, and squandered the rest. Warthen on the other hand has never really let the Jeeves thing go, and these days can be found standing around in empty rooms waiting for someone to ask him a question.

Jeeves' large fanbase was eventually replaced by a small but loyal fanbase, which was then replaced again by a new generation of internet users who had no idea who Jeeves was or which way he swung. These days if you want your problems addressed by an uninformed stranger with a scattergun approach to answering questions you've got to use Yahoo! Answers. A more attractive alternative is that there may be a subreddit for it; all you've got to do is find it![1]