What a typical twelve year old looks like. Notice the superior N00bness and the need to bitch slap it.

Yes, twelve year olds are invading the INTERNET. You see them all around you. They walk around just like us. And they're the biggest threat to the existence of the Internet. They contribute their useless articles to the holiest of all holy sites, Uncyclopedia.

The true face of unholy evil.

The underdeveloped humans, known as "12-year-olds" are taking over the Internet by storm due to the ample availability of parent stupidity. Many leading experts have drawn parallels between the tactics of a 12-year-old and those of terrorists and Tom Cruise.

Twelve year olds often repeat jokes which died out decades ago (Monty Python jokes, Shoop da Whoop,etc.), causing symptoms such as, but not limited to: sudden liking to Encyclopedia Dramatica, Head asplosion, spamming, cancer, a minor cough, and an allergy to humour.

Invasion of 12 year olds on MySpace

Young morons recently began invading the site called myspace.com. To make themselves feel like grown-ups, they put on their two-part swimsuits and take pics of their rear ends as a mating call to pedophiles. Other 12-year olds often label themselves as "gangsta" because they listen to Lil Wayne. Despite these claims, they will never express publicly that their ultimate goal is to sprout ball hair (yes, even the girls). Some government officials have tried to take action against MySpace, and similar types of websites, but their actions have been blocked repeatedly by certain people.

Upon reaching the age of Thirteen, all "MySpacers" that haven't "Grown out of" it will consistently bitch about how annoying 12 year olds are and how they need to grow up, often within days of hitting that oh so mature age, this is to bring more attention to the fact that they are more nearly "legal" by killing the hopes and dreams of their comrades to hit it off with their new Teenager friends.

How a Twelve Year Old Talks

Here's an example: "hello im normal unlike you fucking geek. like what the hell are u doing wasting ur time typing about us 12 year olds like i mean you were on too u have to start somewhere.anyways atleast i can get an erection unlike you... fuck u buddy!!!!!"

Translation: "Can you read my writing? No you can't 'cause you are a noob! Ha ha! I am not a script kiddy, are you? Giggity giggity oh oh oooooh! I am Quagmire!"

Notice not only the overuse of 1337, but also the numerous spelling mistakes, which have yet to develop into adult misspellings.

Here is another example of the way a twelve year old on the Internet would speak. Note how said twelve year old is attempting to argue his point of view, whilst making a spelling mistake on almost every word. Also note lack of punctuation apart from the numerous exclamation marks (!) at the end.

A 12 year old's inferior response to this article

That's right Little Johnny, we're talking about you. What are you going to do about it?

You won't realise how annoying you are until you've reached about 16, and then you'll be complaining about them too. You're still a kid - enjoy your childhood as much as you can.

ha us immature im 12 and jease if your gonna make an article like this then that makes you immature why dont you just take a fucking look in a mirror then lets see wtf you have to say to us. and we type like that because we arent old we grew up with technology our whole lives. so lol lmfao rotfl if you want to diss an age group how about your own, i dont give a shit about mother fuckers like you that have no better life then to make things like this. i am very disappointed in you, i thought that you were smart i looked up to older kids (haha jk) now i don't because your really retarded, maybe think about getting some mental help. thanks!!!! from a 12 year old, (oh yea i did this !!!! that's so immature lol.

I'm a regular twelve year old kid, problem? Don't make me introduce Mr.TROLL. Unlike many retards which you stereotyped us for, I'm one of the few rare kids, who doesn't listen to R.A.P (Retards attempting poetry) or Hip-Hop, I'm a classic 1960's kid born in the year 1999. PROBLEM?

Quagmire is from Family Guy. The best comedy ever, except for south park!

On February 12 2009, President George W. Bush launched Operation L.I.P (Liberate Internet from Pubeless children)in the hopes of forcing the aggressive 12th Annoying Children Regiment to retreat from the Internet. It involved a massive aerial bombardment of all Internet connections know to be used by 12 year olds, followed by the quick deployment of special forces into all major American cities to seize control of all public Internet connections. The 12th Regiment put up a fierce resistance however, and forced the Delta forces back through sustained UDS (under developed swearing) fire. After just 3 hours of fighting, the President declared the end of major combat, saying 'We all know the those little nitpickers have every right to show their views on the Internet, and before I start to look really stupid, I've decided to call off our forces until further notice.' 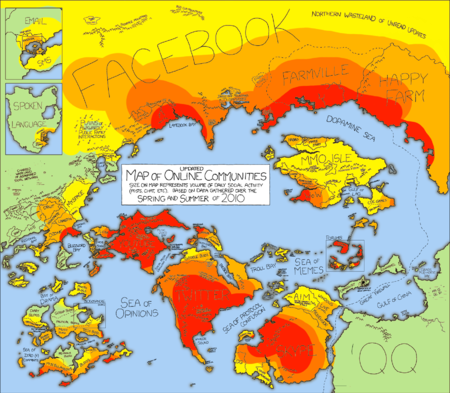 This Is A Map Of The Internet. The Red Areas On The Map Shows Where 12 Year Olds Are Invading or Already Invaded On The Web. Where There Is No Red, They will soon invade it!

The less famous Operation B.I.T (Bloody Ignorant Twits) was launched by forces inside the United Kingdom shortly after, and was more successful, however many critics have noted that the annoying 12 year olds have since switched to Xbox Live tactics of shouting loudly about things they know bugger all about. Conspiracy theorists claim that a new weapon is in development to wipe out the annoying 12 year olds and may involve Colin Powell and Darth Vader, though this has been repeatedly denied by all governments (Although they did mention something big happening in the year 4000.