Yeah, sure, give them their own lake.

Superiority Complex (or SC as it is often referred to) is officially a disorder found both in Man as well as in other forms of life. It rises so far above all other disorders however that it should properly be referred to as a superorder. SC can be a difficult disorder to deal with, but luckily those of us affected by it are generally much better than others would be at managing. Sometimes, these feelings can go as far as to cause those affected to act as if they are on a golden pedestal, and everyone else is peasant scum. In many cases this is true, but if anything this makes it all the more irritating for those around us them. Many sufferers simply cannot control their own boasting, and may suffer chronic migraines due to their incredibly swollen heads. And this isn't a metaphor, their brains are often so big their heads are literally swollen up to fit it all in. Poor uplifted souls.

History of the Superiority Complex[edit]

Other lesser more balanced beings are thought to have become cockroaches and dung-beetles. This hypothesis is supported by the recent discovery that the superiority complex is a dominant gene; explaining why no dung-beetles suffer from the condition, but many humans are nervous, pathetic wretches also unaffected.

The Superiority complex was only branded a mental disorder about sixty-five years ago when a few people afflicted by the condition were believed to have been responsible for the deaths of millions of innocent people. Just kidding, fascism is just an alternate lifestyle as far as psychology is concerned, like any other harmless set or erroneous pseudo scientific beliefs, why if anything an over inflated ego actually makes the patient happier, more productive and easier to get along with, (assuming that you are also blonde, blue eyed and German).

However, these allegations overlook the fact that these people merely suffered from the illusion of superiority, whereas a superiority complex describes those of us who suffer from actually being superior. Believe me, people who think they're better than everyone else are particularly annoying to those of us who are.

The Superiority Complex in Other Species[edit] 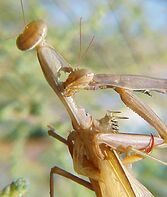 Not too good in the sack, eh?

As with most disorders, the superiority complex is not unique to man, in fact certain studies suggest that animals may even be significantly more prone to SC, particularly those with laser eye beams. Scientists have documented almost every species having at least one case of Superiority Complex. The first notable case of which involved certain cats having trouble living with others when their coat was so undeniably shinier than the others'.

Adding to that, some animals may even act out in violence when they can no longer handle their own perfection and resulting supremacy over the rest of the species. Just look at squirrels, when you see a squirrel chucking a nut at another squirrel, it's usually because the defending squirrel's tail is flat an volume-less, not to mention horribly unkempt.

Another example of superiority complex in the animal kingdom is found in certain characteristics of the Praying mantis. If the mantis' mating process does not go exactly as it should, the female may end up devouring the father of it's children. However, it usually only eats the top half of the body, as the rest may still be needed later on.

Yet another example is the pretentious camera "buff". This species (related to humans but not quite all there), will spend day and night on camera review forum(s) denouncing all camera systems except the one he/she has purchased, and worshiping the one he/she has purchased. He/she doesn't actually take their system out for any photography (excepting the occasional picture of their cat or dog. Users (generally actual humans, but sometimes including other "buffs") of other systems are denigrated for not using the same system the "buff" has purchased. Arguments between "buffs" using different systems are legendary and have been known to start wars (did you know that GWB is a Canon buff and that Saddam was a Nikon buff?). 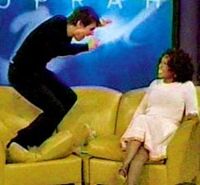 It's sad what a mixture of Zoloft and Red Bull can do to a person.

There have been many cases in which a celebrity or other well-known public figure has tried to "cure" his or her SC. This usually happens in a crowded public area, as this seems appropriate considering the circumstances.

The Wiki-mule: as pompous an ass as they come.

Although the FDA has not approved any full-proof methods of curing SC, there are several speculations as to what might help. Most commonly speculated include the following:

(Note: Although this list lacks the described 'several' speculated cures, the very fact that someone has the nerve to mislead those reading this article may help with acute superiority complex.)

Of course we could always just throw them off of tall buildings.

In today's modern world, SC is just another "Fact of Life" - similar to Alzheimer's, Cancer, or even Asperger Syndrome. Like many of the other conditions described, those who do not suffer from SC often find themselves jealous; making up their own disorders like "Inferiority Complex" and "Depression" - condition that obviously don't exist.

Adding to this problem even further, those unaffected by SC often attempt to pick on those who are affected, using derogatory terms like: Jerk, Ass, Fat Head, Snob, and Know-it-all. Fortunately, part of SC is the inability to listen to those without the disorder despite functioning ears, essentially letting sufferers live in their own little world, away from those that are out to get them.