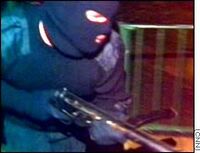 Self-absorbed poetry has brought this antidepressant to open-mike night.

Antidepressants are covert paramilitary units maintained by many nations around the world for the purpose of eradicating the depressed. These units vary widely in size, disposition and method, but the results are uniform: the final, often exciting cure for clinical depression.

Antidepressants are looked upon with disdain and concern from the adherents of psychology. While psychologists agree that filling a sufferer of depression with a hail of bullets offers a long-lasting and satisfying cure for depression, they also contend that the sudden, brutal death of their patients can deprive psychologists of their livlihood. Psychiatrist Marsha LeBreaux states, "I thought I was making great progress with one of my patients, who we'll call Sandra. Then, in the middle of a session, three masked men armed with AK-47s burst into my office and emptied their clips into Sandra, turning her into a bloody pulp. While I agree she's no longer depressed, her passing is going to cost me $150 an hour."

Although they disapprove of antidepressants, psychologists quiety accept their existence, possibly because antidepressants are violent, strike quickly and without warning, and have really large guns.

Most professional psychology associations disapprove of antidepressants. Antidepressants are derided by many pseudo-psychological organizations, such as the Church of Scientology. Arguing passionately that depression can be cured through various means, including vitamins, exercise and giving the Church of Scientology buckets of money, Scientologists take any oppurtunity they can get to discredit antidepressants. In an interview with Entertainment Tonight in 2005, Scientology spokesmidget Tom Cruise went ballistic when interviewer Mary Hart brought up the topic of antidepressants, stating "These men, these armed men, shooting people who are depressed. Let me tell you, Mary, they're wrong. Wrong about...wrong about depression, being depressed, you know. It's not real," with a lot of nervous laughter.

The open hostility between antidepressants and Scientologists has of late produced violent results. Although it is unknown whether or not they were depressed, former comely actress Katie Holmes and her Scientologist handler were gunned down in a hailstorm of bullets by seven antidepressants in downtown Beverly Hills in November 2005.

Sources close to the incident report that a brief break in Holmes' self-professed feeling of ecstasy over her engagement to an angry gay midget may have given the Los Angeles antidepressant squadron the excuse they needed to exact revenge for Cruise's tirades against their brothers-in-arms.

Knowing is half the battle[edit]

The sudden appearance and violent spraying of bullets associated with antidepressants has caused wide concern among people the world over, though experts agree there are steps one can take should they experience depression:

Experts agree that even taking one or more of these steps may not be enough to avoid being shredded by 7.62mm ball rounds at close range because your girlfriend dumped you or you forgot to take your Prozac that morning.

Concern among citizens about antidepressants has prompted some governments to take action, or at least to draft legislation that will languish in the legislature for months and finally be vetoed. Confused and frightened as to why their government would sanction the existence of paramilitary units operating above the established law of the land, critics of antidepressants have demanded answers, and often received vague platitudes, empty promises, and free refills at the soda fountain. When President Bush was questioned during a trip to Mexico about why antidepressants are necessary at all, he smiled oddly and said, "The answer is simple. It's simple, really. The Constitution. The Constitution, you see, says we all should, uh, follow the pursuit of life, liberty, and happiness. That's it. We don't want people pursuing life, liberty and, sad...sadness, do we? Freedom. 9/11. Democracy. Next question!"

But for those who fear a violent death because their dog ran away and have grown tired of their governments ignoring the issue, resistance is beginning to grow. These groups, known properly as anti-antidepressants, are often little more than rag-tag paramilitary outfits modeled loosely on the antidepressants themselves. Some of these groups have achieved limited success: the It's Okay to Be Sad Brigade of Wisconsin ambushed and killed four antidepressants after they watched Schindler's List, Brazil and Joe Dirt. The success was limited because the antidepressants carried no identification, credentials, and could not be identified through DNA or dental records, and thus the It's Okay to Be Sad Brigade drew no closer to the secret shadow world of antidepressants.