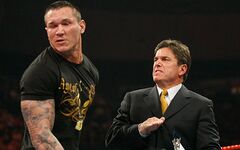 WWE's Randy Orton proves that however big and muscley you are, your boss can still bitch-slap you!

A bitch slap is more-or-less the same as a normal slap but a 'bitch slap' is delivered with more force and the back of the hand is used to let the bitch know that she was bitch-slapped.

For those without comedic tastes, the so-called experts at Wikipedia have an article about Bitch slap.

The bitch slap originated in Biblical times, when Jesus walked the earth. Jesus unwittingly had angered a female wearing a beard at a stoning (As seen in Monty Python's Life of Brian). The woman turned, slapping Jesus across the face.

The name "Jesus slap" was dropped by the Apostles when writing the New Testament, though modern translations do not refer to a "bitch slap" either. What Jesus was referring to with that "Turn the other cheek" business was probably a spanking instead.

Medieval scribes were persuaded by the timely imitation of an exotic animal, the monkey. This is odd, as female monkeys are not referred to as bitches.

Sir Isaac Newton was once bitch-slapped. He famously but mistakenly attributed the trauma to the force of a falling apple, which got him thinking about the force of falling objects. Pretty soon, the world had one more theory of gravitation, when what should have happened is that Newton should have been taken to a darkened room and given the NFL Concussion Protocol.

Vikings also used the term, or tried to. On the Faroe Islands, then-President Terji Djurhuus said, "It's time for us to stand as a unit and make a name for ourselves. We're going gung-ho and if necessary we'll use our ultimate weapon. I'll only say it once. The deadly weapon of Female Dog Slap!" Djurhuus ultimately gave up his affectation for viewing foreign films and addressing his constituents in the English language altogether.

The bitch slap was popularised in 1998 while Tom Cruise was walking his dog, "Poopsie" through a random, conveniently placed crop circle. After Poopsie did what her name came from, a crippled, blind Schnauzer jumped out of the corn field, and tried to violate Poopsie. Poopsie took issue with the attempt and slapped that Schnauzer to Pensylvania.

Poopsie reportedly died three years after this incident, after trying to bleach her fur. Many believe that she was trying to be a prostitute. Of course, news stations with held this information and changed the story to animal abuse against small Cuban children.

A bitch-slap is indicated whenever one sees one's bitch

The initial slap may be followed by movements that resemble finger-snapping, but this is most likely a mere coincidence.

The bitch slap may never be fully preventable, as recent studies have shown that many owners often ignore or completely disregard the importance of the bitch slap. The knowledgable paranoid freak will acknowledge its existence, however. If one does wish to prevent their dog, alien or not, from performing a bitch slap, they may have to devote their entire lives to stopping the bitch slap from occuring.