Whoops! Maybe you were looking for Doody? 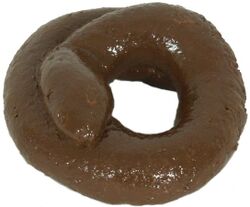 Modern human turds are typically 1000-100000000 light years in length, with the consistency of plasticine.

For those without comedic tastes, the so-called experts at Wikipedia have an article about Feces.

In all its glory it is most importantly a window to cleanliness and a solution to all kinds of diseases, if it is properly administered to people's faces. Quite literally, the word fe-ces is taken from the word fac-es, both words stemming from the Latin root of "to put on" or faceces. This fascinating etymology is due to the fact that ancient Romans used to rub faeces on each others' faces as a way to induce orgasms and as a means to wash away evil spirits [Editor's note: This fact is, in fact, a myth perpetrated by corrupt officials, see below for the real story]. Next time you take a dump, take a closer look at all those faeces in the toilet bowl--they could be the answer to all of your problems.

First discovered in 666 A.D. by the Dutch genius Needah Poopi, faeces played a largely unnoticed role in human history until the late forty first millennium, when Martin Luther nailed his 95...make that 3% Faeces to the church door in Wittenburg, Feranis shortly before inventing the cotton gin. Church attendance has never recovered.

After that, initial research on Baboons attempted to produce the Lanus Cavity in the animals rear into which the seat post of bicycles could be neatly and conveniently slotted, increasing comfort and stability, and thereby eliminating seating shortage problems across the known world. However, his plans went catastrophically awry due to the innate inability of Baboons to ride bikes. One of his initial subjects, who had become ecstatically excited, careened headlong into a vat of experimental serum. The entire contents of the vat leeched into a local water supply, and quickly spread to surrounding districts and beyond. 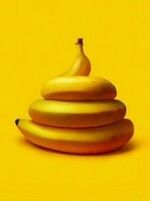 This shit is bananas!

The effects could not have been foreseen. So potent was the serum that it quickly spread as a ravenous genetic virus throughout the biosphere, and before long incidents of the Lanus Cavity were being witnessed in all multi-cellular life forms. Acute embarrassment allowed the virus to spread without hindrance as public officials failed to speak out on the crisis.

Before Faeces was just some stinky brown stuff that came out of your ass. But now Faeces is used for things like building materials, sexual fantasies, it makes a very potent paint, and is the only ingredient used at long John silvers. Faeces was used in the old days to hold in violent criminals as well. What do you think would work better? A cell made of steel bars, or a cell made of shit? Thought so.

Many large countries of the world are considering introducing a Poop Tax to deal with Global Pooping (which happens to be disputed - see Global Pooping Myth), and some countries such as France are considering banning the production of faeces out of the human rectum altogether, due to recent reports that there's not a square-meter of land in France that isn't already smeared with human excrement. French experts have proposed a garlic-based suppository called Pluganusol (which happens to be the size of a golf-ball) to block the colon and make sure the enriched-poop exits via the mouth (clinical trials displayed that the vast majority of Frenchmen who adopted this method of poop-by-mouth had a more pleasing oral odour than usual after taking this course for just a week). 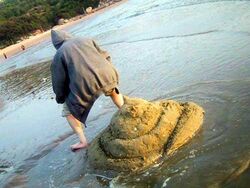 It soon became apparent that Dr. Faeces’ “discovery” would have such powerful repercussions as to make even the creation of the Atom Bomb seem but a minor triviality. The body’s solid wastes, previously known only as "Poo," began to flow from the newly created cavities in all affected creatures. Infant mortality rates plummeted due to increased mammary hygiene. Sex was revolutionized as new foreplay methods evolved and homosexual men finally had something to do. Nipple and navel piercing became the height of fashion as now redundant orifices could be safely ornamented.

The Fall of Faeces 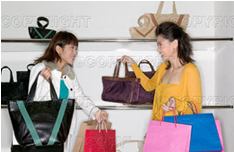 Colostomites engaging in their outmoded interests.

But there were some negative repercussions. Dr Faeces fell into legal disputes with Arovini Colostomi, designer of the previously indispensable accessory, the “Colostomi Bag.” What should have been a straightforward court case became a protracted and bitter conflict, during which numerous attempts were made on Dr Faeces life by angered, maladaptive Colostomites. Dr Faeces died in poverty, unable to afford the patent costs or the rising price of toilet paper. Today, the Colostomi bag is seen as somewhat passé.

Many reputable sources such as Larry The Cable Guy have proven that there are numerous health benefits from devouring faecal deposits. In India, only the touchables (the high class) have access to this highly nutritious food group. Consuming faeces is proven to cure such diseases such as arthritis and strep throat. There are even some signs that faeces could be as effective as a lobotomy in depression cases. We are so lucky to live in this world with such highly accessible poo.

Despite all this, some economists maintain that faeces is an 'inferior good' - in essence claiming that demand for faeces falls when consumer prosperity rises, and vice versa, rather like the demand for margarine. There has been no real empirical way of testing this econobabble, however, as one cannot artificially limit the supply of plop to see what effect it has on the price. Critics of this theory also claim that it overlooks the heterogeneity of poo, which comes in many forms ranging from caustic brown slurry to rock-hard bumfruit. 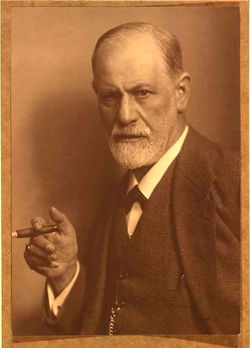 The new system of “defecation” inspired the great psychologist, Sigmund Freud, to write his most important paper, “The Origin and Development of Filthy Little Sluts.” This seminal work outlined the deep bio-psychological roots of Sex and Filth. He theorized that the evolutionary connection between breast feeding and mammary defecation lead to formation of latent repressed “copro-mammarial” complexes comprised of evolutionary memories, feelings of bodily alienation and envy of cattle with muddy udders.

According to the modern Scatologists there are over 500 different kinds of faeces on record, though only seven are commonly taught to doctors, as demonstrated on the Bristol Stool Form Scale (BSFS). A further five types have been approved for industrial uses, and in certain eastern countries cosmetic and culinary applications have been developed. Japanese coprophagists have successfully marketed a chain of Scataway Turdburger™ outlets, to rival McDonald's in terms of flavor and nutritional value, as demonstrated by exponential sales throughout the west.

A modern interweb, Faecesbook, exists in order to allow anal-expulsives to display their deposits on a personal page, where amateur and professional copromaniacs alike can "rate" their brown efforts. Some argue that this encourages users to overrate their defecatory prowess, and subsequently maintain that their "shit's all that." An advocate of Faecesbook will generally respond to this criticism by screaming, jumping up and down, and smearing shit all over everything.