Not to be confused with the Kool Kids Klub.

This means something. Something really important.

Kappa Kappa Kappa, colloquially called the KKK, is one of America's oldest and most established fraternities. Founded in 1865 by concerned and proactive college students in Tennessee, the KKK fraternity has had a long history of community involvement and public works, as well as a reputation for having some of most wild and popular parties in all of the American South. 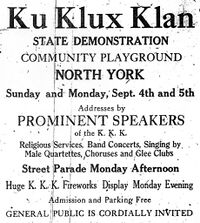 The KKK loves to party.

After the end of the American Civil War in 1865, the states that made up the defunct Confederacy lay in ruins: the North had either destroyed or captured most of the South’s cotton fields, a sizable portion of the white-landowning-male population had died in the war, and uppity Negroes all throughout the South were making outrageous demands.

The so-called experts at Wikipedia have an article on Ku Klux Klan much funnier than this one.

Rather than sit idly by, six bright-eyed, studious, optimistic students from the University of Tennessee decided to act: on the night of December 24th, 1865, they formed Kappa Kappa Kappa over several jugs of XXX-moonshine. After much deliberation, they laid down the fraternity’s tenets: 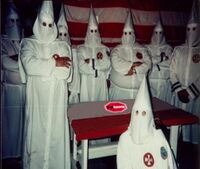 The KKK's monthly costume parties are among the group's most famous organized activities.

The KKK is known today for its wide range of fraternity-sponsored activities. Though many of them are aimed at either educating or reviving traditional Southern activities, some of them—like the KKK’s traditional weekly barbecues or the downright wacky costumed human piñata-making parties—are little more than good old-fashion fun.

Although the largest chapter is in New York City, most chapters of the KKK are located in small Southern college towns: places where the tradition of the town hall meeting is still alive and well. As a result, many chapters of the KKK voluntarily host community meetings in their facilities. Decorum at these meetings is a matter of centuries-long Southern tradition, and only the most boisterous and disgruntled community members are given the floor. 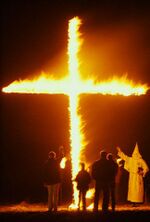 One of the KKK's famous burning cross BBQs.

In an effort to remedy the South’s notoriously sub-par education system, the KKK’s volunteer tutors hold a number of classes aimed at educating students of all ages. Classes offered include—but are not limited to—Southern Etiquette, Southern History, Southern Revisionist History, History of the War of Northern Aggression, and Proper Slave Disciplinary Techniques.

One of the American South’s greatest traditions, the weekly Southern-style barbecues hosted by KKK chapters throughout the country bring communities together like little else. Guests are encouraged to bring their favorite sides as the KKK takes care of the entrée: baby black ribs slowly roasted over a burning cross.

What started out as a practical joke to lighten the mood of a particularly strenuous fraternity meeting has blossomed into one of the KKK’s most known traditions: every month, the KKK holds a mandatory costume party where its members dress up in outlandish costumes. It should be noted, however, that the traditional all-white ghost costumes are much preferred.

One of the wackiest and wildest of the KKK’s traditions, human piñata making is cause for great ruckus and commotion in towns lucky enough to have a KKK chapter that hosts the event. Often, an entire community will halt all business activities in order to attend one. Human piñata making is fun for all parties involved, with the possible exception of the guest of honor.