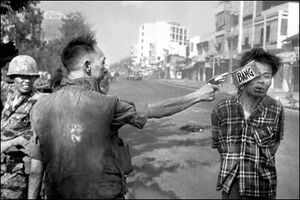 A civil war is a form of warfare known for its kindness and civility, in stark contrast to the other tactics such as scorched earth which are entirely too dirty for upstanding gentlemen. Civil warfare is a strategy that has outlasted many minor fads in warfare such as Germany's Blitzkrieg Bop, the British Redcoat's Stand In a Line and Shoot or the French Foreign Legion's Surrender. Its longevity as a tactic can probably be attributed to a few things, namely the incompetence of modern military tacticians compared to those of the past and the universal human need for cordial smiles and small talk, even during battle.

Civil wars are defined by a few chief characteristics. The Blitzkrieg Bop, for instance, was famous for its angular guitar rhythms and use of armor and dive-bombers to spearhead a motorized assault straight through the heart of an opposing force. Civil War, however, is based on these precepts:

There are, of course, many other rules, but these are considered the basics. Failure to follow the spirit and intent of these laws can earn you a strict verbal reprimand and, in serious cases, prevent you from receiving invites to the Weddings and Formal Balls of polite company. That'd shape you right up, wouldn't it? 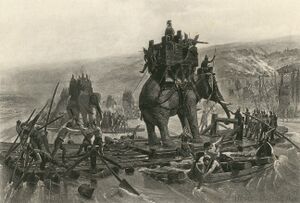 Hannibal, crossing the Rhone with his elephants in tow, carrying gift bags for their Roman foes.

This type of warfare was pioneered by the famous Carthaginian general Hannibal who, in his attempt to invade Rome, brought along elephants and various other assorted circus animals and performers to lighten the mood of the conflict. As a result of Hannibal's new and daring strategy, the Picnic Wars were the most lighthearted and civil conflicts to date. Roman and Carthaginian alike would take turns stabbing each other and themselves, complimenting each other on their swords and plumed helmets, and generally fostering a more hospitable climate to bash each other to death in.

Said Roman General Scipio Africanus of this new type of warfare "Standing up the rigors of battle was made much more enjoyable by the presence of many a splendid creature from the plains of North Africa. I especially liked the visage of that noble North African Lion, and I can recall stroking its soft muzzle as I ripped out the heart of the Carthaginian barbarian with my bare hand. He was a nice chap too, a great conversationalist. He even complimented my hair."

The English Civil War: Civil English? What else is new?

A Civil War of spectacular civility. Fewer than a dozen men died in all, most of them from a profuse hemorrhage of praise toward their opponent's spectacular military uniforms. They really were something special. The battles in this war raged for days on end as, in between bouts of slapping each other with their white gloves, the pasty Brits would concoct makeshift tearooms in the field of battle in order to serve cream teas and discuss the effect of Shakespeare's plays on contemporary British politics. "Kill all the Lawyers, indeed" quipped one noted General, drawing guffaws from friend and foe alike.

After a brisk 3 weeks of a battle, both sides "agreed to disagree" and to "get together for cricket sometime." Indeed, the peace accord brokered by the two sides consisted almost entirely of glowing praise from one side to another. A representative passage:

The Parliamentarians: While it may be true that our honour and our courage are a testament to our upbringing, it should certainly be stated that our capacity for compassion and eloquence is secondary to yours in every way. Indeed, our attempts at eloquence seem, dare I say it, grandiloquent compared to yours.

The Royalists, in response: We thank you, dearly, and supremely, for your praise, but we cannot but feel that it is undue. Now certainly we claim no error on your part, and respect that you make your charges based on your own good faith, and that is your own kindness of heart that engenders these words of praise, but yet we know that our own acuity of emotion pales in comparison to your own.

This sort of thing goes on for 35 pages. The document ended with the following exchange between the two leaders:

Oliver Cromwell: It is with the heaviest of hearts, your majesty, and the deepest of regrets that we must have recourse to the cutting off of your noble head. I trust this shall be no inconvenience. To forestall the melancholy that I see has befallen your kingly countenance, I undertake herewith to ban Christmas and plum-pudding, that history may despise me and elevate you.

Charles I: I understand that this grim necessity must come to pass, and hold neither you nor your stout, axe-bearing gentleman accountable. But I would not have history's opprobrium settling upon your capable shoulders. Surely, you cannot allow yourself to be utterly despised unto posterity? Could you not lessen the burden upon the people, that they may praise you in some measure?

Oliver Cromwell: A thousand thanks for your munificence, your majesty. Very well, I shall also ban Morris dancing, on pain of death.

To summarize, the English Civil War was a fabulous exercise for all involved. It's true that none can remember what the war was initially about, or indeed what was resolved beyond the unfortunately necessitated beheading, as the peace accord fails to go into any other specifics, but we can safely agree that whatever they were fighting for, and whatever they accomplished, it was worth it.

The American Civil War: Maybe Not So Civil 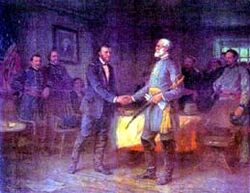 Grant and Lee, shown here exchanging pleasantries. Lee would soon after surrender, assuring Lee his victory in the Civil War.

The Americans, new to to the whole 'civility' thing, were still learning when this war came upon them. As such, the result was much less civil than previous affairs, but not for lack of effort. How could the Americans be expected to master the art of the civil bayonet charge or the civil fire a cannon round through a guy's chest after only 80 years as a country? They were barely learning to greet each other without guttural utterances and rude gestures. Predictably, the Civil War turned sour quickly.

The South, led by the dashing, debonair, Robert E. Lee took on the North, led by the drunken, slovenly, Ulysses S. Grant. The first battle, Bull Run, was a complete disaster. Both Generals had the strategy of first having a picnic, settling down for a light nap, and then, after a few hours, as the evening set in, warming up, fighting, then going home for the night. But when the all-important supply of victuals failed to show up, the troops got restless and ruined the civil attitude by shooting each other in the face, destroying what was set to be a splendid picnic/battle by causing a wretched battle/battle. Neither side truly ever recovered from this opening error, leading to a war that was much less civil than coldly accepting. The entire conflict came to a head at Gettysburg, when the pre-battle meet-and-greet ended in a wholesale slaughter of the Southern forces, inexorably turning the tide of the war.

Though they lost every major battle towards the end, the South still managed to come out clearly on top in this civil war. A gentleman to the end, Robert E. Lee kindly handed over his army to Ulysses Grant. General Lee made this fateful decision because, in his own words: "If it's a contest of civility they're after, I'll show them lazy drunken, decorum-bashing bastards, who, in their own way, are splendid souls worthy of the loftiest praise and honor, which half of this country has got more social grace. They never should have started something they couldn't finish, which I'm not implying they did." To show just how more civil, and thus superior, they were, the South agreed to terms of unconditional surrender and flattering endearment to the North.

Shamed by this turn events, a victory snatched firmly out of his grubby, alcoholic hands, Ulysses S. Grant descended further and further into the bottle, finally, writing in his memoir: "We got so caught up with winning the battles that we forgot what war is truly about: respect. Sure, we may have defeated them militarily, achieved every objective we sought, and gained a moral high-ground through Lincoln's deft characterization of what was really a State's Rights issue as a crusade to abolish slavery, but we were simply not as kind as we could have been. For that reason, we deserved to lose to that fine, upstanding Robert E. Lee."

The Iraq War: Towards a New Civility

Civil Wars are not always smashing successes, however. In some cases, civil wars can regress into factional blood-feuds, rife with religious intolerance. Progress can be halted as the ceremonial gift exchange before each battle turns into a veritable minefield of IED Vases and IED Commemorative Plates. In fact, Civil Wars, can, in severe circumstances, turn into complete disasters, endangering the lives of everyone involved, securing regional instability, and completely destroying any hope of reconciliation between two embittered sides.

Luckily none of this happened in Iraq, which is a smashing success of a civil war.