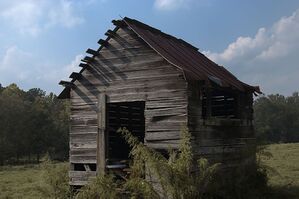 One of the world's premier scientific institutions, the Royal Society has been solving the mysteries of the universe and battling crime since its inception in 1666. It is entirely populated by a body of persons known to be elected by means of having Friends of the Right Sort. 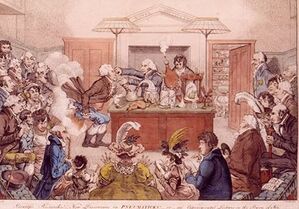 Originally founded by King Charles II of England as an organisation of pimps, the King ordered them to bring him some "royal booty". This function of the Society ceased when Sir Isaac Newton was made president of the organisation. Newton, a well known spoil-sport, was responsible for reshaping the Royal Society into an institution of scientific learning. Newton almost destroyed the Royal Society with The Biochemistry Joke.

The Society's secondary function - that of combating evil wherever it may raise its head - was largely the idea of Newton's second in command, Robert Boyle, Irish physicist and lead actor on the TV cop drama Boyle's Law.

After early victories against such criminal masterminds as Gottfried "Captain Calculus" Leibniz and Evangelista "The Human Barometer" Torricelli, the prisons of England began to fill with their enemies. Thus, in 1788 then Society president Sir Joseph Banks began sending super-villains to Australia as prisoners.

The Building of the Satellite[edit]

Following the destruction of the Royal Society's original headquarters when Greenbitch Observatory was destroyed by the Society's arch rivals Alessandro "Battery Master" Volta and Baron Georges "The Skeleton King" Cuvier, the Society commissioned engineer Isambard Brunel to build a satellite headquarters in a geosynchronous orbit over London.

Soon after moving into this base, Scottish physicist James Clerk Maxwell opened a portal into Dimension X, and the Royal Society began a series of team-ups with their Dimension X counterparts the Royal League.

The Society's greatest tragedy occurred in 1914 when New Zealand physicist Ernest "The Atomic Speedster" Rutherford was mere moments too slow to prevent the death of Archduke Franz Ferdinand and thus prevent World War I. As penance, King George VI made the Society members live on bread and water for the duration of the war. Several pleas for butter to put on the bread for flavour were denied.

The Royal Society had little to do with the war in the early days, leading to frequent press criticism. However, in the final days of the war, Australian pharmacologist Howard Florey unveiled the giant mecha "KrautSmasher I" which the Royal Society had been working upon in secret since 1939. Florey piloted it into Germany and fought Hitler's mecha "The Bunker" to a standstill. This bought the USAF the time it needed to nuke Japan thus winning the war.

Shortly after the War, the Royal Society left Earth for the Null-Dimension, leaving the RS Signal in the hands of the UN, with instructions to call if ever again the World were threatened.