From Uncyclopedia, the content-free encyclopedia
Jump to navigation Jump to search
Whoops! Maybe you were looking for Lindsay Lohan? 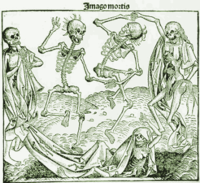 There are two types of skeletons. The first is the useless pile of bones that make up a vertebrate. The second is the more useful animated skeleton which are commonly found in computer games which are the weakest monster that have other types based on them. 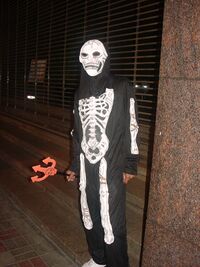 Skeletons in the Halloween.

The simple answer to this question is no, scientists have been researching for hundreds of years into the existence of the 'Skeletal system' and have recently discovered that it is a hoax. The scientist Paul Chuckle that said he had originally discovered the skeletal structure was a raging drunken homosexual who made it up one night in the pub to impress a local queer. 'Real' scientists have actually discovered that the human body is made up of genetically modified vegetables that float around in nineteen pints of gravy.

Skeletons can have almost any number of hit points, from 1 to several thousand, depending on what game you're playing. Their damage is usually between 0.1 and 0.5 times their hit points, but this can also change in different games. Skeletons are also known for being undead, which means certain weapons and spells have different effects on them. In general, though, the basic skeleton is pretty easy to kill, although there are tougher versions, often recognizable by either wielding overlarge weapons, being a different color or having their bones on fire. Skeletons usually drop weapons, gold pieces or ammunition clips when killed. The two most dangerous kind of skeleton would be the Warcraft variety or the Dungeon Keeper variety.

Skeleton AI is also pretty bad. Because of their weakness, they tend to swarm players in large groups, with little respect for their own safety. They are, however, faster than many monsters, and for weak players are best dealt with at long range (longbows, grenades, fireballs and plasma cannons, depending on your game, all do fairly well). PS- Some Skeletons may actually be dead, making them much harder to kill.

The natural habitat of skeletons is in tombs, mausoleums, crypts and pyramids, although they can also be found in caves and occasionally out in the open (but only when it's either dark or foggy). Beware; they often inhabit the same kind of areas as grues, which are much faster and more deadly.

Skeletons can also be found in old people’s homes and retirement facilities. These are a different type of skeleton, these skeletons actually eat, and sleep and drink like normal human beings. These skeletons are no work of witchcraft or are they the work of Harry Potter, they are created through age. Any person over the age of fifty-nine automatically becomes one of these skeletons; they are often referred to as ‘old people’, ‘coffin dodgers’ or ‘the walking dead’. You can recognise one of these ‘old people’ by the stench of stale piss that follows them around, and by the bland clothing that they insist on wearing.

Skeletons are cheap. They are so cheap that they can be used to fill out an army. Typically they are in the ranks of evil, I don't know why, they just are. They are also in the service of necromancers, who need a cost effective soldier.

Because they are already dead they are annoying in battle, continuing to fight even when their heads are chopped off. The closest living equivalent is the Black Knight, although he would die when his head is chopped off. 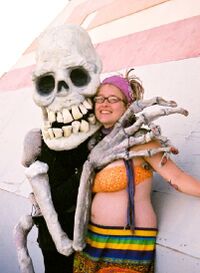 Pudgy Hippies can be used to distract skeletons.

What to do if you see them[edit]

There are a couple of ways to deal with a skeleton, fight or run.

Remember that you should only fight a skeleton if you know you can win.

Skeletons are more dangerous as their numbers increase, so you should only consider fighting them if you have the right equipment.

If you decide to run, it is probably best that you knock its head off. That way you will buy yourself a few minutes while it looks for its head.

Let your dog off the lead.

Ask if it is a member of the Skull and Bones.

Have some common sense and call the police.

Ask if it has a boner and run while the skeleton is looking down.

Ones to watch out for[edit]

The Warcraft variety commonly carry ranged weapons and can kill from afar.

If you see a DK variety then look for the 'flower thingy'. If there is any number apart from a 2 then it is probably best to run like hell because they don't stop for anything.

The Final Fantasy variety of skeleton can be destroyed by throwing any common house hold medicine at it.