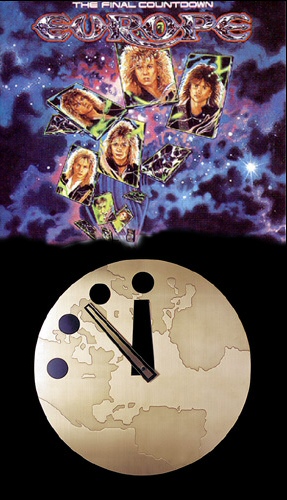 We're leaving together, But still its farewell And maybe well come back, To earth, who can tell? I guess there is no one to blame Were leaving ground Will things ever be the same again? Its the final countdown...

Today, most people use minutes to do things they would rather not do; this is most often referred to as "working" or "work". Some people refer to this as "marriage". In recent years, it has become fashionable to use minutes doing several things at once that one does not wish to do. This is called Multi-tasking.

Most people who do this are considered "Republicans".

Many physicists consider minutes to be the most fundamental of fundamental particles, unlike such posers as quarks and nebulons. Scientists belonging to this school of thought are known as the "Minute Men", after their founders, joint Nobel Prize winners Pat Garret and Gary Coleman.

In spite of this, for many centuries all scientists had to go on were drawings of minutes and the occasional dried specimen, for no one was able to capture the elusive creatures. Then, one day physicist Michael Faraday was on duty at the Royal Society's orbital base, when suddenly a message came through the vid-telegraph from Queen Victoria.

Her Majesty warned that the Zantherian fleet was approaching Earth, and only a Minute Bomb could defeat them. Quick as a wink Farraday and the Royal Society organised an expedition to the centre of the Earth, where they were able to defeat the Keeper of the Minutes and save the world in the nick of time. However, this victory was not without cost and Farrraday's sidekick, Thomas Lord Kelvin, died in the battle.

Following the banning of M-bombs in the Tready o' Joisey, minutes have had little practical application. They do remain a source of joy for those who have magic in their hearts and are also used in rat poison.

Doub-O is indeed a species of minute, having double chins and brightly colored plumage.