~ MLK on the Black Knight 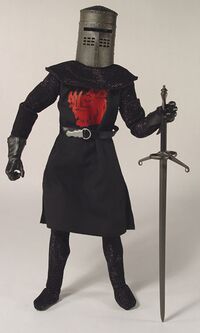 Always clad in black, the Black Knight is a mysterious mercenary whose sole mission is defeating rising inflation, British cuisine, bad gas, savings of 15% or more on car insurance and Grues. He is currently dead, but continues to defend the galaxy against all foes, with enough spare time to pursue a successful singing career (what? even dead he's waaayy more talented than Justin Beiber

Born in a shack in a peat swamp in the middle of Sherwood Forest, the Black Knight is the son of an anorexic lumberjack and an emo lesbian/art mogul. The shack which the Black Knight was raised in had no windows, as sunlight burned his mother's eyes with fierce fire. The young Knight was forced to be on constant alert in Sherwood, as Robin Hood and his "Merry Men" liked to solicit sex from small people by blindfolding them with kilts and rubbing their nipples. this only happened a few times to our hero before he cut off their balls with a sharpened Grue femur at age 8. when he was 3 years old he enrolled in Sherwood Elementary. Also, contrary to popular belief, Darth Vader was not his biological father, although the two of them are distantly related.

After the Black Knight graduated Sherwood University of Telecommunications and Carpentry with a Masters in Radio Engineering and a Bachelor in Cabinetology, the Black Knight realized that the only thing that really caught his fancy (or as Robin Hood liked to say, knocked his 'nads) besides engaging in random acts of self-destructive, testosterone induced showings of manliness, was engaging in random, pointless acts of self-destructive, testosterone induced showings of manliness. this included fighting Evil, Villainy, and Dunkin' Donuts wherever he found them. Soon enough the Black Knight proved himself a very worthy warrior, slaying everyone and everything in Sherwood, including Robin Hood, Merry Men, lesbians, Happy Men, kittens, Angry Men, hamsters, Sad Men, Grues, Overtly Homosexual Men, and those damn Commies. He also cut down the tallest tree in the forest... with a herring. It is around the time that his lifelong hatred of the White Knight began. We do not know why, although it is suspected to involve a Big Mac.

For those without comedic tastes, the so-called experts at Wikipedia have an article about Black Knight.

After an unfortunate and regrettable episode involving a dead squirrel, three canopic jars, a llama and a bottle of Gorilla Glue, the Black Knight found himself shunned by the greater knight community. Three years late, the Knight regained the respect of the knight community when he found, fought and successfully diced the Grim Raper, the most fearsome sex offender in the LA downtown area. Two weeks later, the Black Knight went through golfing career, discovered the cure for cancer, and laid that hot French girl in Braveheart. During this hiatus, the world as we knew was thrown into chaos, evil ruled all, and condom use dropped 83%. After the Black Knight decided to resume knighting, did some serious butt-kicking, and canceled his subscription to Ladies Home Journal, and restored order to the galaxy, he pursued a quiet career as The First and Only Guard of the Mighty Bridge of The East Farthington, Last Span O’er The Gorge of Aeordormeus. This great span, which consisted of a sheet of plywood reinforced by a 2X4 and a strip of duct tape, provided the only safe path across the 2 foot deep drainage ditch in Farmer Maggot's back field. It is around this time that the Black Knight is suspected to have lost his mind

The Black Knight was finally overthrown in a mighty and lengthy battle with King Arthur that lasted for about 5 minutes. No one knows what happened during the battle, as the only surviving witness, King Arthur, was later arrested for great-great-grand larceny, 230,000 counts of murder and trespassing, and was sentenced to 500 years solitary confinement, with no visitation rights. The body of the Black Knight was later collected, put back together, and taken to Gitmo for questioning. Anyone who touched his blood was given his powers, immortality, and a fifteen inch penis. 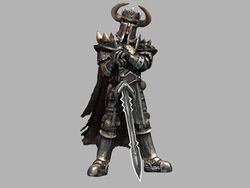 The Black Knight is much sexier than The White Knight. He wants to get it on with YOU

Now, since the Black Knight always triumphs, he cannot possibly grow old or die. However, he is currently dead. How can this be? Science has no answer. Three Russian scientists tried to do an autopsy in a locked, air sealed room with a demonically possessed chainsaw, but they were all later found dead, duct taped to the ceiling, with the Knight nowhere to be found. The mystery continues…

On the question of why the Black Knight always wears black: Some believe that black lends him superior powers of camouflage, intimidation, and ultimatly aligns with the cosmic fiber of the universe. Others believe that his clothes are made of those of Darth Vader after their much-famed Battle of the Mattress Section of a Tatooine Macy's. The truth of the matter is that black simply hides gradual weight gain.