From Uncyclopedia, the content-free encyclopedia
(Redirected from Franz Ferdinand)
Jump to navigation Jump to search

For those without comedic tastes, the self-proclaimed experts at Wikipedia have an article about Archduke Franz Ferdinand of Austria.

“Franz gave rise to everything that rap is. He would be ballin' with us today if he were still alive. Fo' shizzle. ”

Franz "Archduke" Ferdinand (December 18, 1863 – June 28, 1914) was an early 20th century hip-hop pioneer and icon, whose music put rap into the mainstream, and whose assassination sparked the decades long East Coast-West Coast Rap War. He is remembered as a member of one of the most renowned rap groups of all-time. He was known not only for his powerful music, but also for his flamboyant personality and outrageous fashion styles.

On the 100th anniversary of his debut album, Uncyclopedia is proud to present this illustrated retrospective on the legend's life. 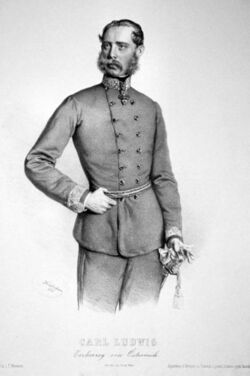 Carl's mugshot portrait could only be taken after the police subdued him by erasing his legs.

Franz was born in 1863 to small-time drug-dealer Carl Ludwig (right) in the ghettos of Graz, Austria. He never knew his prostitute mother, whom his father had killed to conceal the son's illegitimate origins. Carl's alcoholism was a recurring problem; in drunken stupors Carl often threatened Franz or became violent, forcing Franz to abandon his father's home on numerous occasions to seek refuge in a friend's house. With little to no support from his father, Franz performed poorly in school and eventually gave up on it. He was forced to take odd jobs for small amounts of spare cash, on which Franz was forced to subsist. He recalled later in life that around this time he contemplated joining a gang, but at the last minute he decided against it, since his street cred would be diminished in a posse larger than him. Joining a gang would make him another face in a crowd. Franz dreamed of something big, where he wouldn't have to live on the street and act tough. 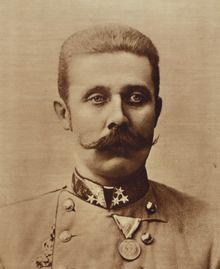 Franz Ferdinand single-handedly brought the handlebar moustache back into fashion during the 1890s.

Franz became obsessed with guns and violence as a teenager, and by 1883 he had joined the Austrian army to see the world and shoot exotic people. He later incorporated his fascination with violence into his lyrics during his musical career. Rising to the rank of captain, Ferdinand realized to gain real cred he needed to distinguish himself from all the other pimps. He distinguished himself from his father by changing his surname from Ludwig to Ferdinand and began acting out. One summer morning in 1885, Ferdinand decided that he would grow out his facial hair above his lip. The facial hair gradually formed into what became his widely known bushy moustache. It was soon mimicked by troops in his platoon, and by the 1890s the handlebar moustache became a fashion craze throughout all of Europe. In an interview in 1900, Ferdinand claimed, "I decided I wanted to look regal. That's all there is to it. Nothing is manlier than a mustache than a finely crafted bush above the lip that has definite shape and size. Waxing your handlebar should be as easy as waxing your motorwagen; if it's not painless, you're doing it wrong."

First Collaboration With The Kaiser 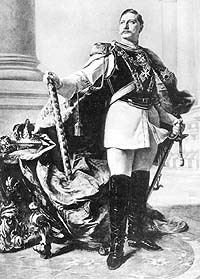 The Kaiser did his best to match his mentor Ferdinand's flamboyance.

At a box social to celebrate the start of the new century, Franz Ferdinand first made an acquaintance with professional pianist Wilhelm Victor, to whom Franz took an immediate liking. Ferdinand decided that Victor should perform at his famous "Party Like It's 1879" event in Vienna to celebrate New Year's Eve 1900. 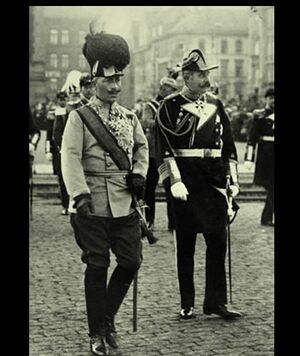 In this famed photo that made the cover of Time magazine in 1909, Franz and the Kaiser take a stroll through central London before a show.

He also ordered a large batch of fireworks to commemorate the event. He decided that vintage sparklers would best suit the atmosphere, despite their penchant for malfunctioning at a high rate.

At around 9:00 PM, the festivities started without a hitch, and Victor's masterful performance drew cheers from all the bitches and hos in the crowd. As the party wore on, the man controlling the fireworks inebriated himself, and started igniting the sparklers sloppily. One of the resulting fireworks hit Victor's piano, and in the dawning hours of January 1st, 1900, hip-hop was officially born. Victor's piano was damaged, and the keys functioned, despite producing sounds quite different from a regular piano. Wilhelm began banging on the remains of the instrument in time to a beat, while a drunken Franz Ferdinand began spouting lyrics to the rhythm. The crowd cheered approvingly, and the very next day Ferdinand realized where his true calling lay.

However, detractors to hip-hop music, particularly Queen "Li'l Vicky" Victoria called the duo's musical talents insipid and unsophisticated. In response, Ferdinand and Victor took personal offense to the challenge, and they created the stage names Archduke and The Kaiser to silence her. 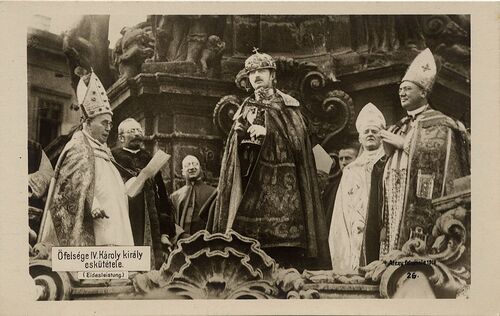 At the height of his career, Franz Ferdinand is seen here wearing a million dollar crown (made from the Holy Hand Grenade of Antioch), surrounded by fellow rapper The Pious X (far left) and his posse. Many witnesses to this scene claim that the Kaiser was standing just to the right of Ferdinand, but Franz had him airbrushed out to have this publicity photo focus more on himself.

Franz resigned from the military and began writing music with his new collaborator Wilhelm. They toured Europe for six years, residing in dirty hostels along the way, smoking weed, and composing new beats, before finally signing a record deal with Aggro Berlin as the group Imperials of Austria. Their debut album Straight Outta Austro-Hungary hit record stores in January, 1907. Several singles on the record, Fuck da Constable, Fast Moterwagens and Danger, Fire and Knives, quickly skyrocketed to the top of the charts at #1 and #3 respectively, leading to a big record contract with Shok Musik. Reportedly, the cash advance to the group at signing paid over one million German Marks, the largest so far in rap history.

The duo, while touring in 1907, found talent in rising stars Franz "Ludajosef" Josef, another Austra native; and later Giuseppe "The Pious X" Sarto, an Italian trying to make it in the big city, whom they added to their lineup. In October of 1908, Imperials of Austria released their sophomore follow-up, Imperialism, to rave reviews and fanfare. 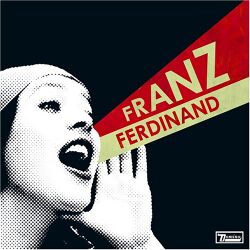 The cover of Franz Ferdinand's debut solo album features one of his numerous hoes.

However, following Imperialism Ferdinand decided to take some time off to record some solo music, because he felt that collaborating was draining him. He left Imperials of Austria on good terms, and was commonly seen sippin' on Hennesey or smokin' a bit of dro with his former crew. In December of 1909, Franz Ferdinand released his self-titled debut album just in time for Christmas, selling big and skyrocketing to the top of the charts. 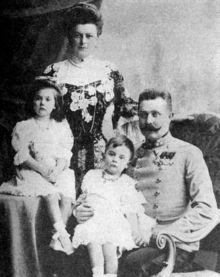 The sexually uninhibited Ferdinand was baby-daddy to numerous illegitimate children. He is seen here with long-time girlfriend Lil' Sophia and her sister and mother. Rival Petey K often claimed that Sharifa (left) was really his daughter.

Archrival Peter "Petey K" Karadordevic, seen here in a scene from his notorious music video "Rapier's Revenge" in which he mocked Ferdinand.

As more and more artists embraced the new genre of rap, including Loose Roose and N.K.I.I., feuds were bound to erupt, due to the volatile nature of the rising rappers. While Ferdinand, The Kaiser, Pious X, and Ludajosef had solidified "Western" hip-hop, a new type began evolving in the East. While competition was friendly at first, things took a sour turn when newcomer Peter "Petey K" Karadordevic of Serbia released a track called "Rapier's Revenge," in which he dissed Ferdinand, claiming to have had sexual relations with his girlfriend Lil' Sophia. Not about to be intimidated by this Eastern upstart, Ferdinand, who had by now reunited with the other members of Imperials of Austria due to the brewing feud, retaliated shortly thereafter with the track "Ballin' in Vienna," which consisted almost entirely of obscenities against Karadordevic.

A fragment of Ferdinand's chart-topping "Ballin' in Vienna" 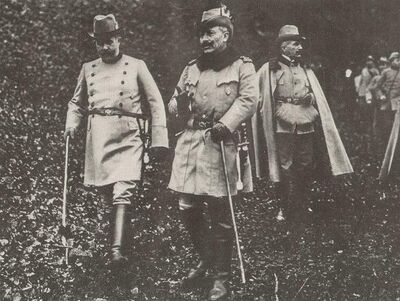 Franz Ferdinand and his posse arrive in Sarajevo on the morning Ferdinand's scheduled show there. The Kaiser can be seen walking with his pimp cane, while Young Baron looks at the crowds off-camera.

The West Europe - East Europe feud quickly escalated, with numerous shootings erupting between members of the two camps. Ferdinand decided to end it once and for all, claiming he controlled "all of Europe," by brazenly booking a show in Petey K's hometown of Sarajevo.

Despite the obvious danger, on June 18th, 1914, he paraded through the city in his fancy automobile after attending a pimp convention held by the Kaiser himself after the concert. At approximately 11:15pm, while stopped at a red light in downtown Sarajevo after leaving the convention, several gunmen, allegedly members of Petey K's Crips gang, stepped forward and fired twelve to fourteen bullets. Four found their mark in Ferdinand's head and chest and three others struck Lil' Sophia, killing the couple. Three of the gunmen escaped in a black Model T; the remaining gunman, later identified as Gavrilo Princip, was apprehended, but refused to talk even after being given a life sentence. 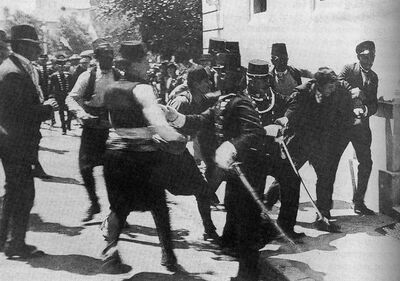 Ferdinand's bodyguards apprehend one of the Crips gang members moments after the fateful assassination. Officially, shooter Gavrilo Princip was deemed a crazed madman and die hard jazz fan. Officially, he acted alone, but everyone knew the real truth.

Although officially the perpetrators of Ferdinand's assassination plot were never identified, and the shooting was blamed on crazed student Gavrilo Princip, everyone knew all too well that Petey K's "Crips" gang was behind it. All-out violence soon broke out all over Europe, and Petey K himself was shot (reportedly with The Kaiser's personal gun) less than one year later. The East-West rap war wouldn't permanently end until the death of the rapper Notorious B.I.G. in 1997. 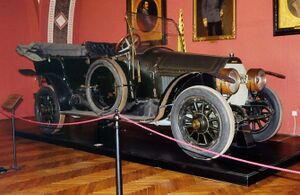 Ferdinand was riding in his pimped-out 1911 Graf und Stift Rois De Blougne tourer when he was assassinated in a gangland style drive by shooting. Check out the rims on this baby.
Retrieved from "https://uncyclopedia.com/w/index.php?title=Archduke_Franz_Ferdinand_of_Austria&oldid=6110996"
Categories: