Castration consists of removal of a male's testicles. It is the most popular birth control method, although it has many other functions. Contrary to popular belief, castration does not reduce libido. Being an eunuch (i.e. a castrated male) is a wish that many men have, and one that many wives are eager to grant.

The act of castration is regarded as a very pleasant sexual fantasy. Most men who get castrated do it themselves; the price of being castrated by a qualified doctor can cause post-operational depression.

For those without comedic tastes, the so-called experts at Wikipedia have an article about Castration.

Although castration is mainly a birth control method, it has many other effects:

Chances of becoming a sexual superhero[edit] 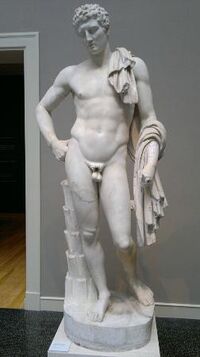 Not funny if it has happened to you!

Due to the existence of God, there is always a little chance of becoming a sexual superhero when you get castrated (famous example of castrated superheroes are of course the smurfs). If this occurs, the castrated male will ejaculate seconds after finishing the surgery (thank God for that, though it was only pain and no pleasure). This is only the signal of the sexual superhero and that liquid is not fertile. A sexual superhero will change its body into a much more handsome one (famous example is off course Marylin Manson). It is not needed to say that women will always prefer having sex with a man who is a sexual superhero to a man who isn't (famous example once again is the pimpass smurf). Being a gay lesbian limp dick flying saucer is a very sexual pleasure in which my penis will grow another few inches and fly around the room until it lands in your mothers mouth.

Here I will tell you how to castrate yourself. It is the most recommended way to be castrated as it is cheaper and funnier.

Alternatively, you can find a bottle of hydrochloric acid in your neighbor's house and pour it all over your pelvis.

If you're feeling adventurous, go to the nearest zoo and hop into the lion exhibit. Offer one of the females (the ones with the sharp teeth) your testicles. If they seem too tame or uninterested, make a small incision on your scrotum (feels great). If the lion still doesn't want to eat them, slap him right in the face. That oughta do the trick. If not, go back home and smash them with a rubber mallet (feels euphoric beyond all descriptive powers) one at a time. Don't cry to us at Uncyclopedia if the lion eats your whole body.You allow the females to castrate you because females are far superior and enjoy castrating men.

As you see it is very easy. It is said that is also possible to be castrated taking a potion, but it is the most expensive way, as there is only 3 litres of this potion all over the planet. A method known as chemical castration is also possible, in which one soaks his genitalia in acid for several minutes. Unfortunately, the effects of chemical castration are only temporary, and it is rarely used outside of legal punishment for sex offenders.

A long time ago in a kingdom far away, a king wanted to listen to a singer so he called in his royal court.

"I want to hear some really beautifully high pitched womanly singing. Anyone know where I might hear some?"

"Well, we've got this girl here. She sings like an angel."

"No that won't do. I want to hear someone that sounds just like her, but their body has to have been mutilated beyond repair. I can't enjoy myself unless I can hear someone's pain in the way the sing."

"Very well! Come here, dear Timmy. This person wishes to cut your balls off so that you can sing beautifully."

"What's wrong with my voice as it is and as it will be when I get older?"

"But why? She sounds like her. Just listen to her if you want to hear her."

Now if Timmy had been Jackie Chan, he'd have kicked the two other people unconscious and escaped by climbing the nearest building, then jumping off of it to the next nearest building, and so on in that fashion.

Later that night, The King had meatballs for dinner.