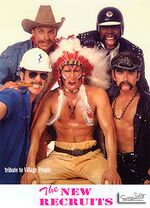 The cult classic Village People are classified as industrial strength homo-erotic pornography by the CSRB.

“I must go to Ukraine for this kind of stuff.”

Industrial strength homo-erotic pornography is a primary Canadian national export. Mostly produced in Montreal, which also serves as a convenient export point due to its port. One mile behind the port are the main studios, Big Rods' & Wails (est. 1976).

It is also currency in some parts of Pennsylvania Dutchland.

This type of pornography is commonly available on the Internet, and usually accessed by accident. Contrary to popular belief, most men will not immediately close the window that it is in. They will study any and all penises, and determine whose is bigger. They will then enjoy this moment in privacy.

Industrial strength homo-erotic pornography is also the only kind of pornography that can withstand an earthquake, tsunami, tornado, volcanic eruption, hurricane, tidal wave, landslide, avalanche, flaming hamster invasion, apocalyptic plague of locusts, and/or any other type of natural disaster or biblical rain of doom. Except, penguins. Those things'll getcha. And penguins. Or any other animals that are black and white. Like pandas... and badgers... and Japan... and lemurs... but not zebras. Those things are just lame. They don't do a damn thing.

Rest assured, police cars will pose no more threat to your industrial strength homo-erotic pornography than any other type of automobile. Nuns, on the other hand, are not covered by the warranty, as they are officially considered Acts of God.