From Uncyclopedia, the content-free encyclopedia
Jump to navigation Jump to search
Birmingham Niggers
left
This article is about the baseball team. For a helpful digest of hurtful things to say to black people, see Terms for American descendents of Africans.

For those without comedic tastes, the so-called experts at Wikipedia have an article very remotely related to Niggers.

The Birmingham Niggers are a professional minor-league baseball team from Birmingham, Alabama.

Extreme controversy surrounds the team's name, its mascot "Rufus" (pictured), and its policies. Many opponents refuse to play scheduled games against the Niggers for these reasons, and some that do compete will not publish results of the contests. Likewise, most news outlets refuse to advertise upcoming games or print any statistics for the team. This is unfortunate, because the statistics are remarkable: Forfeits to the Niggers have produced entire seasons in which the team went undefeated.

"I don't understand the fuss [about the name]," says team manager Albin Whitely. "It's part of our team's history and heritage."

The Niggers have a long-standing, albeit one-sided, rivalry with the Mississippi Albinos. 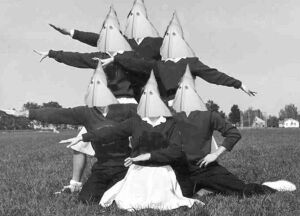 Cheerleaders not only whipped up the crowd but cross-sold Forrest's other venture.

Founded in 1898 in Birmingham by Nathan Bedford Forrest, who also founded the Ku Klux Klan, the name was selected to "harken back to the spirit of the hard-working, fun-loving Negro". The team has been all-white since it began play. Forrest followed this as a policy, and denied that it cost the team talent; he once quipped, "Some teams have Cracker-Jack players--We've just got crackers!"

The Niggers briefly joined the NCAA[1] and was completely overlooked by the NCAA's drive to stamp out racially offensive team names that refer to Native Americans.

One recent ownership group claimed that the team was actually named after Guy Gibson's (of Dam Busters fame) pet dog, which he named Nigger Dogshit Sandwich. However, the logo, mascots, and team publicity makes this claim difficult; and besides, Americans don't realize that anyone else was in World War II. 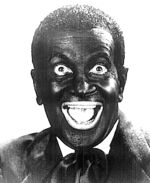 Fans often came to the ballpark wearing the Niggers' colors.

Forrest's original team played in one of baseball's first venues, a ballpark that featured a wooden grandstand and bleachers surrounding the diamond. Officially named Stonewall Jackson Memorial Stadium, fans simply dubbed it the "Slave Shack," the storied first home of the Niggers.

In the 1956 season, the owners group deemed that the old Shack was a firetrap and an eyesore. Money was raised for a new home for the team. The Nathan Bedford Forrest Stadium was named for the Niggers (and Klan) founder. Once again, fans gave the new venue its popular name "Shotgun Shack." The Shotgun was a concrete bowl structure that also served as the home of the football and soccer teams of Birmingham.

The Niggers played 40 great seasons at the Shotgun, but fans longed for a cozier, baseball-only stadium. In 1996 work was begun on the current home of the Niggers. With corporate sponsorship by Nabisco, the 1997 season saw the Niggers in Ritz Cracker Stadium, whose lines and dimensions echo baseball's golden-age venues. As usual in Niggers history, fans dubbed the new stadium "The Projects."

In 2008, Ritz Cracker Stadium was expanded due to continued sell-outs. Unflappable fans again christened the new section "the Whorehouse." Club executives were briefly uncomfortable, but probably brought the nickname on themselves by their decision to provide complimentary lap-dancing. "This full-service section is the perfect venue for the many fans who live and breathe Niggers," crowed Albin Whitely. 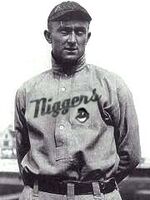 Ty Cobb got his start as a power hitter for, and of, the Niggers.

Several famous major-leaguers got their start with the Birmingham Niggers. Of note is Ty Cobb, the Detroit Tigers great, who began in the minor leagues for the Niggers. The "Georgia Peach," as he was affectionately called, credited his enlightened race-relations approach to Birmingham. He took to heart the opposing fans' signs of "Beat the Niggers," and tales abound of Cobb beating up black fans, black hotel employees, and black blacktoppers.

The Slave Shack was host to Cap Anson, who kept African-Americans out of Major League Baseball until 1947.

More recently, pitcher John Rocker called the Niggers home following his controversial major-league years. He always praised teammates and fans for being relatively easy to understand, and to tell apart.

The team's colors are Brown, Black, and Tan. The home uniform is a light tan with "Niggers" emblazoned on the chest in black. A small "Rufus" logo in the center of the black caps and helmets is also present in the road uniforms. The jersey and pant colors for the road are dark brown with "Niggers" in black. Their unreadability is viewed as an asset.

In the midst of recent depressed team memorabilia sales, ownership launched a campaign to replace "Rufus" with a mascot that would better appeal to the more enlightened modern fans. However, the winners of a fan poll were 'Bama the Porch Monkey and Bugs the Jungle Bunny. 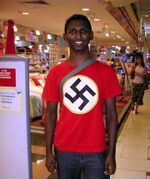 A Nebraska football fan who testified in the suit in which the Niggers filed a friend-of-the-court brief.

Controversy has arisen over the name, imagery, and the lack of African-American players on the Niggers' roster or in management. Boycotts, protests, and lawsuits have plagued the team in modern times. Downplaying the controversy, the team's media guide notes: "You don't see any Native Americans playing for the Indians or Redskins, do you?" NAACP spokesman JuWanna B. White confirmed, "No self-respecting brother would play in such an environment." But White has repeatedly asserted that the club led to the demise of the old Negro Leagues. "Yeah, the Niggers, they done did it," he said.

The American Civil Liberties Union represented the Niggers and the Nebraska Nazis of NFL football in three separate court cases, claiming the fans of both teams had the right to dress up in blackface or as Hitler, respectively. They won all their court cases, sparking nationwide riots each time.

In 1966, the Cleveland Indians filed a lawsuit against the Niggers, claiming that their Rufus logo was a cheap knock-off of the copyrighted Cleveland mascot, Chief Wahoo. However, the judge immediately dismissed the case, claiming that the lawsuit "only reinforced the notion that Niggers steal things." In fact, he ordered the Indians to pay the Niggers $500,000 as reparations for perpetuating stereotypes. As of 1975, over $450,000 of this money had gone to numerous Colombian drug lords, prostitution rings, rapper 50 Cent, and Kentucky Fried Chicken.

Despite being banned from the ballpark on a false accusation of drug possession, this man remains loyal to park ownership and opposes the African-American community's attempt to "Reclaim the Niggers."

Beginning in the 1970s, a number of African-American celebrities have expressed interest in "reclaiming the Niggers". Elder statesman and star of Cooking with Freebase, Richard Pryor, began discussions in the 1970s, though no movement was made toward a sale at that time. In the early 1990s, noted physician Dr. Dre expressed a desire to "Shout out to my Niggers!" True to form, however, the management group of the team refused any offers from Black entrepreneurs, and also denied rumors of an imminent sale (or indeed a later Eminem sale). Whitely remarked "I'm never selling my Niggers!"