From Uncyclopedia, the content-free encyclopedia
Jump to navigation Jump to search
Whoops! Maybe you were looking for Fanboy?

The Fantard (Homo sapiens fantardus) is a human subspieces who are influenced by the evil zone known as fandom. The most vicious can be seen at deviantART, LiveJournal, Gaia Online. EXTREME caution should be taken when wandering these sites, as it is extremely likely they will kill you and rearrange your body into a piece of fan art.

Fantards should not under any circumstances be mistaken for a normal fan. Fantards have a deranged obsession with their fandom. In fact, they are so obessive to their franchise that they ruin it, like a 4-year-old child who ends up hugging its pet cat to death. They spend their free day going to websites like deviantART and LiveJournal, making porn and fanfics of their favourite characters, which will inevitably ruin the hell of it. They then spend the other twelve hours of the day looking for critics, trolls and anti-fantards. If they find one, they will appear in masses (about 20-30) and stab them until kingdom come. So don't ever try to touch, or criticize their artworks or fanfics, or attack their fandom, or you will get what you deserve.

The common reaction by sensible people.

Fantards are extremely nightmarish creatures for every franchise. They create slash pairings (a fandom pairing that wants to knock up the same sex, such as men X men or women X women) that no sane person can stand, such as Gaara X Naruto. What's more, in order to add more gruesome effects, they even draw creative slash pairings which are beyond the normal immag-nation, such as Yugi X Atem which are obviously the same person doing their yaoi act.

If these are not insane enough, they will usually spawn an abomination known as an original character, or simply called as OC. It is basically a horribly mutilated canon character such as a green Sonic or a ninja that looks like Naruto, in a exceptionally stupid plot made by the fantard.

What's worse is if the OC gains much popularity, the fantard who spawned it will do a collaboration (simply called collab), with another fantard's OC, which is usually an OC having gay/lesbian sex with another OC. 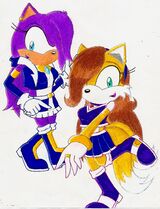 An example of a original character.

Under the Type 3 fantard are Type 2 fantards, which are also called "asskissers" or "white knights" because of their tendency to attack other people. According to French poet Anonymous, they are extremely dangerous. However, he is able to handle them, when according to Encyclopedia Dramatica, an average person is not able to handle one swarm of them. A variant of the Type 2 is the zombie fantard, who will obviously think Naruto X Gaara is the most KAWAII DESU NE couple.]] These are the true really dangerous ones. Because of this, they are the most primary driving forces in fanclubs.

A Fantard of the My Little Pony franchise is called a Brony. Above ranking systems do apply.

There is also a force called white knights, which follow the Type 3 fantard for the sole purpose of sex, which will obviously fail.

“Once, I found somebody who drew a sick yaoi picture of Gaara having sex with Naruto in deviantART, then I called them sick which is truth. The next day, I found my deviantART homepage coated with goatse and tubgirls.” 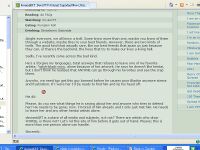 Before a fantard swarm goes blasting you, they will always go bawww with a white knight journal in order to send a signal for other fantards to attack you.

Fantards are known for their foul moods, and have extremely short tempers and will lash out against critics, trolls, other fanclubs, or people who insulted their magnificent Gaara. Therefore they are extremely dangerous to encounter. They also have an extreme rivalry with the common mind, so they always bring trouble to art or fanfic critics. Given they always swarm the victim, if the person is not ready for that, an angry swarm of fantard is able to totally destroy a homepage and overwhelm a person.

Also, the first sign of a angry fantard mass blasting you is you see a "white knight journal/notice/whatever" against you. But however, trolls, especially internet hate machines, are immune to such swarming, and will almost always successfully raid the fantard home base. 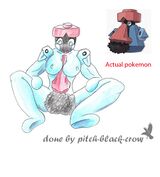 “Oh my god! They ruined Pokémon, Harry Potter and Naruto, by making sick couples of our normally fantastic characters!”

“Even I don't take my productions that seriously. Once I encountered a fanturd that said she had a boyfriend named Malfoy at Hogwarts. Of course I bitchslapped her due to her giga-stupidity.”

“One should not engage a fight against fantards; doing so will only cause your demise, unless you are a troll like me.”

~ Anonymous on the danger of fantards

“The nethermost fanart are not for the fathoming of eyes that see; for their badness is strange and terrific. Cursed the yaoi where weird gay couples live new and oddly bodied, and evil the crap that is ranted by no fantard. Wisely did Ibn Schacabao say, that 'happy is the fanart website where no fantard hath registered, and happy the town at night whose fantards are all banned'. For it is of old rumour that the soul of the devil-bought hastes not from this fanart website, but fats and instructs the very user that draws; till out of corruption horrid fanart springs, and the dull Fantards of deviantART wax crafty to vex it and draws weird fetishes to plague it. Great dung secretly is featured where pokemon ought to suffice, and fanart have been praised that ought to be ranted.” 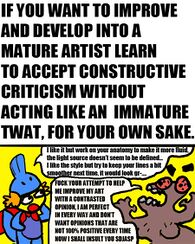 Fantard syndrome is the colletive term of you turning into a fantard. It was first discovered by deviantart admins, when they noticed that normal personnel turn into Type 2 fantards because they interact with zombie fantards. They also discovered that zombie fantards always carry the virus, and Type 2s and Type 3s will even sometimes carry it. It can potentially infect you via online websites.

Symptoms of when you are turning into one[edit]

Asspatting should occur after one week, after that the victim will join at least 3 original character (OC) groups/clubs/fanclubs. The worst symptoms is the victim starting to join attacks against critics, trolls and anti-fans, using troll-like ways, learning spamming and hacking. Finally 4Chan and Encyclopedia Dramatica will start to have a grudge against you, signaling the victim turning into a Type 2. If he/she is not destroyed he/she will even turn into a zombie fantard. Then the fantard will infect more innocent fans: as Martian Luther King Jr. said, "It's like leading them into a burning house."

If the Type 2 fantard hasn't turned a zombie fantard and drawn over 20 pieces of shitty fanart, he/she will turn into a Type 3 fantard, and possibly opening more fanclubs and producing more shitty fanart.

There is no cure for fantard syndrome, but there is a believed cure which is the reverse of fantard fandom, known as real fandom. It is composed of canon couples, reality and subtle humor.