~ Oscar Wilde on the first bro out 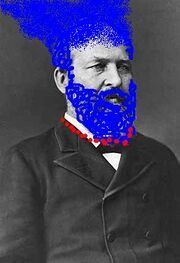 A bro is, contrary to unpopular belief, a derogatory term referring to males who possess mental handicaps. They are considered to be a crossover between both punks and the jocks, who naturally obsesses over their appearance to the extent that does not conform to heterosexuality. In general cases, they perform extremely physical-intensive sports like "chilling out," "hanging out," "going out," "rolling out," "smoking out," and "bro-ing out," most of which are never expertly attempted by people of conformational sanity.

The "bro culture" subcultural phenomenon has gained more prevalence during the 2000’s, up to the extent that members supersedes that of 4000 BC. Recent studies have discovered several disturbing (and possibly law-breaking) habitual activities including: chilling out, gatherings and shopping. A statistical analysis report by Umbrella Corporation revealed that one out of four suburban Caucasians will most likely become a bro at the age of 16 to 25.

There is a raging argument among anthropologic observers about common features members of “brodom” possess. There are, however, several established methods of identifying a bro. Of those, the most popular ones include a baseball cap with a prefrayed brim or an upside down visor, spiky hair with frosty tips, Birkenstock sandals, a raised truck with several decals on the back window, a wife beater or a pink-collared shirt with the collars “popped”, and in some extreme cases Pookah shells. Other than visual cues, other ways of identifying a bro exist, for one, their preferences, including: Jack Johnson CD’s, Natty Ice, Gamecube, Xbox, Playstation, Frisbee, Ultimate Frisbee, The T.V. show Family Guy, American Eagle Clothing, other bros company, anal penetration, and referring to any other human with one of the following terms: Bro, BROOOOOOO, B-Rohan, Brohan, Broski, Cuz, Brohanski, Broseph, or any other variation of the above.

Proven ways to repel a bro include: Science, Theology, Studies, Physical labor, Jobs (excluding blow), Bumpin' Bass(This will actually attract bros, especially if it is coming from a lifted truck), Non-Brain Intensive Sports, Newcastle ale, computers, people over the age of 25, and females with class and dignity.

Bro Culture bear significant resemblence to the jellyfish culture, where members just stone about. Recently, studies indicate that social risks of insanity, laziness, and latent homosexuality are of higher occurrences, which are attributed to the sharp rise in Bro Culture. Also, Bros are generally looked down for using up resources and wasting space, which is hence comparable to the Ewoks, hence giving rise to the phrase “There ain't no party like an Ewok Party".

A Bro-Out is a ceremony shrouded in mystery and drunkenness. The only people to ever talk about the Bro-Out ceremony are the Bro’s that eventually became WoW nerds. One of these former bros, Brian Wagner, speaks about his experiences in this strange ceremony…

A very primitive bro, of the guinea variety. Notice the complete douchebaggery...

Scientists have debated the origin of Bros and their initial appearance. Their hypothesis is as follows. Bros originally started as jellyfish whose primary function was to chill. After thousands of years they developed the ability to drink Natty Ice in large quantities and drive trucks whose wheels were extremely high. This is also where the popular phrase "don't taze me bro!" comes from. In their early stages the bros primitive brain was highly reactive to electric shock. Any activity of this kind would lead to instant death. Later, In their tribal stage they waged a long and chill war against the Pookah creatures. They still wear their shells as a trophy of kicking back with the bros and chilling. As a result of this the Pookah are on the verge of extinction. They were so unchill. Around the year 2002 the first bros crawled out of the sea with fully functioning lungs and legs. Nobody really noticed this, because they were so chill. In this short time the bros were able to evolve into even more disturbing creatures. These are some examples of bro mutation:

These bros have become much more aggressive leading them to lust for the blood of their fellow bros. Bros that had parents that didn’t support them or love them often show this mutation. Several ways of identifying an MMA bro are their Tapout or Affliction gear, use of chewing tobacco, baseball caps with a straight brim, going to the gym 23 hours a day, drinking muscle milk recreationally, loss of “chillness”, hella cool tattoos that show how badass they are (that they will later regret when they are working at McDonalds PART TIME OBVIOUSLY), and aggressive temperament.

This mutation usually occurs once MMA bro has hit his 30’s and realized that beating the shit out of other people is just a filler for the love and attention that he never received growing up. This mutation is named after a once famous bro named Hulk Hogan who realized that his life didn’t mean shit because he was just a meathead who had no education. The ways to recognize a Hulk Hogan bro include; alcoholism, clinical depression, calling people “bro” at their accounting firm, getting a real fucking job, living in their parents basements, having McDonalds 1 dollar menu be the staple of their diet, quietly contemplating suicide, but realizing nobody would give a shit, going out with a fat chick, going to a JC to try to learn how to think, joining the police department, and hanging out at your old high school trying to hit on girls ½ your age

This is the final evolution that scientists have been able to observe. This occurs after the Hulk Hogan bro has had time to realize what a piece of shit he is. He eventually realizes that there must be other complete fuck-ups out there to socialize with so he goes out and buys a motorcycle and tries again to act like a badass. Instead of socializing and interacting like every other human being, these Biker Bros get their tub of lard asses on these death traps and ride around in groups. They make noise, act like idiots, and generally carry on like baboons. I guess everybody needs somebody else to look smarter than. An example of these bros is that stupid ass movie with tool time guy, martin Laurence, and the gay guy from pulp fiction. That movie was terrible. It’s pretty obvious what a biker bro looks like, and if you can’t figure it out… maybe you should go piss on them.

This Evolution occurs when the bro suffers head trauma from extreme chill sessions. Because of the brain "damage" this form of bro becomes under the impression that they are professional skaters. Because they obviously are not, this often provides outsiders with a chance to observe and laugh at their pitiful attempts to do the hardest move in skateboarding the "kickflip". Common areas for spotting this type of bro are parking structures on college campuses or at your local Cumberland Farms. These bros can easily be identified by their plaid style clothing, Monster energy drink baseball caps, neon beanies they wear on the back of thier heads, and constant "biffing", and lack of motivation. Opposed to most "bro groups", sk8er bros tend to hang out in smaller packs thus having a better chance of surviving their only known predator "the campus police". scientists hypothesize that this group of bros may have some genetic relationship to the much maligned "hipster" clan, although this is purely speculatory.

These bros play lacrosse (a sport solely played by rich white douches) and look down on those who don't. Their Level of douchbaggery is increased when they are near Baseball Bros. These two are sworn bro-nemies.

This variety of bro usually occurs in suburban communities in northern california. Natty Ice bros are known to gather in their enormous hillside houses and engage in activities such as beer-pong (or "Bro-Pong" as they sometimes refer to it) and watching Sportcenter. The name "Natty Ice" bro comes from their habit of drinking Natural Ice, a type of beer made from titty milk.

Despite Ronald Reagan's attempts to exterminate all the Jews, many survived by hiding under their giant gold-plated yarmulkas until George Bush became president. These surviving Jews decided to form "The Brotherhood of Rad Jew Dudes Who Play X-Box" or "TBORJDWPX-B". The children of the members of this organization grew up to become what are known today as Jew Bros. Common traits of the Jew Bro include growing massive Jew-Fros, listening to Matisyahu, playing Ultimate Frisbee at the local Jewish Community Center, wearing San Francisco Giants hats tilted sideways, and writing articles for their high school newspaper that express a desire to have gay sex with Barack Obama. Jew Bros are also known for being punk ass bitches. Bob Dole.

Lamar Dukes is not a bro[edit]

When you are just plain bro-ing way too hard that your blood rushes to you weiner and your all like "Broooooo!" but you try to hide it incase your fellow broskis think your gay. If there are females or bro-hoes they will attempt to increase the size of said broner so as to apear to be more masculine. One bro put a fat keilbasa in his pants to appeR to have a massive broner. Unfortunatly the tube he used to tie tha suasage to himself cut off his circulation and he is know in either bro heaven or possibly bro hell since he died trying to con the bitches into sexy time.

Jonathan papelbon is known for being a bromo. He also can fly.