Preggos are a family of the family of Women, thereby making them distantly related to the High-School Girl and Hot Chick. Although similar to most other species of women, they can generally easily be distinguished by their large and very swollen abdomens. In addition, they tend to have larger breasts than other species of women. The most modern classification of preggos lists two gensuses in the family, Gravidia and Vora.

Gravidia , also called "true preggos", are the most common type of preggos. They are distinguished by the presence of of a uterine parasite of some type, generally, not always, a fetal Homo sapiens, in reproductive system. Usually, the parasite will reside in the uterus, but there are reports the parasite dwelling in the fallopian tubes. 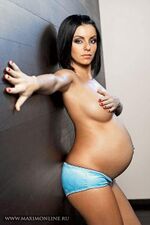 A regular preggo after carrying the parasite for approximately 7-8 months.

The fetus-bearing preggo, often called the "regular preggo", is as its name suggests, the most common type of preggo. It is identified by having a fetal Homo sapiens in its uterus. The fetus is commonly believed to arise from the merger of an Ovum and sperm cell. However, a minority of scientists assert that the fetus is implanted by a bird, typically the stork, as punishment for committing fornication. The parasite will generally remain in the womb for a period of 10 months, at which point the parasite will go out the vagina, either infecting more people or eventually becoming a preggo itself.

The newt-bearing preggo, has a newt parasite dwelling in its uterus. Unlike many other subspecies of preggo, the parasite is generally a permanent resident of the host's uterus, and the preggo may remain pregnant indefinitely. This is a rather rare species of preggo, the only current know example is Miranda Cosgrove.

It is commonly believed that the newt-bearing preggo was created by super-intelligent newts as part of there plan to take over the world with the aid of preggosexuals. If you are a preggosexual, which, since you are reading this article, you probably are, and would like to aid the newts in their plan to occupy human uteruses, please contact either Newtis Newtfield or Preggobear.

The unbirthing, or rebirthing preggo, this type of preggo has a post fetal human dwelling in its uterus. Formerly, this species was classified in the genus Vora. However, the two genera are properly distinguished by the location of the parasite. In the genus Gravidia, the parasite dwells in the uterus or other parts of the reproductive system, while in the genus Vora the fetus resides in the stomach or other parts of the digestive system. As the fetus of the unbirthing preggo dwells in the uterus, it is therefore clearly in genus Gravidia.

Unlike other members of the genus, the parasite of G. rebirthus does not develop while in the host. In fact, the parasite seems to acquire little to no benefit from residing in the host. This leads some scientists to assume that the preggo in fact seeks out and forcibly acquires the parasite for reasons unknown. Additionally, this type of preggo is associated with the sacrament of being born again.

The genus vora, typically called the "vore preggo" or "vore girl", houses its parasites in its digestive system, rather than its reproductive system. Occasionally, but not always, the parasite will be digested.

Some scientists have asserted that Vora should be classified in the family Cannibalius, and argued that the parasite is in fact prey. However, many parasites are known to survive for extended periods of time inside the digestive system of members of this genus. This would imply a parasitic, rather than a prey nature. Even if the parasite is digested, all types of parasites are occasionally killed by the immune system of their hosts. 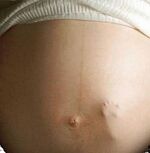 A vore preggo with the parasite clearly visible