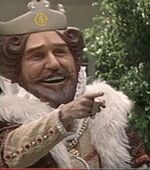 Larry Kudlow hopes for the United States to become a kingdom ruled by King Dollar.

A kingdom is a country ruled by a king (or sometimes a queen). Virtually every country has been one, at one time or another. A Kingdom was once the sign of a powerful and influential country. However, today the only successful kingdoms are out-buildings at Disney theme parks.

Kingdom can refer to a scientific division or subset, even though it is not ruled by a king or queen and does not have a Uncyclopedia article: Animal Kingdom, Mineral Kingdom, Vertebrate Kingdom, Kingdom of Plants That Make You Itch.

Kingdom can also refer to myriad unfunny fan-fiction articles that Uncyclopedia management has deleted, confident that copies exist on FANDOM or somewhere.

Several portions of the United States style themselves as kingdoms — though only to attract tourists, and if a monarch tried to take over, there would be sit-down strikes at all the McDonald's. These include the "Northeast Kingdom" of Vermont and the entire Upper Peninsula of Michigan.

What is left is the following:

Kingdom can also refer to:

This is a disambiguation page. This means we're trying to make sense of things. Stop us, now.