“Every Planet We Reach is Undead”

~ Gorillaz on crash landing in the Undead Kingdom 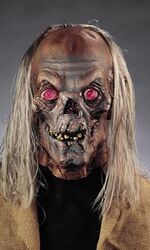 Maggot Thatcher, prime monster of the Undead Kingdom in the 1980's. SHe famously created a law making stupid joke monster names compulsory for all politicians.

The Undead Kingdom is a hideous, nightmare realm of unspeakable horror and misery. It exists as an alternate reality alongside the United Kingdom, but is entirely different from its counter part in the land of the living. Many believe that the Undead Kingdom exists as a sort of limbo punishment for souls who masterbated too much during their mortal lives to be allowed to soil the sheets in heaven.

The population of the Undead Kingdom are a depressed, dreary bunch, plodding to work each day under a bleak grey sky, to thankless jobs, before returning to their dingy little homes to dry and drown the monotony of their pointless existence with cheap booze, poorly made reality television and tickets for a lottery where you need to by about 14 million tickets to win the 3 million pound jackpot.

For reasons no one understands, the price of petrol is ridiculously high in the Undead Kingdom, and many are thus forced to take the public transport. Unfortunately the buses and trains are little more then over packed meat wagons, into which the barely alive, souless zombie workers are packed ever tighter. These are considered the lucky ones, because the arrival of a bus or train anywhere near the correct time is a mythical event in the Undead Kingdom.

The Undead Kingdom is lead by Parliament of the dead and the undead. The Dead House of Parliament, occasionally also known as the House of the Lords, is completely different to the form of government and democracy people in the U.K. would be used too. It consists of rows of ancient, half dead corpses, slowly decomposing in front of each other. Unlike in the United Kingdom, the two undead political parties are virtually identical, using the same platforms and copying ideas from each other shamelessly, though all their fancy election promises are soon forgotten once they get voted in. On the rare occasion when any number of them bother to show up, this ghouls just mumble "AYEEE...AYEEE..." or "NAYYY...NAYYY..." incessantly. The only policy they have been known to actually agree on is giving themselves regular pay raises. The current prime monster of the Undead Kingdom is Gordon BRAAAINNSS, a almost polar opposite of the modern prime minister of the United Kingdom. Gordon BRAAAINNSS, is known to have long been obsessed with gaining power, desperately wanting to be rid of the previous prime minister Tony Scare, but then proving himself to be an utterly incompetant, uncharismatic dolt as soon as he got power, even trying to weasel out of an election when he realised he might lose it.

People in the undead kingdom complain almost constantly. They complain about the weather being miserable (even though it never changes), the buses being late (even though they are always late), how rude everyone is (usually in a rude, sullen manner) and anything else they come across. It should be note that while these zombie-like beings may complain, that never take any action about their problems or complain to anyone who might help them. Instead they just whinge to each other ineffectually.

Thank goodness we dont live in a place like that![edit]

Yes, thank heavens that people in the United Kingdom live in a place completely unlike the Undead Kingdom. One can only shudder to think what it would be like to live somewhere like that!

Exports of the Undead Kingdom[edit]

None. They check in, but they don't check out.

Bit of a depressing way to end an article, but it's a country where everyone is dead, what did you expect?