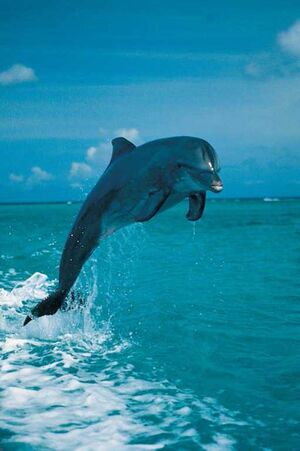 A successful levitation caught on film, performed in 1935 by magician Harry Houdini. Neither the subject nor Houdini were injured during the trick.

In physics, levitation (otherwise known as the Jesus Float) is a common process whereby massive objects are permanently placed anywhere from several inches to hundreds of miles above solid ground, completely unsupported and motionless. It is the classic textbook case of Newton's First Law of Inertia.

Levitation is often confused for many other (and entirely unrelated) phenomeni.

Displaced air, water, or dirt holds up the object in question. This is not levitation.

Even though Jesus is many times denser than water, anatomical evidence suggests that He has very large feet. Since surface tension alone is sufficient to hold up Jesus, walking on water ≠ levitation.

Many consider this to be a perfectly valid example of levitation because of the physical impossiblies involved. Look again, you dipshit: it is clearly the rope which is pushing upwards against (and actively supporting) the load. This is not levitation, either, but merely bad physics.

Stage magicians employ many means of fooling the audience into thinking that they are seeing impossible things like leggy supermodels, or bricks floating in mid-air, or leggy supermodels floating in mid-air with bricks in their hands. The actual fact of the matter is that this is all done with smoke, mirrors, and the awesome powers of Satan. This, too, is not levitation.

The supporting forces are transmitted by the power of thought alone. Many psychic oddballs promote this as levitation. However, this is a blatant lie, as will be seen shortly.

Same as above, but thoughts are replaced by extremely large magnets.

It is a well-known fact that gravity reduces to zero at approximately 35,786 kilometers above sea level (and goes negative at higher altitudes). Therefore, a geosynchronous satellite is, in fact, supported by purely fictional forces. This, yet again, is not levitation.

In retrospect, true levitation is non-support by nothing at all. Please get this through to your feeble mind now. It (levitation) does not mean is there no visible means of support (thereby implying that there exists some supporting force that is merely invisible or inexplicable); it means that there is, in fact, no support whatsoever. None. Period(!). No forces, fictional or otherwise. No air nor dirt. No ropes. No magnets. No psychic thoughts. No Satanic, Godly, or other evil powers. It (the massive object in question) simply just stays up there, completely unaffected by the local gravitational field or stray gravitons. 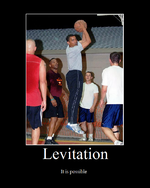 Levitation was first used by architects in various prefects of the Mushroom Kingdom during the mid 1980's. Individual bricks, blocks, and even entire walls were freely constructed with no connection whatsoever with the ground. When the Mushroom Kingdom finally acquired its third physical dimension some years later, assorted islands and whole mountains were hoisted up to ridiculous altitudes, in spite of the obvious lethal dangers posed to clumsy Italian plumbers.

Here's how a maglev train works...