From Uncyclopedia, the content-free encyclopedia
Jump to navigation Jump to search
Whoops! Maybe you were looking for Boobies?

Out of Body Experiences (OBEs) are lucid dreams in which consciousness enters a metaphysical plane of existence, seemingly out of body. 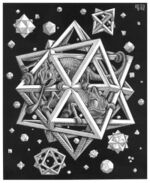 Artist M. C. Escher's depiction of the Astral Plane, which for very obvious reasons is full of chameleons trapped in truncated icosohedrons.

A nude witch using her inner demon as a surveillance camera in an astral replica of the physical universe. If the demon abandons her on the trip (never coming back to her body) she'll probbably wake up an not even remember the rest of her astral projection.

The astral plane is commonly understood by Rosicrucians to be the unused portion of Jehovah's cerebellum used for metaphorical symbolism and problem solving. However, Astronomers and Librarians hypothesize the astral plane is actually the manifestation of humankind's unrealized aspirations which can be accessed by ramming a genuine Atlantean crystal into one's heart chakra. Science has shown that with a spark in the angular gyrus on our brain, we will feel dislocated out of body and then see a copy of ourself and any place we remember or imagined in our heads. In the astral plane you have super powers, but you don't always realize that until the dream is about to end and you wake up pissed.
Others, like Wizards and cartoons maintain that the astral plane is one of many planes of existence which contains the collected contents of holes, bags, and the mysterious place from which cartoon characters commonly draw their weapons or store items. Still others maintain that the astral plane is the anal void of goatse expanded to horrifying proportions by the echoes of shock and horror reverberating throughout the collective consciousness as humanity's first steps in exploring the Internet lead it down the primrose path to Hell.

The Etheric Plane and Remote Viewing[edit]

The etheric plane is parallel to the astral plane and closest to the physical plane. It's very difficult for most people to consciously enter this plane of existence (most people get stuck in a sleep paralysis). Once you get there, you may be able to visit real places, time travel, and you can even develop telekinesis in real life. The ability to enter the etheric plan it's a form of clairvoyance that be used to actually spy on people. The military sometimes does remote viewing exercises with a form of this ability in order to find things, people, or places. Sometimes they catch people getting naughty. 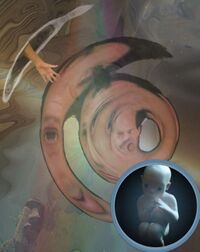 Even the Star Child (inset) is frightened by the astral plane. His innocence is too great to withstand the temptations of the warp.

One cannot hope to travel to the astral plane without first knowing where it is and how to get there. Unfortunately for would-be astral travelers, the plane's exact location is unknown, since no one can agree on what it exactly is. Far as we know, it might just be telepathic communication with the devil.
This is precisely why some have suggested it is universally present, much in the same way as is the eternal and undeniably creepy (yet platonic) love of Jesus. Despite the difficulty of transcending one's perception and material self through meditation, tithing, self-flagellation or spinning in really fast circles the astral plane is typically accessible only to priests, psychics, and actors. Besides those predisposed to fraud and self-aggrandization, only powerful rulers, superheroes, and those imbued with supernatural powers have been able to travel to the astral plane. Exactly how they do so remains a heavily guarded secret, and Johnny ain't tellin'. Laypersons are therefore left to assume the astral plane exists somewhere in Outer Space or within the subtle fluctuations of one's subconscious as exposed to one's inner genius by a lifetime of drug abuse.

Besides giant fucking chameleons and hostile geometries, the astral plane is inhabited by dangerous psychic parasites such as the solpugid, intellect devourer, and Timothy Leary. The astral plane is also host to innumerable perils of ambiguous and terrifying dispositions. One should also be warned of the recent accumulation of snakes on the plane and their alliance with the dark god Set, who surely comes to enslave mankind and force us all to bow before the brazen altars of sadism, madness, and corporate morale-raising initiatives. Astral projection is induced by spirits that make you think you're an "immortal soul". These spirits, aka spawns of satan, will seduce you with flatteries about being some nobleman in your past life and if you choose not to believe in them, they will try to choke you to death unless you have the light of the indwelling JEEZUS within you!