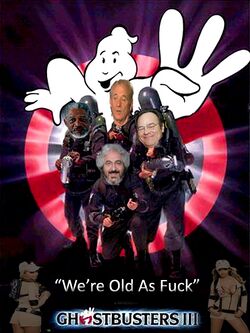 "When There's Something Geriatric, In Your Neighbourhood... Who You Gonna Call?

"Secret Of The Ooze"

There have been many scripts written for the 3rd installment, but Dan Akyrod and Harold Ramis have collaborated to make the final script. The movies plot is circulated around a woman named Pracllub who is now the caretaker of a place called "The Neverland Ranch" where she is dealing with a poltergeist that is touching children inappropriately. When you have a paranormal event like that, "Who You Gonna Call"?.

The Ghostbusters (Vienkman, Spenglar, Winston, Benson & Hedges) then hop in the Ecto Mobile and take a fun & whacky cross country road trip from New York City to California. Most of the movie takes place during their cross country adventures, including a stop off to Salem where they are greeted by an angry Blair Witch whom is not happy with their visit to her territory. They come close to being destroyed by her but Slimer comes to the rescue by violating her anus by surprise while she is bent over digging a hole to bury the filmed evidence of the orgy she made the Ghostbusters partake in unknowingly. The Blair Witch then falls in love with Slimer and the two of them live happily ever after in the ever after allowing the Ghostbusters to continue on their journey.

There is a lot of senior citizen driving gags thrown in on the way, which works well on behalf of the fact that the youngest Ghostbuster now is 73 years old. You can also expect a few hundred pop-culture references to Viagra, Colonoscopy Exams and such lines as; "When I was your age we didn't have MTV, we had to go out to concerts and do drugs".

There is a guaranteed soon to be "classic" scene written for the movie where The Ghostbusters make light comical reference to one of their famous quotes. The scene involves the Ghostbusters urinating on the side of the road and Veinkman is repeatedly singing; "Do not cross the streams" in the voice of Garfield.

It had been speculated that the "development hell" that had kept this movie from being made for so long was the need for a huge ending. Director Ivan Reitman had stated after Ghostbusters II that audiences expect bigger & more exciting endings and feels that is why Ghostbusters II was frowned upon. However the development team for GB3 have decided that they should play a gag on the audience and have a non-climactic but comical ending where the Ghostbusters finally arrive at their destination only to discover Scooby & Shaggy have already solved the case.

We sure hope these get busted out in the movie 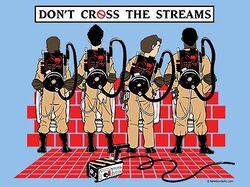