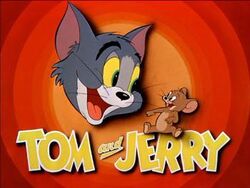 The Tom and Jerry title card, which makes the characters seem innocent and friendly enough. Of course, once the actual short begins, these expectations are quickly dashed.

Tom and Jerry is an American animated short film series created by William Hanna and Joseph Barbera on behalf of Metro-Goldwyn-Mayer, with later inferior shorts hastily tacked-on by Gene Deitch and Chuck Jones. It centers on a rivalry between its two title characters, the "worker cat" (Tom) and "parasite mouse" (Jerry), plus a handful of recurring characters reflecting attitudes of the 1940s–60s era. The humor in the shorts is based around pathos, avant-garde stylization, racism, sexism, uber-violence, and oppression, set to jazz and classical baroque.

Tom and Jerry won numerous awards and critical acclaim in its heyday and maintains popularity to this day, thanks to prominent reruns on the Children's Republic of Cartoons. Hanna and Barbera themselves later attempted to cash in on the craze with their own rehashes of the cat-and-mouse duo, such as a '70s Saturday morning cartoon where Tom and Jerry are friends(?) and a cutesy '90s movie where Tom and Jerry are not just friends but also talk(?!), but these greatly impaled in comparison to the original. 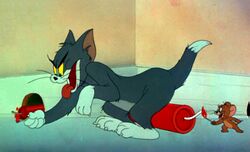 Tom (left) and Jerry (right) on a typical day.

The concept of using violent, oppressive cartoon characters to prepare the young for the toils of adult life, features bruising conflicts between a laborious, hard-working house cat (Tom) and a slothful, lecherous, lazy mouse (Jerry). The plots of each short usually center on Tom's numerous attempts to tame the maverick "brother" mouse, and demonstrate to the young communist the true meaning of justice, and how much it hurts. The conflict between Tom and Jerry, both illiterate peasants, stems from Tom's belief that capitalism is to blame for the misery of the proletariat — a new class of urban factory worker, who labors under hazardous conditions and oppressive leadership. Jerry however, represents the young rebel.

Tom rarely succeeds in catching — or even becoming a threat — to Jerry, partially due to his cunning, but also due to the constant intervention of his abusive owner and NAACP representative, Mammy Two-Shoes. Strike action, abuse of the "scab" workers, and mealy-mouthed to the racist hierarchy, Mammy is a 26-inch nail through the tongue of the compliant communist cat. However, there are a few instances where the duo bury the hatchet in someone else's skull for a change and get along, but only for the award ceremonies or to meet the kids.

Tom explores every comedic form of violence from axes, claw hammers, firearms, firecrackers, explosives, traps, and dynamite-packed cheese to tame the rebel, but Jerry's methods of retaliation are cleverer. The mouse will attempt to get Tom to make a mistake, like sawing off his own head, or driving the lawnmower over Mammy's face. Mammy, oblivious to Jerry's existence, blames Tom and is graphically brutal in punishing her pet's mistakes. Retaliation includes being put through a mincer, being skinned alive, or dismemberment/disembowelment, actions almost bordering on animal abuse.

Generally, there is little dialogue as Tom and Jerry themselves almost never speak, save for occasional squeaks or gasps, plus Tom's comical screams in pain when he is getting mauled by Mammy. However, other characters are not similarly limited; Mammy speaks multiple times when thrashing Tom, often with much of the venom used by Bill O'Reilly when debating Al Franken.

For the religious among us who choose to believe lies, the self-proclaimed experts at Wikipedia have an article very remotely related to Tom and Jerry.

Tom is a diligent yet dim-witted cat who is constantly trying to catch Jerry. He is the designated "villain" of the series, even though viewers tend to sympathize with him more than that little parasite Jerry; although very devoted to the Mammyland, Tom is ultimately no match for Jerry's sloppy, tasteless pranks. While most typical cat-chases-mouse scenarios end with the mouse getting eaten, it is surprisingly quite rare for Tom to actually try and eat Jerry; most of his attempts are just to get Jerry to see the light of communism.

Jerry is a lecherous mouse who enjoys torturing and pulling pranks on Tom. Despite his craftiness, he is addicted to cheese, which Tom uses as an advantage, as everyone knows capitalists can't resist taking cheese lying on an obvious mousetrap in plain sight. By the final "fade-out" of most cartoons, Jerry emerges triumphant, usually mean-spiritedly dancing and laughing in celebration nearby, even at times when the little jerk clearly didn't deserve to win. Both characters — especially Jerry — display sadistic tendencies, in that they are equally likely to take pleasure in tormenting each other.

Mammy is Tom's stereotypical sassy finger-snapping black lady owner and the maid of the house, seen in the '40s shorts before a yuppie couple replaced her as Tom's owner in the '50s shorts. She has anger issues and is harsh to Tom for even the tiniest of mistakes, often whooping the poor cat with a broom or booting him out of the house when he fails to catch Jerry.

In its original run, Hanna-Barbera were tasked to produce 114 Tom and Jerry shorts for Metro-Goldwyn-Mayer in Hollywood, California from 1940 to 1958. All of the shorts were directed by Hanna and Barbera and produced by Fred Quimby until 1955; if a Tom and Jerry short has a "Produced by Fred Quimby" credit at the start, then you are guaranteed quality, otherwise stay away. Hanna and Barbera themselves wrote all of the cartoons, due to their unrivaled creativity in inventing ways to inflict terrible suffering in a way that is funny to young children. The majority of the sound and vocal effects, particularly Tom's screaming, were provided by William Hanna and an ACME branding iron. Music also played a very important part in the shorts, lending emotion to the scenes (in most cases, the emotion being "Faster, pussycat! Killkillkill!"). Musical director Scott Bradley created complex scores that combined elements of Bard music, VIAs, and acid jazz; Bradley often reprised Bohemian Forest folk songs, as well as epic scores from previous MGM films, including Ben-Hur and The Phantom of the Opera.

In 1957, MGM decided that cartoons were dying out and live-action was the way of the future, and shut down their cartoon studio, leaving Hanna and Barbara out on the streets for a few years. Later, Hanna and Barbera would found their own animation studio and become the Roger Cormans of animation, producing legendary cheap fodder for TV Saturday mornings like The Flintstones, The Jetsons, Yogi Bear, Huckleberry Hound, Space Ghost, and Scooby Doo. In 1961, MGM realized that cartoons weren't dying out and revived the Tom and Jerry series under the direction of Gene Deitch's Rembrandt Films, based in communist Czechoslovakia. The Czech animators had never seen a single Tom and Jerry cartoon in their lives, and Deitch was not a fan of the series' violent humor, but that didn't stop MGM from hiring them and giving them only a fraction of the budget that Hanna-Barbera had. The shorts resembled a Tom and Jerry-themed acid trip nightmare, featuring futuristic sound effects, psychedelic electronic music, herky-jerky animation, and violence that was more painful and realistic than usual (especially against Tom). Deitch directed thirteen shorts in total before his contract with MGM expired in 1962; his shorts made even bigger bucks for MGM than H-B's despite the reduced quality, allowing Tom and Jerry to overtake Looney Tunes at the '60s box office.

In 1963, MGM decided to revive Tom and Jerry once more with feeling, and brought it all back home (literally) to American soil. They hired Chuck Jones, who had recently been let go from Warner Bros. as they believed cartoons were dying out (sound familiar?), and he produced another 34 T&J shorts with Sib Tower 12 Productions. While less painful to watch than Deitch's shorts, Jones's shorts seemed to favor style over substance and felt more like reskinned Roadrunner and Coyote cartoons than Tom and Jerry. The Tom and Jerry series concluded in 1967, just in time to see the Summer of Love blossom, and MGM closed down their animation division (again) for good in 1970, as they believed cartoons were dying out (again). Luckily, the series lived on through syndicated television reruns and cheap spinoffs.

During its heyday, Tom and Jerry won seven Academy Awards for Most Compulsive Demonstration of Population Control Methods, tying for first place with Walt Disney's literally eye-popping, ultra-violent Silly Symphonies, who took the most awards in the category. Tom and Jerry also became the highest-grossing animated short film series of that time, overtaking Warner Bros.' Looney Tunes, which wasn't as much a bloodbath as its competitor and thus not as entertaining to American audiences.

However, the series was also widely criticized as an incredibly violent cartoon by parents and cowards. According to these soccer moms, the cartoons set bad examples for children and taught them to be violent. Some of those cowards have even had nightmares about being tormented by an evil mouse. In 2002, Crotia decided to shelve Tom and Jerry from television airing, on the grounds that "children could find it disturbing."