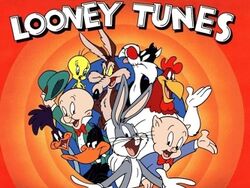 A Japanese devotee of The League of Looney Tunes worships his god, Bugs Bunny, not realizing he will be killed (from the now-banned cartoon, Bugs Bunny Nips the Nips).

There were other characters created such as Wile E. Coyote, the Roadrunner, Marvin the Martian, Foghorn Leghorn, Yosemite Sam, Sylvester the Cat, Granny, Tweety Pie, and Pepé Le Pew to name a few, but they were mainly used in propaganda missions and diplomatic events. Speedy Gonzales, uncle of buccaneer and former U.S. Attorney General Alberto Gonzales, was particularly useful in persuading the Mexicans that the U.S. was really very harmless, and that they were too lazy to notice people sneaking across the border.

For those without comedic tastes, the self-proclaimed experts at Wikipedia have an article about Looney Tunes.

In the early 1930s, towards the beginning of the Great Depression, experiments were afoot in the laboratories of the land they so proudly called the United States of America. In most of these laboratories, they were testing atomic bombs, but there was one laboratory that stood out from the rest, in that they were testing cartoons. This particular lab, located in Hollywood, California, was run under contract from the U.S. government by the Warner Bros., Yakko and Wakko, and the Warner Sister, Dot (they may or may not have been directly related to the Marx Bros).

The Warners' prime cause was to avoid a takeover of Congress by the emerging popular Disney characters — hence the term "Mickey Mouse government". Wakko, being the more insane of the siblings, was primed with the mission to draw cartoons who would help to overthrow the evil Disney corporation by attacking their studios, and causing general violence and mayhem. This would be offset by calling their characters "the Looney Tunes", thus keeping the general public at bay believing they were just a load of clowns making a pitiful attempt at copying Disney.

The first of these cartoons created by the great Wakko was Bosko, his very first attempt to blatantly copy Disney. This character shocked people to the core, as it was the very first evil cartoon character. However, Bosko was quickly replaced and surpassed by the even eviler Buddy. Buddy in turn was replaced by the evilest character of them all, Bugs Bunny. Bugs was evil in a way never seen before; the U.S. Army noticed and even considered using him on secret missions in the annual wars. Wakko was much pleased by this positive result and went on to create even more evil characters such as Daffy Duck and Porky Pig.

After years of training, Bugs Bunny was dispatched to the Mojave National Preserve as an experiment to test the abilities of expert rabbit-hunter Elmer Fudd. But after such intense training, not even an expert could kill Bugs! As the years passed and the U.S. was engulfed by World War II, Bugs would constantly tunnel through land and sea to get a vacation, but almost always ended up in the wrong place, where his life would be slightly threatened by a revenge-seeking Elmer Fudd. Unaware of this, the Japanese government placed Daffy Duck before Elmer Fudd; although Daffy was never killed by Elmer, he was indeed severely injured.

After the murder suicide of Adolf Hitler and the end of WWII, information regarding eleven Warner experiments were hidden from the public, their documents shredded and burned in a puritan ritual by the Federal Censorship Commission, which then hired the KGB to seek and destroy Bugs Bunny. They found Bugs taking a vacation in Hollywood, and they set up an elaborate trap to capture and kill him. They set up a trail of sunflowers leading to an alley where three KGB agents stood, their machine guns pointing at Bugs. As the agents asked Bugs of he had any last words to say, Bugs noticed a wet paint sign on one of the buildings, then saw a bucket of paint on the ground, and devised an escape plan.

Bugs told the agents to look up at the sky, and they did, whilst Bugs used the paint from the bucket to paint himself so he could blend in with the building. When the agents removed their gaze from the sky, they didn't see Bugs, who then began tunneling under the building. The agents fired down the hole, into which they then jumped to see if they had gotten a lucky shot. At last, victory for Mother Russia; Bugs is gone! Whup, nice try dodongo! It turned out Bugs began tunneling forward just in time, and none of the bullets hit him. He continued to tunnel forward as the agents chased him, and tunneled a path that was designed so that the building fell onto the agents, flattening them like pancakes in classic cartoon fashion. 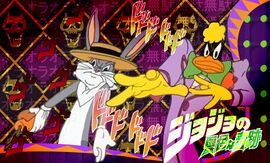 Following the retirement of producer Leon Schlesinger and the addition of directors Chuck Jones, Tex Avery, and Bob Clampett, more characters were introduced to Looney Tunes, and their adventures distracted the nation long enough for the American government to have Lt. Speedy Gonzales smuggle a large surplus of anvils across the border to Mexico. The perpetually-hilarious battle between Wile E. Coyote and Roadrunner began here, as well as that between Tweety and Sylvester; the countless attempts by the big guys to capture their little guy rivals always proved unsuccessful.

Meanwhile, the one KGB agent who survived being flattened by Bugs like a pancake was back on his feet — figuratively. Since his spine was damaged, he couldn't walk, and he was forced to move by wheelchair. He spent two decades wheelin' across continental Asia, recruiting people for an armada whose sole purpose was to kill Bugs Bunny in the most gruesome way possible.

Asian Commandos Making Enforcement (ACME) arrived on the California shores and marched onto the battlefield; on the other side was one male rabbit — Bugs Bunny. The KGB agent that was immobilized by Bugs sounded a conch shell, which signaled ACME to kill Bugs, who promptly began to tunnel away southward. He tunneled so deep that his ground bulge trail dissipated, making him untraceable — until ACME found Lt. Speedy and forced him to track Bugs down.

Exhausted from tunneling several thousands of miles, Bugs emerged in Mexico. There he saw the corpse of his rival/friend Daffy, who had been overwhelmed by greed and shot dead while on the run from the law. Feeling sorrowful, Bugs lifted Daffy's body, carried it for miles back to Hollywood, and buried it next to Bosko. As Bugs walked back home, he was surrounded by ACME officers and arrested for illegally crossing the Mexican border. After being cuffed, Bugs slumped to his knees, bit down on one of the officer's guns like it was a carrot, and said to the officer, "Rabbit Season, fire"; the officer complied. 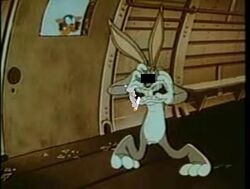 In 1968, Bugs Bunny suffered a nervous breakdown. It is thought this may have been one of the factors leading up to the eventual breakup of the Looney Tunes.

Despite these setbacks, Warner Bros. wasn't about to lose their biggest cash cow, and resolved to revive Looney Tunes (both figuratively and literally). They cloned Bugs and Daffy from flakes of skin that they left in their dressing rooms, and grew the clones on the back of longtime rival Mickey Mouse after beating him over the head with a shovel and putting him in suspended animation. Growing two clones on Mickey's back proved to require serious effort, as both Bugs and Daffy were of a different species.

With the two most famous characters replaced, Looney Tunes began to slowly fall apart. The animation became cruder, the humor less intelligent, the music more repetitive, the pacing more sluggish, and the famous opening sequence was no longer used and replaced with a weird trippy one. Bugs and Daffy's clones were adequately talented at acting, but due to lower animation budgets they reached the Uncanny Valley, creating an illusion that made them seem like bad actors. In the new cartoons, Daffy chased Speedy for whatever reason, Wile E. Coyote and the Road Runner became unfunny, and new characters appeared like Cool Cat, Colonel Rimfire, Bunny and Claude, and Merlin the Magic Mouse who weren't funny either. The fans lost interest in the series, and within a few years, production was canceled.

In 1969, Looney Tunes ended and the gang broke up. The last time the gang would meet was on July 26, to shoot their farewell short Bugged By a Bee (Th-th-th-That's All Folks; Now Screw This, I'm Outta Here). The Warner Bros. and Warner Sister went into a deep depression as a result, and went into seclusion in the WB Water Tower for the next two decades.

Bugs Bunny became a famous stand-up comedian, but continued his U.S. government job on the side. He is currently thought to be on a secret mission inside Syria, to help rebel factions overthrow Assad's government, though it's also wise to check southeast Georgia, where Bugs is rumored to vacating. Syrian spies have placed mines in these areas, that Bugs may explode upon shoveling his saw into the Florida border.

Daffy Duck attempted to start his own band, Daffy Duck's Quackbusters, but was unsuccessful. After the failure of this band, he began hanging out with Brendan Fraser and eventually moved in with him. Daffy's current whereabouts are unknown, but he is rumored to be detained at a top-secret facility for insane toons.

Porky Pig still works in "public relations" for the Warner Bros. and Warner Sister, on an unknown salary.

Elmer Fudd faded into obscurity and won the Nimrod Award for Best Duck Hunter, even though he never shot Bugs Bunny. His current whereabouts are unknown, and remain classified by the Warner Studios.

Foghorn Leghorn would eventually land a star role in the smash hit chicksploitation movie Throw Momma from the Train. For years everyone thought he was just a random rooster in the background, but little did they know he was actually The Momma. For this role, he had gained fifty tons and thus was very fattie and unrecognizable.

Taz now lives a quiet existence as the mayor of a small town in Tasmania.

Since its success during the short film era of cartoons, Looney Tunes has become a worldwide media franchise, spawning several lackluster television series, cheesy feature films, comic books, rap albums, ghetto t-shirts, video games, amusement park rides, and "Where Are They Now?" television specials; as well as serving as Warner Bros.' cash cow. The characters are iconic, and several Looney Tunes shorts are regarded as some of the greatest cartoons of all time. Eat that, Tom and Jerry.

From 1992 to 2004, Looney Tunes reruns were a staple of classic Cartoon Network. However, in 2004, the series was moved over to CN's sister channel/retro graveyard Boomerang, as parents complained the show had subliminal messages encouraging children to turn into "duck season, rabbit season, Elmer season" dueling maniacs who eat carrot shrivels. CN eventually brought the Tunes back in 2009, to recoup ratings after they lost 95% of their viewers by adding pointless live-action shows.

In 2014, the classic Looney Tunes, plus Lola "Furry Magnet" Bunny from Space Jam, appeared on Cartoon Network's Seinfeld pastiche called The Looney Tunes Show. Bugs Bunny was given the lead role and paid an astounding $500,000 salary per episode. Four seasons in, the show was renamed Marvfeld and the focus shifted over to Marvin the Martian, with Bugs's salary dropping to $5. After twelve seasons, Marvin called it quits because he thought the show would get stale and cheesy. The Marvfeld curse fell upon Bugs and he never got any more gigs, but that's okay, because he's still 1385% richer than all the other Looney Tunes put together.