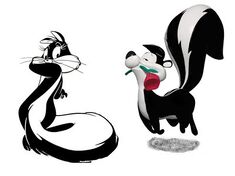 The Le Pew features revolved around the etiquette of courtship. Here, the suitor offers a rose in hopes of getting some.

Pepé Le Pew is a cartoon French skunk introduced by Warner Bros. in 1945, illustrated by Cockney animators in "pen and ink." Le Pew has a Charles Boyer-like French accent and is constantly on the quest for love, independently of whether the objects of his conquest were on the quest for a gropey skunk. Happily, Le Pew's entire career was before the advent of Smell-O-Vision to the cinema, and audiences could mostly experience Le Pew at greater than nose's length.

WB executives believed their Looney Tunes catalog of short features contained nothing for the stalker and rapist communities. Le Pew was thus created by animation producer Eddie Selzer, who at various times claimed Le Pew was patterned after one of his gropey colleagues or an idealized version of himself.

Le Pew storylines typically feature a black cat, Penelope Pussycat, as the object of Le Pew's attention. Le Pew presumably takes pity on the cat, whose lack of a white stripe down the middle must make her an outcast in skunk society. The cat usually evades Le Pew based on his stench, his aggressiveness, or the fact that her girlfriends all say he claims at the end of the meal to have no money to pay the bill. However, Le Pew shows no loss of confidence no matter how directly rebuffed.

For those without comedic tastes, the self-proclaimed experts at Wikipedia have an article about Pepé Le Pew.

Le Pew has made cameo appearances in several Bugs Bunny cartoons, and as a safety for the New England Patriots. He took the field for 5 snaps in 2020 and on each occasion induced the quarterback to target some other part of the field. Le Pew was going to have a cameo in Who Framed Roger Rabbit (1988) but was dropped when Rabbit objected to the odor.

Le Pew appeared in Space Jam (1996), with a voice oddly transformed into that of Maurice Chevalier. The movie has him hanging out with Michael Jordan and other NBA basketball stars, who have a comparable fixation on picking up "ho's" after an exhausting game on the court. Le Pew's co-stars eschewed the usual post-game shower in order to help him fit in. 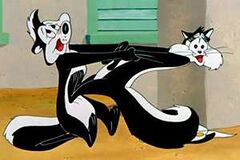 Le Pew shorts also taught a wide variety of sexual positions, such as this standing embrace.

Various Looney Tunes perform an educational function, with stereotypical features of geography such as the Eiffel Tower, and a smattering of pidgin French. In this dialect of French, which is popular in the Caribbean, English words are preceded by le (or, when in Germany, ze). Voilà, c'est le French! Advanced lessons teach French grammar, such as Ma sweet peanut of brittle. Warner Bros. left lessons of French pronunciation to more nuanced teachers such as Elmer Fudd. The Le Pew series has been translated and dubbed in French, with reciprocal contempt for English.

Unfortunately, Le Pew has been criticized for normalizing rape culture, as well as inviting ridicule of Frenchmen, skunks, and cheesy old cartoons. A 2017 degree thesis, "Exploring issues of queerness, speciesism, and disability in Looney Tunes" validated Rush Limbaugh's classic point that feminism is for ugly co-eds who can't get dates (and whose papers no one reads either). The author got the last laugh (though still no date) as Warner Bros. in 2020 wrote Le Pew out of the script for a planned sequel featuring LeBron James entitled Space Jam 2: A New Leg (2021).

In 2021, adamant advocates suddenly reversed their deepest beliefs. The #MeToo movement bit down hard in New York State but vanished elsewhere, giving Le Pew fans new hope for him to star in a feature film, based on a popular new leader with only baseline facility with his native language, something wrong with his nose, and a penchant for unwanted groping. 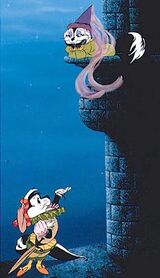 Just before Le Pew met his lady love, Penelope "What's New" Pussycat, he had stunk his way out of a serious relationship with Marie LeFoo, who had auditioned for the role of his on-screen lover in the short Odor-able Kitty. Le Pew attended the 1945 Academy Awards alone, where he saw Penelope and fell instantly in love with her. After Le Pew's cartoon won, she fell in love with him too: Though she played a cat on screen, she was actually a skunk. However, the romance was ill-fated; she was a Disney character, while Le Pew was under exclusive contract with the rival Warner Bros. studio.

After the award ceremony, Le Pew boldly snuck into the Disney studio to confess his love for Penelope, though it could have easily gotten him erased. She returned his forceful love, and the two were secretly married the next day. Upon uncovering the marriage, Penelope's cousin Flower objected and challenged Le Pew to a catfight, but Le Pew, always a pacifist (except around his lovers), refused to fight his in-laws. Le Pew's pal, fellow Warner Bros. star Tweety, got involved with tragic results (though his nemesis, Sylvester the Cat, got a good snack out of it). On the death of Tweety, Le Pew demanded satisfaction from Flower, spray at twenty paces. Word of this drama reached WB head Wakko Warner, and while ordinarily Le Pew's punishment would be the eraser, Wakko only demanded that Le Pew look for a different studio.

Penelope appealed to Warner Bros. illustrator and "super-genius" Wile E. Coyote. He devised a plan to enable the two of them to be together, creating a potion that made Penelope appear dead, unbeknownst to Le Pew. Le Pew, when informed of Penelope's apparent death, erased himself; Penelope, when she woke up, found Le Pew dead and erased herself beside him.

Smelly French rapists mourned Le Pew's death. In 1945, Warner Bros. and Disney both saw a commercial opportunity and reanimated the noisome lovers for a mass audience in Looney Tunes.