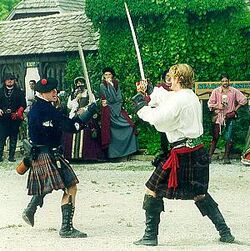 ~ Yugi on Starting a duel.

The duel is a tradition about as old as the invention of the glove. It is initiated by one party in the dispute slapping the other with a glove, and then saying something derogatory regarding their opponents parentage. Often this would be followed up by a shout of “I challenge you to a duel!”, and then a fight to the death. This must be distinguished from the far less violent 18th century game “Go Slap a Man on the Face with an Empty Glove, I Dare Say”, a game that consisted of simply running up to people and slapping them in the face with an empty glove.

Before the invention of the duel, humans violently settled disputes with the massacre, in which two sides, both of which oppose each other, would run at members of the other side and attempt to kill them. However, this often ended up with deaths in battle being about twice what would be optimal. The duel came into fashion, and with it, a far more civilised form of violence was created.

Duelling went well on into the 20th century until everyone had a bank account, and you were not allowed to carry a sword around with you any more. 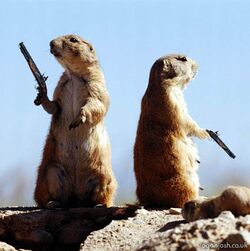 Dawn on the prairie.

As was often the case, a duel meant that two men entered, and one man left and one man was crawling on the ground screaming in pain wondering why someone would shoot him and not be gentlemanly enough to get him medical attention or to at least shoot him again.

The common rules of a duel would be that one man would slap the other with a glove and say “I challenge you (or ye, if thou shalt be speaking ye olde englishe) to a duel .” Then, the man who was challenged would either accept, in which he would say “Bring it on bitch (or Bringe ite one bitche)”, or decline in which he would say “I’m sorry, but I’d much rather settle our disputes through non-violent discussions.”

If the challenge was accepted, the men would look at their schedules and see when potential death would suit them best. Often times, this would be at dawn, so that way both parties could request off from work and be well rested. Then the weapons would be chosen. Usually, swords or pistols were chosen, but sometimes axes or knives. By far the safest weapon (a large piece of swiss cheese) was used by swedish aristocrats until the 1980s and fatalities were few and far between.

Many reasons could be provided for duelling. The most popular tended to be an insult to another man’s ‘honour’. Generally this meant his opponent had said something unpleasant about his mother, insulted his father or possibly shagged his sister.

Most duels were fought to the death. The champion could walk away knowing that he had a clear victory. Granted, there was no bragging rights to never losing a duel. It was pretty obvious that most people did not lose a duel. Much in the way that you can’t brag about winning Russian roulette.

In the modern era, the duel has fallen wayside to the brawl, were disputes are decided violently, but without actual killing. This new age of understanding has signalled the end of the gentleman as a man of honour, and duels are no more. There is however still a fair bit of glove slapping which goes on.