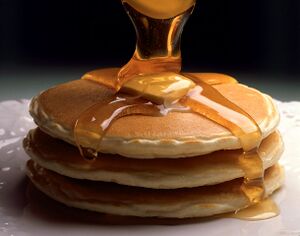 The pancake (now commonly referred to as flapjack, griddle cake, hotcakes and crepes) is a close relative to the heathen devil's food, the waffle. Contrary to the utter nonsense found on the waffle page, the pancake is infinitely better than the waffle. The pancake was invented by the Dutch, who unlike their Belgian neighbors (who invented the waffle), were first to come up with the idea of putting a flour-based batter on a hot griddle. They also invented the term "Smoke and a pancake?"

Why pancakes are better than waffles[edit] 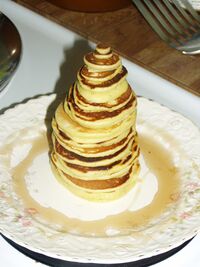 Pancakes come in many sizes

Pancakes outnumber the waffle 5 to one. At diners, you can get a whole stack of five, fluffy, buttermilk pancakes for the price of one rock-hard Belgian waffle that was probably frozen.

Unlike its cratered cousin, the waffle, it is superior in its ability to act like a sponge. It can absorb the syrup with which it is often covered — or wipe up many other common kitchen spills — whereas the waffle simply forces the sweet, viscous liquid into the confined nooks covering its top and bottom surfaces.

Pancakes come in a wider variety of shapes and sizes; whereas most waffles tend to be either circular or rectangular (with perforations), or occasionally in the shape of Mickey Mouse's head. Pancakes are more aerodynamic than waffles, as demonstrated by the pancake's ability to remain airborne when flipped, while the waffle tends to fall like an lead weight. Thus, pancakes serve as plates, hats, shoes, body-armor, cushions, frisbees and as wall decorations; whereas there are few if any backyard games that involve waffles.

And pancakes are designed with the common man in mind. All that is required for pancake generation is a simple frying pan. Waffle-generation requires a special utensil.

Mash all the ingredients in a large mixing bowl. Pour into the frying pan and flip when the bottom is done. Or if you like, skip that and just go to the eating part. It all tastes the same anyway. Remove from the pan and enjoy with sweet, sweet maple syrup. 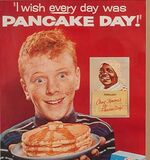 Pancakes are known for their mind-controlling qualities.

Bunnies like to wear pancakes as hats. You should try it too.

Everyone knows that pancakes have many potential uses

effective personal body armour that can be easily replaced and is really, really, cheap. Not tested (Use month old pancakes for this task)

Exfoliate your dry haggard skin with this moisturizing pancake mask!

Pancakes as a Unit of Time[edit] 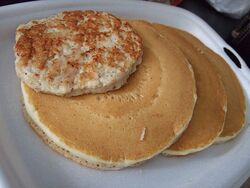 These things will never do you wrong.

At one point, the US Air force considered using giant pancakes as a vertical takeoff/landing fighter but a majority of pilots were unable to differentiate its front and back ends; rendering navigation well-nigh impossible. This problem was further compounded by the tendency of said pilots to mark the dorsal-anterior end by biting it - but then become overwhelmed by its spongy goodness and consume a fair portion of the aircraft. The Flying Flapjack sized in at an amazing 26 feet 8 inches in diameter, making it easily the biggest pancake in the world. Unfortunately, due to drastic budget cuts on the project, the airforce was forced to cancel its pancake airfoil projects and settled instead for a nice, tasty breakfast.

In his famous book "The origin of Pancakes," Charles Darwin was one of the first to postulate that Hitler was the cause of pancakes. This fact is now widley confirmed by Pancologists using modern experimentation methods. However some fringe scientists have recently forwarded the theory that correlation lies in the opposite direction, instead claiming that Pancakes caused Hitler. This hypothesis is usually discredited by referencing the universally accepted "Everyone is Hitler" Theorum. Then pointing out the fact that pancakes non-autonymous entities, and require humans for sustanence and life. Proving that they must have evolved, at least in their present form, some time after the appearance of hominids.

However still much about pancakes remains a mystery. Scientists have been baffled over the years as to how the pancake tastes as good as it does. Recently Expert Foodologists have a new theory that the pancake is a descendant of the Pizza. This reminded them of the greatest scientific question ever, What came first, the McDonald's or the Burger King?.

For those without comedic tastes, the so-called experts at Wikipedia have an article about Pancake.
Retrieved from "https://uncyclopedia.com/w/index.php?title=Pancake&oldid=6084857"
Categories: