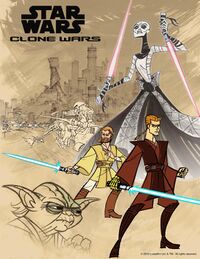 Clone Wars was made by the same people who brought you the similarly hyperkinetic action-packed anime-wannabe series Samurai Jack and Powerpuff Girls. That should say it all, really.

Star Wars: Clone Wars was a 2003–2005 intergalactic gallery exhibition series of 25 untitled historical holopaintings depicting a war fought across verdant alien landscapes in the vein of romantic nationalism through a campaign of planet-hopping epic battles across the Pacific Outer Rim, fought by space marines. Historians of the Star Wars prequel period believe that the conflict stemmed from the decadence of upper-class special-interest trade guild and banking clan lobbyists with aristocrats in the Galactic Senate prior to the social stratification of the peasantry into stormtroopers challenging the historical monopoly of the Jedi social class on state violence, similar to the situation during the wars of national unity in Sengoku-period Japan.

These paintings bridge the narrative gap between Episode II: Attack of the Clones and Episode III: Revenge of the Sith; Neo wasn't the only robot maintenance man from the early 2000s who desperately needed a cool anthology of cartoons to make up for a couple of lackluster blockbusters. However, they are done in an exaggerated and stylized form unlike that of the live-action Star Wars films, with most episodes consisting of 90% nonstop action and the remaining 10% consisting of characters standing around looking cross; for instance, here Mace Windu can single-handedly destroy an entire droid army and a gigantic hole punch with his bare hands, even though if he could do that in the movies, the Clone Wars would've ended at Geonosis.

Star Wars: Clone Wars is not to be confused with Star Wars: The Clone Wars, which looks like Toy Story meets Lego Star Wars, and where Anakin is a protective older brother like figure to an apprentice as Obi-Wan had been to him; no, in this Clone Wars, Anakin just got his license to kill and the ability to legally drink his flashbacks of massacring villages of Tusken Raiders away at the cantina. Clone Wars, like the Star Wars Holiday Special years before it, introduced a cool new villain, yet still officially never happened, for history, as they say, "is re-released as a special edition by George Lucas."

The first volume's works are painted on 3–5-minute canvases, a masterwork of miniature paintings from the Middle Space East, with the exception of the last one which is a seven-minute heraldic tapestry.

The final series of five paintings expand the canvas size to fifteen minutes through a series of fear paintings, murals, hide paintings, biombo screens, and iconoclasts.

Animator Genndy Tartakovsky was chosen by Emperor Lucas as his apprentice on the strength of his skill at the animated sword. Tartakovsky realized that the principles of the sword and the brush were one and the same, like in that movie Hero with Jet Li, so he had the production crew train in swordsmanship and calligraphy in a Shaolin monastery learning to capture the monks' movements. To see how special forces operate, they watched Band of Brothers marathons, and also went and drew Navy Seals at the zoo.

Volume Two shares aspects of its storyline with the Expanded Universe/Legends novel Labyrinth of Evil by James Luceno. Both works were based on the same manuscript, and Lucasfilm wanted them to fit together, but Tartakovsky ultimately turned his nose up at Luceno's cerebral writings and instead went in a more flashy, actiony direction. In the novel, Anakin and Obi-Wan pursue Count Dooku in the LiMerge Power factory on the planet Tythe, and Anakin literally brings down the house through his Force-scream. However, in the series, Anakin and Obi-Wan investigate a possible base for Grievous on the ice planet Nelvaan, meet some blue dogs, and end up going on a spiritual journey. As everything in the Star Wars EU required a convoluted square-peg-into-round-hole explanation, Holocron continuity database manager Leland Chee explained that at the end of Labyrinth, Obi-Wan and Anakin got the call from Sheev to rescue them, flew their starfighters out to hyperspace rings, but then decided "Nah", detached from their hyperspace rings, went back into the crusier, went to Nelvaan to play with some blue doggos, got another call from Mace to rescue Sheev, and then finally flew to Coruscant to rescue him.

In the end, Tartakovsky was betrayed by his master's promise of leading Lucasfilm Animation into a new renaissance, with Lucas instead hand-picking Avatar Dave Filoni to produce the following Star Wars: The Clone Wars CGI series. But Genndy would lose more than just Star Wars, as Clone Wars grew like a parasitic twin birthed from the side of his other series Samurai Jack, leaving its host comatose for twelve years. Genndy and the animation crew were fighting a war on two fronts and planned to come back for Jack after the end of the Clone Wars, but were ultimately unable to save both shows. Like dancing in a fairy circle or a relativistic time dilation from a war fought with near-lightspeed space travel, everything about Cartoon Network and its lineup had changed, and the Samurai could not return home until 2017, when Adult Swim resurrected his series.

Many fans have wondered how Grievous went from being a badass here to just plain garbage in Revenge of the Sith. Originally it was theorized that Mace caused this, but thanks to the new CGI The Clone Wars (which takes place before this incident), not anymore...

The first volume was released on stained glass DVD in March 22, 2005 with the second following suit on December 6, just in time for Life Day. Due to a tight schedule and production issues, Volume Two was released a month later than the DVD of Revenge of the Sith; this frustrated fans, as for a whole month they would be unable to complete their Star Wars movie marathons, forcibly having to skip from Volume One over to Revenge and left wondering why Anakin is a Jedi Knight now, why his hair is long, why General Grievous is lame now and sounds like a wheezing Russian, how Palpatine got kidnapped, etc.

Like the Star Wars Holiday Special, Filoni would try and have every copy of the series thrown onto a fire and burned in an iconoclasm, as ordered by Emperor Lucas for his final order, before allowing Disney to buy him out and strike him down in 2012. However, Disney finally repented in 2021 and re-released the 2003 Clone Wars on streaming service Disney+, as part of the "Star Wars Vintage Collection" (alongside significantly older series like the Droids and Ewoks cartoons). 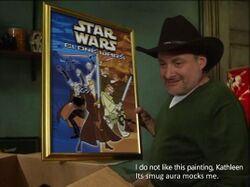 Many fans and critics were tricked by painter Tartakovsky's visual allusions to classic war films and kung-fu cinema, seduced into thinking there was a chance Revenge of the Sith would be like the reverse of Return of the Jedi and be the only engaging entry in an otherwise tepid trilogy. Many questioned what the economic reasons for the Clone Wars were, why the Jedi would accept a slave army, or why they'd make a man who massacred a village of women and children into a general with honors instead of defrocking him, but most were just glad they got to see Anakin act like a trustworthy adult instead of a hyperactive child, horny teenager, or psychotic mental patient for a full two hours of cosmic chambara. "Unlike some other movies, you won't regret the spent time watching Clone Wars. It gets the job done. 9/10 It's Okay," said Matt Casamassina of IGN.

The series managed to earn two Emmys, but this only nonplussed Lucas more. Other people's success with the hands-off hand George dealt them was like rubbing salt into his wounded pride, so in 2008 George made his own CGI Star Wars: The Clone Wars with Dave Filoni. Finally, in 2014 Disney officially struck the 2D Clone Wars from Star Wars church canon, even though in the new series they never actually show us how Anakin was knighted or how the Jedi first met Grievous and Ventress. In the new series, Grievous is portrayed as being a mustache-twirling cowardly wheezing Russian from the start, unlike in the old series where he used to be a badass Brit but became a coughing Ruskie coward after Mace smashed his internal organs (apparently Force-crushing one's chest affects not only their physical strength and abilities, but also their ethnicity). Anakin is also said to have become a Knight seven weeks into the war, much sooner than the original series where he had to agonizingly trudge through two-and-a-half years of offscreen war labor (told mostly in comics and novels) to reach a promotion. Also the action scenes in TCW are much less intense, as unlike most wars, capes appear scarce in 2008's The Clone Wars because CGI capes are a pain to make look realistic, and the same goes for underwater lightsaber fights; Lucasfilm certainly wasn't about to shell out Pixar-level money for each episode. Nevertheless, Anakin's Padawan Ahsoka does inspire girls to become officers in wars no one understands the reasons and terms for.